You’ll see car radiators on virtually all road-going vehicles. The car radiator fan is an essential component of the cooling system, which blows off heat from the radiator fins and helps keep the engine at average operating temperature.

A lousy radiator fan can be detrimental to your car engine. It can cause overheating, which could damage several components, leading to a costly engine repair.

When you start your engine, the fan will not blow until the engine gets to an average operating temperature. Depending on your vehicle model, this can take between 5 to 15 minutes. You can shorten this interval by placing a load on the engine.

A common example is to turn on the air conditioning system. But what if the radiator fan does not work even after reaching the engine’s normal operating temperature and even after turning on the AC? Of course, that can happen, but it’s not normal.

You may wonder, what happens if your radiator fan stops working? You’ll find out as we progress along. But first, let’s see what could cause the radiator fan not working when AC is on. 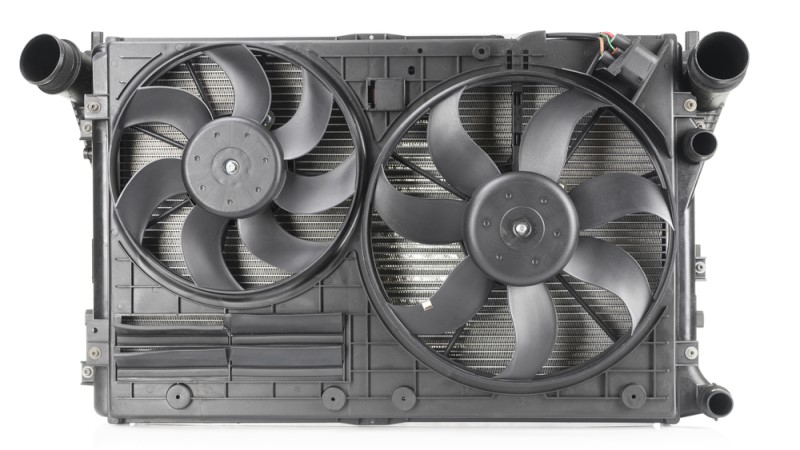 What Causes the radiator fan not to work when ac is on?

A few parameters can cause a radiator fan not to work even when the AC is turned on. In any case, it is important to note that if the fan doesn’t blow at all both when the Ac is off and on (which is likely the case), the fan is totally bad.

Factors like a blown relay, bad temperature switch, a blown fuse, frayed wiring harness, and low coolant temperature can prevent the car radiator fan from coming up when the AC is on or off. The last probable culprit on the list will surprise you. It is possibly the culprit if the fan blows every other time but doesn’t come on when the AC is on.

Fuses act as a shield on electrical and electronic components. By this, they protect corresponding components from damage due to electric bridges or surges.

No or low coolant

If your radiator fan is not working but not overheating, chances are you have no coolant inside the reservoir. This is because the temperature sensors in cars do not read how hot the engine is. Instead, it tells the engine temperature by calculating the hotness of the engine coolant.

Conversely, if the coolant level is low, the reservoir will be filled with air, causing the temperature sensor to signal false readings. This should be the first or second thing you should check when the radiator fan refuses to blow even when the Ac is running.

Since the radiator fan draws much power from the electric flow in the vehicle, most auto manufacturers install a relay that regulates it. However, relays can damage and prevent current from passing to the corresponding components.

The cooling fan relay fuse is often located in the fuse box or a separate box close to the fuse box in the engine bay. First, however, visit your owner’s booklet to track where the relay is and inspect it.

As reiterated above, some manufacturers install car fan control modules to regulate the cooling fan. This component is located in the engine bay. The module can fail due to heat from the engine compartment, or corrosion or dust, depending on the exact location in your specific vehicle.

When the cooling fan fails to turn on both when the AC is on and off, the fan itself can be the culprit. The cooling fans have an electric motor inside that powers them to spin.

If the motor fails, it won’t power the fan blades to spin. If only one radiator fan is working, check the other one. It could be the electric motor is pretty bad, or there’s a wiring issue within the line.

If the cooling fan is not turning on even when the engine is running hot, broken wiring or bad wiring connections can be the culprit.

As there are different vehicle manufacturers, there are also different underhood working principles. For example, if your cooling fan doesn’t work, especially when the air conditioning is running, you probably have a bad expansion valve on the high-pressure line.

This may not be possible on some cars, but I have experienced it on a 2003 dodge caravan SE. A customer drove this dodge caravan to my garage to fix the air conditioning system. After that repair job, everything worked fine, but the electric fan didn’t come on. So I checked the voltage and relay and even inspected the fan. The fan seems okay, but no voltage and no relay.

After running back and forth for some minutes, I removed the high-pressure sensor and cleaned it thoroughly, and that solved the problem. So if you’re facing this problem, inspect the AC high-pressure sensor. It could be why your cooling fan is not working when AC is on.

How To Fix Radiator Fan Not Working When Ac Is On

Since there are several causes of radiator fans not blowing even when the AC is running, there are also several approaches to rectify the issues. Let’s look at how to make a radiator fan turn on in situations like this. When a cooling fan is bad, the only reasonable option is to replace it. However, you may decide to change only the blade if that is the culprit. But in most cases, the electric motor is usually the cause. If that is the case, you’ll need a complete replacement to fix the issues.

Firstly, inspect the fan by slightly shaking the electric fan motor and see if it wiggles. The fan should be firm and steady.

Inspect the relay and fuse

Locate the 50 amp fuse that safeguards the cooling fan. First, you can check this article that explains what a blown 50 amps fuse looks like. After that, locate and examine the cooling fan relay. If you can’t determine a dead relay, check out this guide on how to tell if a relay fuse is blown.

Once you detect a blown fuse or relay, replace it with a good fuse with the same amperage. Relay and fuses are one of the cheapest components in a car. Replacing them can be all you need to resolve the fan problem.

Check the coolant level and the temp sensor

Check the wiring and the fan controller module

Check the wiring harness that connects to the controller module and the fan itself. If you see a frayed, burnt, or disconnected wiring, fix it and see if that resolves the issues. Lastly, a dead fan controller module can prevent the fan from blowing both when the fan is off and on.

Therefore, inspect the module and replace it (if necessary).

As reiterated above, if your radiator fan is not working when the air conditioning system is on in a dodge 2003 caravan, inspect and clean or replace the high-pressure line sensor on the AC lines.

Q: Should the radiator fan run when AC is on?

Yes. Both the radiator and condenser cooling fan are expected to turn on the moment you switch on the air conditioning system. For instance, it is expected for the cooling fan to switch on when the engine carries loads or once it reaches the normal operating temperature.

Q: Should the condenser fan run when AC is on?

If you’re like me, there’s no way you will enjoy summer rides without the air conditioner working properly. Without proper cooling inside the cabin, your driving experience becomes dejecting. The AC unit comprises several system components that work together for optimal operation.

Anytime you switch on the AC, the fan should be running because it works in unison with other AC system components. Therefore, if you start the vehicle and turn on the air conditioning system to see that the fan is not running. Examine the cause and fix it immediately.

Q: Does the thermostat control the radiator fan?

The thermostat in a car plays an important role in keeping the car at the optimal temperature. It opens and closes when necessary. When the coolant temperature inside the engine is below the average operating temp, the thermostat stays closed and prevents the coolant in the radiator from entering the engine.

But immediately the coolant inside the engine reaches the normal operating temp, the thermostat will open, allowing cold coolant to travel to the engine and hot coolant back to the radiator. The radiator fan starts blowing at this point, whether the AC is on or not.

However, if the thermostat is stuck in a closed position, it’ll not allow coolant passage. As a result, the powertrain control module may feel the engine has not reached the normal operating temperature and prevent the fan from working.

Q: What is the difference between a condenser fan and a radiator fan?

The condenser fan and the radiator fan expel heat from the condenser and radiator. Both fans turn on once you switch on the air conditioning systems and work based on the engine temperature. Therefore, there is no real difference between the two.

Q: What happens if the condenser fan doesn’t work?

Several parameters like a lousy capacitor, defective contactor, burnt motor, or damaged fan, can cause the condenser fan not to turn on. If any of these reasons cause the condenser fan not to come on, especially in summer, some air conditioning system components may overheat and trip the circuit breaker. If the circuit breaker is triggered, the entire unit will shut off.

The radiator or cooling fan is essential in preventing the engine and air conditioning systems from overheating. They ensure the engine runs at an adequate temperature. However, they can fail and cause engine overheating.

Of course, you don’t want this to happen. We have provided the causes of a radiator fan not working when AC is on and how to rectify the problem. Follow the above steps to track and fix the culprit. Finally, if you don’t trust your guts, contact your mechanic to proffer solutions to the problems.