The torque converter plays a significant role in automatic transmission vehicles. It needs to be in good working order if you’re going to have a nice and smooth ride. If it fails, you’re in trouble. The torque converter is a fluid or hydraulic coupling that converts rotating power generated by the vehicle rotating driven force to mechanical power.

The torque converter of every automatic transmission vehicle has four parts. 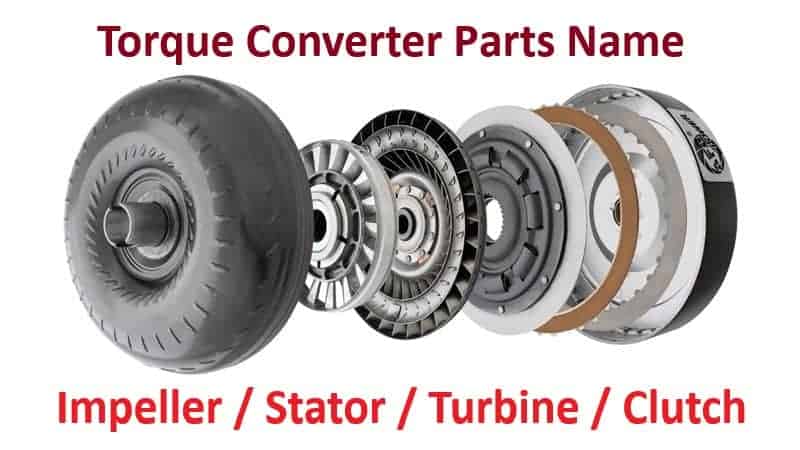 Turbine: The expelled fluid from the impeller pump goes into the turbine’s blades. The turbine is connected to the transmission’s internal parts, it causes the transmission to spin, and provides power to the wheels.

Clutch: The clutch is used to lock up the transmission in high gears, preventing it from slipping. The clutch is usually found in the modern clutch converter. They are typically called friction clutch.

Read Also: Manual vs. Automatic Transmissions: Which is Better? 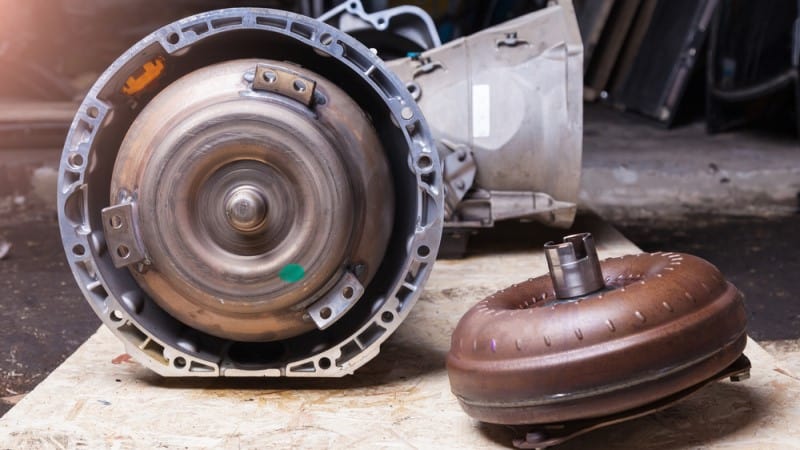 Signs and Symptoms of a Bad Torque Converter

Issues with a failing or lousy torque converter are often misinterpreted as transmission problems. As a result, car owners will wind up spending thousands of dollars replacing or rebuilding their transmission. They might not know that the issues lie within their torque converter, which is lesser than the transmission itself.

If the torque converter goes bad, the vehicle engine is required to do more jobs to sustain the same engine speed. The engine will require more revolutions to operate per minute, which will reduce fuel economy and fluid pressure. In the worst scenario, the system will create more heat which could cause issues for other components. Let’s quickly look at signs of a bad torque converter.

If you’re experiencing a soft or delayed gear shift, chances are, you have a lousy torque converter. This is mostly a result of lowered pressure output. Instead of having a nice and crisp transmission shift, you will experience a rough and abnormal gear shift. The best way to get that crisp and nice gear is to increase the torque converter output pressure by increasing the engine RPM.

If you have inconsistent torque converter output pressure, it could result in a sudden increase or decrease of the vehicle speed by the torque converter. At that moment, the throttle will start malfunctioning because there will be varying fluid pressure. When this happens, It could be dangerous to drive your vehicle, so don’t drive it until you fix it. You may experience a shudder feeling, but you shouldn’t forget to call your mechanic to inspect the transmission mounts and tighten them if they are loose before inspecting the torque converter.

If your car vibrates or shakes while driving 30 mph to 45 mph, chances are you have problems with your torque converter. The vibration might seem like when you’re driving on a bumpy road, so you can easily spot it. The shuddering feeling will not be a consistent thing. It usually happens and goes away suddenly. You should call your mechanic to inspect your transmission once you notice it the first time.

A lousy torque converter will easily showcase Itself because it cannot manage fluid properly. It will either take too much or too little fluid into the transmission, causing gear slippage, resulting in low acceleration. There will be a decreased fuel economy as well. The transmission fluid might reduce too. You should always check your transmission fluid whenever you notice transmission slippage.

Every car has some kind of noise they make. When you drive your car for a long, you should tell when something is wrong by listening to the car noise. Likewise, when a vehicle torque converter fails, the car will give a bad torque converter noise–a whining or whining sounds like a power steering pump with little or no fluid in it. The torque converter is built with a clutch mechanism; when the mechanism fails, you’ll notice a whining or rattling noise that might not be heard when the car is in the park.

When two issues are combined, it could be something that is out of place with your torque converter. The apparent meaning of a transmission overheating is that the torque converter cannot efficiently transfer power from the engine to the transmission.

Read Also: Transmission Shifting Hard From 1st To 2nd: Causes and How to Fix

How to fix torque converter problems 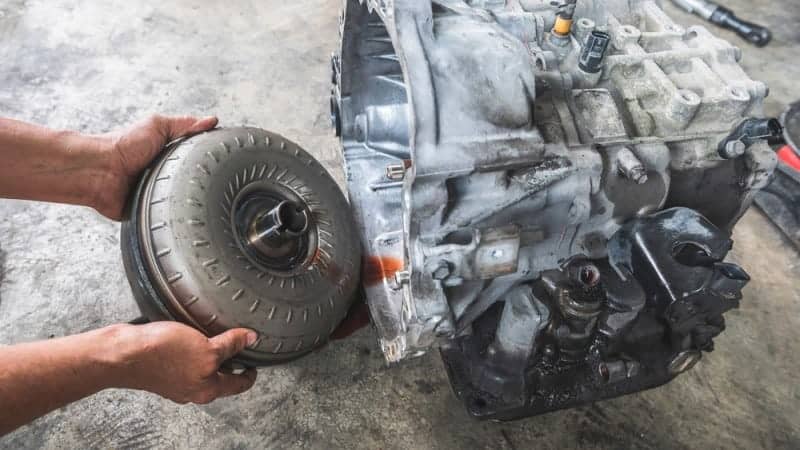 What you should do to fix overheating and fluid leaks: low transmission fluid level is usually caused by fluid leaks, which could result in overheating. Aside from overheating, low fluid can also cause shuddering and slipping. To fix this problem, you have to find why the fluid is leaking (usually a damaged seal) and replace it.

What you should do when you have a contaminated fluid: If you find out you have grits and grime in your transmission fluid, it indicates a more significant issue in the transmission or torque converter, and you should never ignore it. This shows things are going out of place, and you should take the below step or contact your mechanic.

Step 1. Pack the park and lift it:  Park the vehicle on hard and level ground. Then, block off the wheels and lift the car so you can quickly go under the vehicle. Remember to support the car with Jack stands. Car Jacks alone are never enough to support a vehicle. Grab your mechanic lay-board and slide it under the car.

Step 2. Drain the transmission fluid: Slide under the vehicle and unbolt the transmission sump to drain the fluid. Ensure you position the waste oil catch pan directly under the transmission so you won’t mess up the garage floor. After the drain, fill the fluid in a container and dispose of it later. Put the sump back in place and snug it with your hand. Take the right tool you used earlier and torque the sump.

Step 4. Lower the Jack and start the engine: Now, you would want to remove the Jack stands and lower the vehicle. Start the engine and re-gauge the transmission fluid. Add more fluid if need be. Once the fluid is gauged, you then move to the next step.

Common Torque Converter Issues and How to Avoid Them! YouTube Video

Q: What does a bad torque converter sound like?

It is known that every vehicle makes a sound. Knowing your vehicle’s sound will save you a lot and tell you when something is wrong. If the torque converter starts failing or it’s completely gone, it will give some odd noise like whining or rattling noise. The sound will come on and suddenly disappear within seconds.

Q: Will a bad torque converter throw a code?

The query, will a bad torque converter throw a code – has been a concern to an average car owner. This question has been asked zillion times in automotive forums. A lousy transmission solenoid will register a diagnostic trouble code (DTC) which will trigger the check engine light to pop up.

Q: Will a bad torque converter make a knocking sound?

A bad TC will make an odd sound like a piston slap or a knock con-rod if you have loose torque converter bolts. But it’s just the torque converter hitting the flex plate. Fixing this sound will only require tightening the bolts as long as it hasn’t affected anything yet.

Absolutely yes. A lousy TC can cause transmission fluid degradation, overheating, and friction damage. The more you ignore the torque converter problems, the more it causes damage to the transmission.

The repair or replacement cost of the torque converter is inexpensive compared to the damages it could cause to the transmission if ignored for long. Therefore, it is important to diagnose and fix torque converter problems in the earlier step.

link to Transmission Fluid Flush vs. Change – Which is Better?

The transmission is as important as the vehicle engine because the car will not move from point A to point B without it. It is also a critical car component that needs proper maintenance for optimum...

Continue Reading
link to Can Transmission Fluid Get Low Without A Leak?

Can transmission fluid get low without a leak? This seems confusing because all that most people know about fluids getting low is through the puddles beneath the car that reveal a transmission...