If you are an auto-engineering enthusiast, especially in the auto-sport field, then you might have come across the term, revving an engine. The engine rev is the sound that comes off when you sharply accelerate the engine speed. It is mainly associated with showmanship in the sporting field, though it has many purposes, as we will later see.

For anyone interested in how to rev an engine, you need first to know the purpose behind this action. The good thing is that this piece will cover everything you need to know about revving an engine and how to be a pro.

What Does It Mean To Rev An Engine?

Revving an engine refers to accelerating your car’s engine’s speed resulting in the unique sound produced. The more you press on the gas pedal, the louder the sound gets, giving you an idea of the revs up meaning, increasing the rev.

Revving has the primary purpose of boosting oil circulation in the car. It draws from the practice in races where drag racing cars needed a higher revolution per minute level for oil to circulate sufficiently. The oil starvation was severe if the engine was idle.

Revving is not only a thing of cars, as you may notice motorcycles, especially the sports performance ones doing the rev before they take off. It is more of a cosmetic thing, but you may do it to improve the oil flow in your car for a smooth driving experience.

When revving up, the tachymeter on the dashboard will show you the revolutions you are making.

Another area where revving proves to be vital is in boosting up a battery, especially if it has charging issues. It comes in handy after a jumpstart to retain the charge to power the car.

In cold conditions, revving up may heat the engine to the right temperature for it to move. This is true, particularly in snowy areas where the cold temperature may make the engine stall. It also helps build up some heat in the cabin to make it bearable.

Coming to a common question, is it good to rev your car occasionally? Yes, it is good to do it occasionally; however, do not redline it as you may damage the engine.

Most modern vehicles have the rev limiter, which is preset by the manufacturers, and they restrict its maximum speed.

How to Rev An Engine: Step By Step 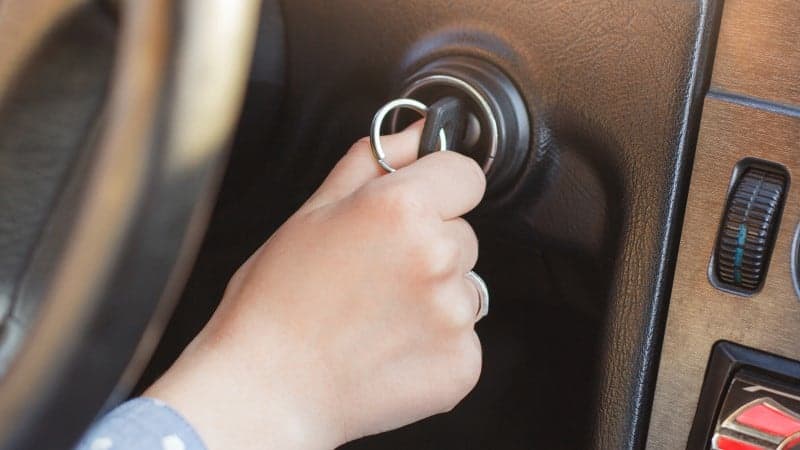 Before you rev the engine up, it should be running; hence you should turn it on.

Step 2: Give Time for Oil Circulation

Once the car is on, allow it to idle for 20-30 seconds. During this time, oil circulates to all moving parts of the engine. Considering revving will bring about a lot of motion in the engine, lubricating its parts prevent damages.

Step 3: Press On the Accelerator

You then press on the accelerator gradually and shift the gear stick to neutral. You will notice that the engine moves smoothly due to the oiling. The needle on the tachometer will start moving, going to the higher values as you press harder on the gas pedal. Keep your eye on the RPM dial, making sure the needle does not reach the redline. Exercise steadiness and keenness when shifting from neutral to drive when revving.

Read Also: Car Starts But won’t Stay Running (Reasons and How to Fix It)

Revving an Engine When Parked

You can also rev your car engine when parked, which is how many people learn about it. The following are the steps to follow when revving up a parked car.

Just like in the previous model of revving the engine, you have to turn it on and leave it in the state for up to 30 seconds. As earlier hinted, this allows oil to circulate.

You then adjust the stick shift to parking mode, to prevent the forward or backward movement of the car. This is a critical step in exercising care; otherwise, the car may move and cause an accident. To be on the safe side, engage the emergency brake.

If you are a pro, you can try revving when the car is on neutral.

Step 3: Step on the Gas Pedal

You can then have some fun revving the car by pressing steadily on the gas pedal. Keep your eyes on the tachometer, making sure the needle does not reach the redline. Press it more times then release the accelerator.

How to rev your engine in a manual

You can also rev your manual car when driving; the same way sports car drivers show their appreciation of speed and power. On how to rev a manual car, you start by stepping on the clutch to have the transmission system free. You then gradually step on the gas pedal, being careful not to redline. You can now shift the gears.

Read Also: Car Died While Driving And Won’t Start [Causes and How to Fix It]

Is It Bad To Rev Your Engine?

Revving your engine once in a while is not bad, especially when you consider its various benefits, such as promoting lubricant circulation and warming of the cabin. However, you should not redline when revving, which is reaching the red line in the tachometer. It may damage the car engine.

How Do I Rev My Engine While Driving?

When driving, you can rev your engine by pressing the brake and then placing the gear shift to neutral. Then steadily step on the accelerator and watch the needle go up a higher limit on the tachometer dial. This is for automatic cars.
On how to rev match manual cars, you focus on bringing the engine speed to that of the transmission, resulting in a smooth transition to the preferred gear. You press the clutch and step on the gas pedal to rev up the vehicle.

Do You Rev The Engine In Park Or Neutral?

When revving an automatic vehicle when not moving, it is advisable to put it in park mode. However, when driving, you can put it in neutral.

Is Hitting The Rev Limiter Bad?

The red line on the tachometer indicates going overboard when accelerating your engine speed. When you hit the rev limiter, you are going past the acceptable revolution limit; hence, you can cause engine damage.

Should I rev match?

Rev matching is acceptable as you adjust the engine speed to be on the same page with the transmission rate. It is suitable for the engine as it strains less. Get lessons on how to rev match to pull it off correctly.

How To Rev The Engine In An Automatic Car YouTube Video:

Revving your car engine is one of the coolest things to do, especially if you have auto-sport leanings. This article digs deeper into the whole revving concept, looking at what it is, its benefits, and how to rev a vehicle engine.
Follow the guidelines for both the parked and driving modes and for automatic and manual transmissions to pull it safely.

link to Symptoms of Bad Tie Rod Ends: What You Should Know

Have you ever noticed that annoying vibration when seated in a vehicle as it accelerates? Well, that could be due to a bad tie rod end. Reduced ability to steer, squeaky sounds from quick turns, and...

Windshield wipers are great for safe driving, as the rubber wiper blade moves across the windscreen, taking out dust, moisture, and films of ice. Thus, it ensures that drivers get a clear vision...