It disrupts electric currents’ flow, thus making it ideal for sealing and lubricating rubber parts of electric connectors. We shall discuss more dielectric fluid, its application, how dielectric grease is used, types of dielectric grease, and its difference from regular grease.

How to Use Dielectric Grease

Ensure that the grease does not touch the path of electrical currents or where parts are connecting. This is because the grease is an insulator, and it disrupts the flow of currents. Therefore, it is recommended to use dielectric grease on surfaces of electrical parts where the currents are not passing.

When using dielectric grease for an automotive tune-up on a diesel or gasoline engine, start by applying a little grease at the end of a spark plug wire’s rubber boot and spread it only to cover the inside lip. This prevents high voltage electricity from flowing to the boot and leaking from the engine block. It also makes it less difficult to put the boot over the ceramic insulator. It creates a watertight seal around the spark plug, protecting the connection from dirt and water.

In a high-energy ignition system, dielectric grease is used to prevent voltage leakage. You can also use it with other connectors and terminals such as heat shrink terminals, spades, rings, and butt connectors. Dielectric grease is often used on electrical connectors, especially the ones with rubber gaskets. In this case, it works as a sealer and non-conductive lubricant for the connector’s rubber parts. The dielectric grease spray enables you to meet parts that your fingers cannot reach.

Another wide application of this grease is in spark plugs and other high-voltage connections. Applying the dielectric grease on the rubber boot of the spark wire enables it to slide easily into the ceramic insulator. It seals the rubber boot and prevents it from getting stuck in the ceramic. Most spark plugs are used in high temperatures, and dielectric grease is made to withstand those high temperatures. 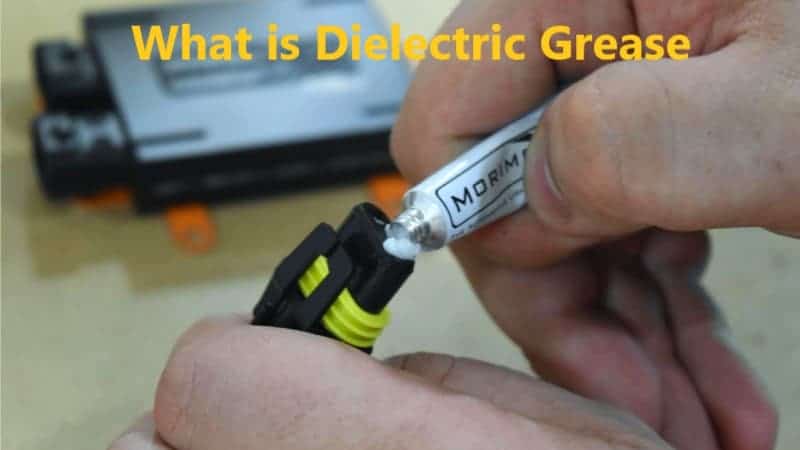 Different Between Dielectric vs. Regular Grease

Regular grease is also different from dielectric grease in terms of cost. Dielectric grease is more expensive compared to other types of grease. However, the advantages that come along with the grease are worth the cost. Unlike other greases, dielectric grease does not dissolve in liquids such as water, ethanol, mineral oil, and methanol. Therefore, it is ideal for both outdoor and marine applications.

Dielectric grease has a lot of advantages, especially when used correctly. One of its major advantages is providing a seal on metal surfaces. When the grease is applied to metal parts of the electrical system, it protects them from rusting and corrosion. This grease withstands high temperatures, and thus it will maintain the seal up to a maximum of 500 degrees Fahrenheit.

This silicon-based grease also insulates the electrical system and prevents the buildup of the insulative oxide layer that increases signal loss and resistance. Dielectric grease is most important for multi-pin connectors, thus eliminating any short between the pins. It is used for lubricating engine components such as speedometer cables, distributor caps, and rotors.

The grease produces formaldehyde when used at high temperatures and can irritate the respiratory system and eyes. Always consider under what temperatures you will use the grease before applying.

What is dielectric grease, and why should I use it? YouTube Video

Q. Can I Use Dielectric Grease On Battery Terminals?

You can use dielectric grease on battery terminals to prevent corrosion and fusing. However, applying the grease wrongly will block any currents from flowing. Dielectric grease also protects the terminals from moisture and dirt.

Q. Is Silicone Grease The Same As Dielectric Grease?

Dielectric grease is a type of silicon grease. Silicon grease is made by mixing silicone oil with a thickener. The moisture becomes a white viscous paste, which is water and fireproof. The exact properties of silicone grease depend on the proportions and types of components that have been used.

Q. Can Dielectric Grease Be Used On Circuit Breaker?

You can use dielectric grease on circuit breakers but with caution since not all parts should be greased. This should only be done in corrosive atmospheres. At times, the circuit breaker’s manual recommends that you lubricate some specific current-carrying parts on the breaker.

Some of these parts are bus stands, primary-circuit finger clusters, and main contacts. It would help if you were extra careful when deciding on what current-carrying components should be greased and those that should not. It is advisable to go through the circuit breaker manual to make sure you are lubricating the right components.

Q. Can I Use Dielectric Grease On O-Rings?