Motor oil no doubt helps lubricate and keep the engine cool for optimal performance. However, to carry out this function effectively, it must retain specific viscosity in certain temperatures. This is true because oil changes its state depending on the temperature. 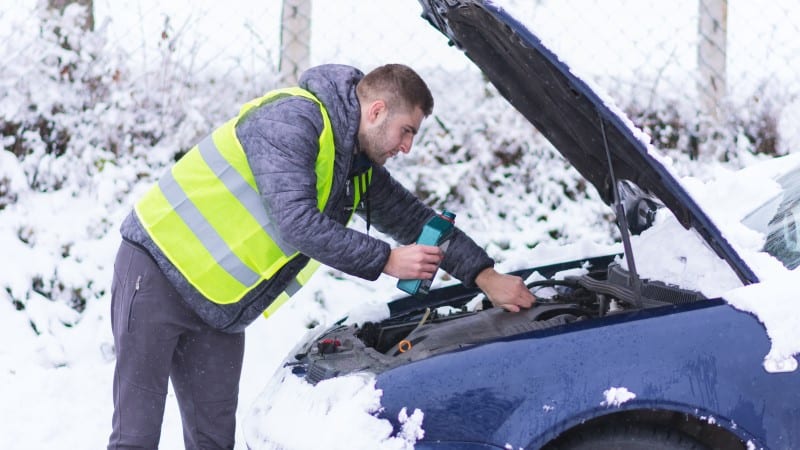 What temperature does motor oil freeze?

Before we talk about the freezing point of motor oil, understand that motor oil doesn’t really freeze. If we go by the true definition of freezing, the liquid has to be in its solid state to say it has frozen. However, when motor oil is exposed to very low temperature, they get thickened, which invaluably causes oil to flow slowly and no longer be able to lubricate properly.

With the understanding above, at what temperature does motor oil freeze?  The freezing point of motor oil in Celsius lies between –20°C and –60°C. However, the exact temperature it freezes will depend on the oil viscosity, additives used, and the type of motor oil. Usually, oil with lower viscosity handles a colder atmosphere better than oil with high viscosity.

Oils also contain additives with low or high freezing points. The lower the freezing point, the better they can handle lower temperatures. Now, about oil type, there are three major types of motor oil—synthetic, semi-synthetic, and mineral oils.

Synthetic oil is suitable for high mileage or performance vehicles and takes longer to break down. Hence, you can keep it for long. And because of its additives properties, it handles colder atmospheres better.  Synthetics can freeze (thickened)  at temperatures as low as –60°C. Hence, a good fit for cold weather.

Semi-synthetic is a combination of regular and synthetic oil. So it practically possesses the properties of both oils. While not as cold tolerant as full synthetic, it also holds up well at lower temperatures. Semi Synthetics will start freezing at –45°C

There is also conventional oil, also called mineral oil. They are the cheapest in the market and are useful for cars that mostly commute shorter mileage. Its additive properties are not as strong as the two oils mentioned above, and it’s estimated to freeze at –20°C. Which means they get thicker quickly with a slight fall in temperature.

What happens to oil when it freezes?

As stated above, motor oil doesn’t actually freeze. It changes its texture and consistency to an almost solid texture/form in low temperatures. So what happens when it freezes?

When oil gets thicker at lower temperatures, it loses viscosity, slowing its flow rate.  As such, oil won’t get to every engine parts in time to lubricate the engine. Because your engine doesn’t get lubricated properly, parts might start grinding against each other, invariably causing engine damage.

How to prevent motor oil from freezing

Generally,  oil does give in to cold weather. And as you already know, thick or frozen oil is bad for your engine, so how do you avoid oil freezing at low temperatures?

Your vehicle’s coolant runs with antifreeze that helps prevent the engine from freezing during winter. The same can be done with engine oil. This antifreeze has a lower freezing point, making it tolerable in cold weather as it can practically prevent the oil from thickening.

So you can as well add antifreeze to your motor oil. But ensure you follow the instructions on the bottle’s label on the amount of antifreeze to add.

Heating your oil is another way of thinning your oil.  Usually, the thinner the oil, the less likely it freezes. So you can heat the motor oil before using it. However, ensure you don’t overheat, so it doesn’t lose all its viscosity.

Keeping engine oil in warm places can also prevent it from thickening out. So if you live in regions that experience cold weather, a good way of preventing oil from freezing is to keep it in places warm enough to retain its natural viscosity. Here, a space heater may suffice.

While this might sound like an expensive option, it’s much cheaper compared to the cost of a new engine. As oil works and gets exposed to cold, it doesn’t only thicken, it also collects water along, both of which are bad for your engine. So regularly changing your oil will ensure you run with motor oil that is good for your car.

Oil comes in different types and grades. Usually, synthetic oil takes a longer time to succumb to cold. So chances are if your synthetic isn’t exposed to an extremely low temperature, it may never freeze. It takes the atmosphere to be as low as –60°C for a full synthetic to start freezing.

Oil also comes in different grades, irrespective of the type or brand. While some are good in summer, some come in handy in winter. Let’s compare these two oil grades—0w30 and 5w30. The 0 and 5 here show the temperature at which these oils will start freezing; usually, the lower the number, the longer it takes to thicken. Here, the 5w will give in faster to cold than 0w.

Therefore, because the 5w30 oil freezing point is higher, it will be safer to go with 0w30. Chances are, if you don’t get exposed to an extremely low temperature, the 0w30 might never freeze. 30 here is their oil viscosity which means both have the same level of thickness. The lower this number, the better; oil with lower viscosity takes longer to thicken. 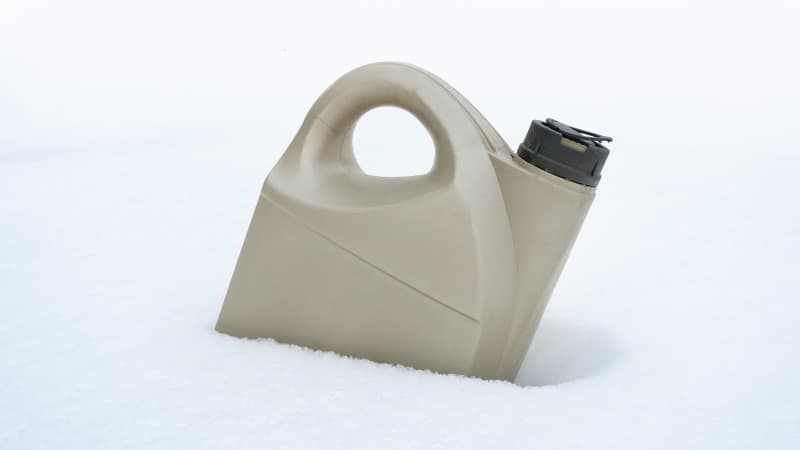 Q: Does oil freeze in winter

This brings to mind, what about olive oil? Does it freeze in winter? If yes, at what temperature does olive oil freeze? Olive oil does succumb to winter, as it slowly changes from liquid to a butter-like texture. But for this to happen, it has to be exposed to a temperature of about 12°F (54°C) though the actual freezing point for olive oil is 10°F.

And how much it freezes will depend on the kind of olive oil since they contain different percentages of waxes. This wax typically determines how fast and at what temperature it will change from liquid to solid. But if you’re using winterized olive oil, it won’t freeze at all. Winterized olive oil is olive oil that has its wax removed so it doesn’t freeze in cold weather.

Synthetic motor oil, like other motor oil, can freeze or, rightly say, thicken when exposed to a temperature lower than its capacity. The reason many suggest synthetic in cold weather is the fact that it’s more tolerable than conventional oil.

And as such will take a longer time to freeze when exposed to the same temperature as other oil. So, at what temperature does synthetic oil freeze? Synthetic starts thickening at –60°C.  While conventional, on the other hand, increasingly gets thick at –20°C

No, motor oil does not freeze solid. They constitute different compounds and won’t turn solid as water does because it doesn’t have a specific freezing or melting point. But instead, it has a temperature range where it transits. So here, as the temperature drops, it begins to lose its viscosity, becoming thick. The colder it gets, the thicker it becomes.

With a good coolant, a car’s engine can begin to freeze at–34°F. But understand that the engine doesn’t actually freeze; instead, the engine gets subjected to different conditions, causing a no-start situation.

At lower temperatures, the car battery can get weakened, drawing the battery reserves to their limit. Oil can also get thicker, especially if the viscosity is high. Even coolant and gasoline can thicken at lower temperatures. Hence, making it difficult to start the engine. It is, therefore, vital to protect engine components during these times. How?

You can use special engine oil with lower viscosity during winter. You can also add antifreeze to your gas tank and coolant to lower its freezing point. To add in line, keep battery active by using a blow block heater; with a good battery, you can start your car at even 0°C. Alternative,  park your car indoors.

As the weather gets cold, engine oil gets thicker, losing the viscosity that allows it to flow or lubricate. The thicker it is, the harder the flow rate and ability to properly lubricate your engine. This invariably leads to metal-on-metal contact of engine components which over time can damage your engine.

So does cold weather affect engine oil? Yes, it does. This is why car manufacturers advise car owners to use synthetic oil with lower weight during the cold months, as synthetic has a high tolerance to cold. Synthetic oil will still flow well and lubricate in temperatures as low as –40°C

Q: Should you change your oil before winter storage?

It’s always better to change oil before winter storage, and here is why. While driving, your engine works to produce byproducts such as acid or moisture. Leaving these byproducts in your engine while storing your car over the winter months can harm your engine.

While moisture can result in the formation of rust in engine components, acids can reduce their working abilities. Fresh oil usually takes time before it loses its lubricating and cleaning properties. Therefore, putting fresh oil will ensure the oil still has the right properties to keep your engine healthy.

Q: Which oil does not freeze in winter

Regarding engine oil, virtually all engine oil types can freeze (thicken) in winter. The only difference is the pace at which they freeze. For example, conventional oil contains additives with a high freezing point, so will freeze faster, specifically at –20°C. In contrast, synthetic contains additives with lower freezing points and freeze at –60°C.

Oil does freeze but not to a solid state. It only gets thicker when exposed to cold. So if you are asking, at what temperature does motor oil freeze? Motor oil freezes between–20°C and –60°C depending on the oil. Reminder, driving with freezing oil is not healthy for an engine.

This is because, at this stage, it gets too thick, reducing the flow rate and being unable to lubricate your engine properly. So to keep the engine safe, use thinner oil or oil that can withstand cold—a good example is synthetic oil.  Alternatively, you can heat the oil, add winter additives or change it regularly.