When the ABS light came on, it presented a moment of discovery. It means there is a problem with the anti-lock braking system.

Sometimes the problem is easy to fix, and it can be difficult sometimes. When driving the vehicle constantly monitors the sensors to ensure everything works as intended. Among the systems, the car monitors are ABS or the Anti-lock braking system. Why is my abs light on?

The ABS system monitors the wheels to ensure they are turning properly and at the same speed, if not the lights come on. They help the tires maintain contact with the road surface during heavy braking.

The lights remain on until you fix the core issues. Essentially, the lights alert drivers that their safety system is compromised or is no longer active. ABS helps drivers maintain directional stability and control during extreme braking situations.

ABS is common in modern vehicles and decreases accident risks by 18 percent according to research findings. The system controls the rotational speed of every wheel to make the vehicle move in the desired direction, even if it’s sideways.

What does abs light mean? It means you have any of these issues: 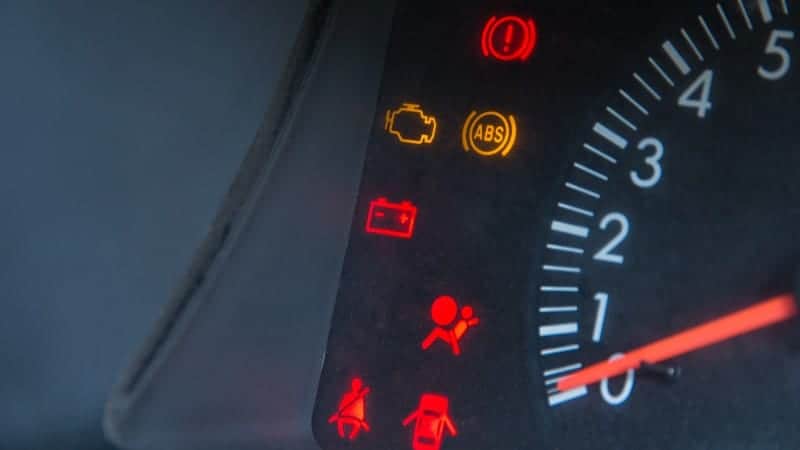 ABS fuse functions like other electrical systems. The fuse protects the ABS system and can blow if there is an electrical surge. Check the fuse, if it’s blown, replace it with a new fuse. If the fuse blows again, then there is a short circuit in the ABS system, check the pump motor or ABS computer.

The fuse is found in the fuse panel underneath the dashboard or under the hood in the power distribution center.

Your ABS uses the brakes to stabilize the vehicle in slippery situations. A problem with this system means the vehicle may not stop quickly. The abnormal wheel sensor light is a precautionary warning mechanism that you have a problem that needs urgent attention. Usually, the ABS light automatically activates when you engage in emergency braking where the wheel locks happen.

However, if the ABS flue level sensor failed, and the level is below a specific point, it leaves the vehicle prone to an unexpected wheel lock. The vehicle tires skid when the ABS system is malfunctioning and you engage heavy braking. Essentially, the vehicle takes more time to come to a stop. This is what causes the abs light to come on and go off.

How Do You Diagnose the ABS Problem?

ABS system work with the braking system to maintain control in case of heavy braking in an emergency like slippery or wet roads. Signs of trouble include rapid pulsating brake pedal or slight vibrations. To determine the issues, perform the following diagnostic steps.

Insert the key in the car ignition and turn it on and off to see if the light comes on the dashboard. Sometimes this solves the problem as it resets the code stored in the system memory. This is how to reset abs light without a scan tool

In case the issue persists, take the vehicle to an auto shop for a scan to locate and fix the code.

If the vehicle won’t stop, apply more pressure to the ABS brake. Check the master cylinder brake fluid level and refill it to the marked level if it’s low. Also, it means that air may be in the hydraulic system, resolve the situation by bleeding the hydraulic system.

Replace any broken or loose front-end parts if there is a clunking noise as you press the ABS brakes.

Do a visual inspection for sensor mount, speed sensors, pigtail, sensor tip in case it’s exposed and check the connector. For exposed tone ring, do a tooth by tooth inspection for damaged or cracked teeth tone ring.

Check the sensor to harness the connector for problems like corrosion, pin problems, or water intrusion. Inspect the ECU connector and pay close attention to pins that may be pushed out.

Check for a loose wheel bearing as it allows fluctuation of the air gap leading to a false activation or DTC.

Perform generic tests to verify that power and ground are getting to the ECU. Proper operation of ABS depends on the proper grounding of ECU and the ECU receiving the right operating power. Locate the ground and power circuits, then perform voltage tests for the power and continuity tests for the ground.

Every new car in the United States has an ABS requirement since 2013. Automakers are including the standard equipment into other vehicle models made in the late 1980s. ABS sensors tell your dashboard controller when your wheels stop rotating when the vehicle is in motion. It’s a sign that the brakes have locked up.

The controller then directs a hydraulic valve to release the brake fluid pressure to the wheels to facilitate wheel rotation again. The process repeats every time until the vehicle stops or your foot is off the brake pedal.

How Do You Fix If ABS Light Comes On?

You know there is a problem the moment the ABS light comes on. How to fix abs light depends on the nature of the ABS problem.

The vehicle can exhibit strange behavior when slowing down in a corner. Also, the vehicle blows past the downhill turn and skids straight and the steering wheel cranks all the way into that downhill turn.

The ABS performs a self-test each time you insert the car key and turn on the ignition. If there is insufficient data during the self-test, or the hydraulic valve or pump stops working, the ABS light comes on. ABS relay on the proper operation of the conventional braking system. So, if other parts of the braking system are working normally, you will still enjoy normal braking without the ABS.

Replace the ABS pump module after ascertaining it’s leaking. The pump is on the driver’s side. Trace the black wire from the bleed abs module to the driver-side fender and unbolt it. Use a wire brush to clean the bolt and lug. Remove all the grime off the parts to leave them shiny and clean.

Apply Di-grease to the lug and bolt on both sides and in the bolt hole. Apply more Di-grease on the bolt and lug surface, including the wire housing. Ensure all metal surfaces are covered in grease.

Test the ABS wheel sensor or scan it for the presence of error code such as C0050, C0046, C0045, C0041, C0040, C0035, etc. The error codes mean your car sensors are not plugged in or need replacement because of a short circuit. Replace the sensor using basic tools like work light, screwdrivers, pliers, and other supplies in your tools box.

ABS controller monitors the wheel rotation speed and can sometimes go out. The computer module is on top of the pump motor and held by 4-5 mounting bolts. If you hear a humming brake noise or the ABS light remains on after turning off the key, then it means one of the valve control coils is already burned out and needs immediate replacement.

Check to ensure the stator ring is not damaged or dislodged, resulting in missing teeth resulting in the activation of the ABS light. A damaged tooth on the stator ring provides intermittent signals to the front wheel sensor. The ABS wheel sensor sends a different error code that looks like a reluctor ring with teeth on it. As the wheel rotates the teeth pass the magnetic speed sensor giving a reading in miles per hour.

However, the controller sees the wheel as not moving and pulses out brake calipers on the wheel. The erratic signal turns on the warning ABS light and the ABS system may go active and pulse your brakes at low speeds. Physically inspect the stator ring to ensure there are no missing teeth, which means no warning light.

Q: Is it safe to drive a car with an ABS light on?

Ans: Yes, it’s safe. The car brakes will still work under normal braking circumstances as usual, even with the ABS light on. However, the brakes will lock up under heavy braking situations, forcing the wheels to skid. Your ABS system is very important during winter when your wheels lock up when you apply heavy braking on ice.

Driving with ABS light on during winter is dangerous, as your vehicle can’t handle heavy braking in emergency situations. The safety feature protects you from accidents and shortens your braking distance, giving you control over the steering.

Q: How much does it cost to fix the ABS system?

Ans: It will cost approximately $200 if you factor in the cost for ABS diagnosis and labor costs. However, the estimate doesn’t include taxes and fees and varies depending on your location.

However, if you have to replace the ABS system, you can pay an additional fee of $200-950 depending on the ABS module part. Many garages will fix your ABS for between $340-1100 in total.

Q: Can Low brake fluid cause ABS light to come on?

Ans: Yes, an ABS light comes on when there is a low brake fluid level in the ABS fluid reservoir. The warning light means you have an abnormally low fluid level. Turn off the engine and restart by turning it on again to see if the warning clears. If not, check if the light is intermittent. If so, it means the brake fluid level is slightly low.

Q: Can worn brake pads cause ABS light to come on?

Q: What can cause ABS to fail?

Ans: ABS rarely malfunction unless the ABD controller is malfunctioning because of one or more sensors or faulty sensor wiring. The most common cause is the contamination of sensors by corrosion, debris, or metal shavings. You will only notice a failure the moment you slam the brakes and notice the wheels are locking up as you drive. 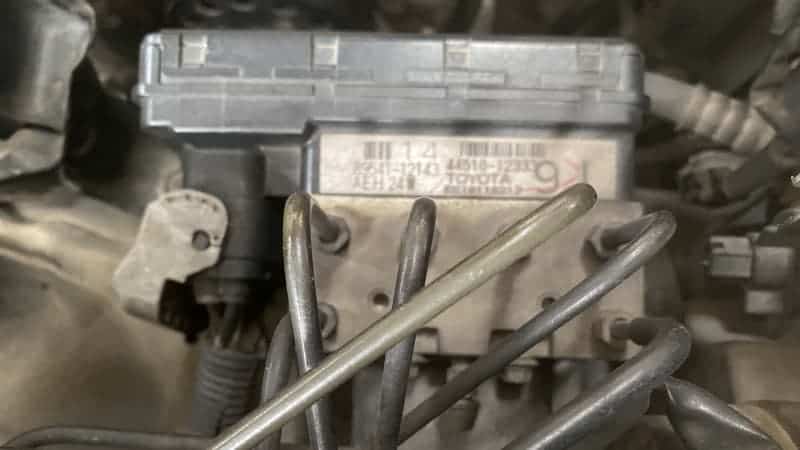 Always be observant when driving and listen to abnormal brake noises that indicate a problem. Observe the ABS module or your dashboard for a warning light that shows performance issues. American-built cars don’t need code clearing. Some Japanese and European-built vehicles may require code clearing using an ABS code reader.

link to Causes and Fixes of Uneven Wear On Brake Pads

Brake pads are a significant braking component in every vehicle, with a disc braking system that creates the friction needed to slow or stop a moving car. They are placed against the brake...

The braking system is one of the most important systems in a vehicle because of its role in ensuring safety. The system comprises of various parts with different functions that synergize to help slow...