In every repairperson’s toolbox, one of the essential and must-have tools is the screwdriver. It is one of the most versatile repair and maintenance instruments with multiple uses.  It has the appearance of a metal rod with a prominent handle, mostly made out of plastic or rubber. There are different types of screwdrivers, and you need to know about them.

The difference usually comes in the structure of the tip, which reflects its distinct use. There are several screwdriver uses, prominent in works such as carpentry, automotive repairs, and general home maintenance.

The size of the screwdriver is another difference that you may take note of, and they come in handy in the engineering field. Here, the longer varieties are the best option when it comes to accessing hard-to-reach areas.

Let us look at the many kinds of these implements that you will come across in the tool section in your hardware.

Most Common Types Of Screwdrivers 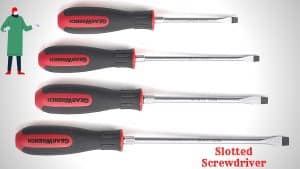 The tip can also work with other screw heads, such as the coin slot, the cross, and other cruciform head types. On some occasions, you may put it into use as a can opener, a scenario common with painters.

The Philips screwdrivers have the same design as the slotted screwdriver. The major difference is the tip, where it takes a crucifix layout with slightly protruding arcs at the right angle of the points.

This implement is useful in various fields, from carpentry to electronics, and features the cam out model. With this model, the tool slips out of the head when the torque exceeds. While you can use the slotted screwdriver for the crosshead screws, the Philips variety is the best for this type.

Frearson screwdrivers are very similar to the Philips type, the main difference being that it has a pointed tip, resulting in perfect right angles on the cross tip. It is unlike Philips, which has an arc joining the cross in the middle.

It is extensively used in marine hardware and appreciated for its non-cam out movement due to excess torque. It is an ideal loosening and tightening equipment for all crucifix screw heads.

The pozidriv type looks like the Philips type, only with four additional lines originating from the tip, which look like ribs. The lines fit perfectly into pozidriv drives, and they have minimal chance of camming out due to excess torque. This feature gives them anti-slip properties.

A downside to this tool is that they require a lengthy manufacturing process, almost twice as long as that of Philips screwdrivers.

A product of Camcar Textron, the Torx screwdrivers has a definitive 6-point star-shaped tip pattern. It is a standard tool in the automotive industry, where Torx screw drives are common. They are ideal screw sets as they resist camming out better than many driver tools, hence safer due to their non-slip characteristic.

There are a variety of these types of screwdrivers, which include the security Torx variety, also known as the security T screwdriver. It features a post in the hub of the head, which prevents access by standard Torx drivers.

There is the external Torx version, where the screw drive resembles a Torx bit, and a Torx socket is its driver. Its functionality is the reverse of the Torx driver.

The Robertson screwdriver is not as popular around the world as it is in its home country of Canada. They are a 1908 invention, the work of P.L Robertson, and take the tag of the first recess drive type driver for production usage.

They find extensive use in the automobile industry, more so in engine repair and maintenance. Ford Motor Company was among the first customers of this screwdriver and used a wide variety of Robertson screws in its auto-engineering works. The screwdriver has a square tip, which has proper traction and won’t slip from the screw during installation.

The U Type Screwdriver

A look into screwdriver types in the UK, and there is a high possibility that you will come across a variety of U-type screwdrivers. They are also called pig-nose or snake-eyes screwdrivers due to the U-shape of their head, which ends in two pointy tips.

Its screw head has two holes where the two tips enter; then, you turn it to loosen or tighten the screws. Their secure nature makes them prevalent in elevators, bus terminals, and railway stations, where they are vital to repair tools.

Many people confuse the hex socket for a spanner as its tip resembles a box spanner. However, it fits the description of the standard screwdriver, only that it has a hexagonal socket instead of a tip. It is used in mechanics repairs and maintenance, and it is ideal for opening nuts on wheels.

It also comes in handy when opening the oil chamber of your engine for an oil change. Its long shaft makes it suitable for accessing hard-to-reach areas on the engine or other automotive parts.

The tri-angle screwdriver is one of the most unique, sporting a triangular tip. It finds its use in electric repair and toy manufacturing to open or tighten triangular screws. It is also referred to as the TA and has a variation, the tri-point 3, which has more rounded edges.

Other Types Of Screwdrivers

The tri-point screwdriver has a Y-shaped tip, which gives it its other name, the Y-type or Y-tip driver. The three edges of the tip are at 120 degrees each, and their corresponding screw drives feature a similar Y-groove on their heads.

They find use in Apple products as well as Nintendo consoles.

This type of screw fastener has a three-pointed tip, with the edges set on a circular head at 120 degrees. The rarity of this type of tool makes the tri-groove screw head the best model for use in security settings.

The 12-spline flange variety of screw opening tools is unique and features 12 –grooves to work on screws with a similar number of splines.

As its name hints, this type of tool features prominently in a jeweler’s accessory kit. They have small tips, which make them suitable for fastening the small screws that are prominent in jewelry works such as in watches.

Magnetic screwdrivers can be of any variety highlighted in this article; the primary difference is that their tip is a magnet. It is an excellent implement that finds its use in electrical repair and jewelry work. It holds onto the small screws and prevents their loss during repairs.

Classification According To The Mode Of Operation

The highlighted screwdriver types base their classification on the length and size of a screwdriver and, most importantly, the configuration of the tip. You can also classify them according to the mode of operation, where you have the standard handheld tool, which has a plastic, wooden, or rubber handle for comfort when in use. It is a must-have tool in many types of repairing works.

There are the electrically operated ones, which include a battery-run driver and a corded and cordless version. They eliminate the use of manual power and are effective for heavy loads of work, the same as time-intensive tasks.

As a repairperson, your toolkit needs a comprehensive set of screwdrivers featuring a variety of tips. It translates to an essence of adaptability, where you can fasten or loosen screw drives of any type. This article shows you the different types of screwdrivers and their uses.

When it comes to uses, you can pull this tool in many settings, such as engine repair, distributor cleaning, and many more. They are also useful implements in home maintenance, mostly in electrical works.