There are several pulleys in front of your car. These pulleys are belt-driven components that function properly through a mechanical force distributed to them by the serpentine belt. When these pulleys or your drive belt goes bad, it generates squeaky noise. If you hear a squealing or whirring noise in front of your car, whether the belt noise goes away when warm or not, it could be so annoying and embarrassing.

There are few reasons while your alternator belt gives whirring or whining noise even after replacement. Without further ado, let’s briefly look at the causes. 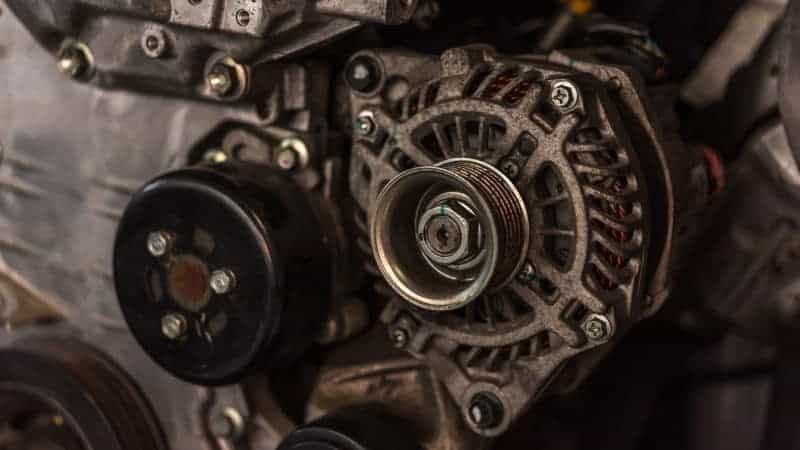 When this tensioner starts to fail, it causes the car belt to squeal when turning, most times the noise will be there when the engine is idling. A failing or bad Hydraulic belt tensioner’s symptoms are rattling noise or leaks on the tensioner and the belt.

This component can fail at any time; however, most of them last longer while some don’t.

If you notice noise after changing your alternator belt, you need to assess your hydraulic belt tensioner (if your car uses this type of tensioner). This type of belt tensioner is common with Toyota Corolla and Toyota matrix.

As the name indicates, it works with the help of a strong spring. The spring helps it to automatically adjust the drive belt while the engine is in motion. If the spring goes bad, it will cause the tensioner to playback and forth. When this happens, it’s either your drive belt starts pulling off at intervals or your car starts giving a squealing noise. This belt tensioner is common with today’s vehicles.

In some cars, there are some rollers that are not holding anything when you remove your fan belt. These rollers are called tensioner bearing or idler pulley. These are mostly seen in vehicles that are driven with only one giant belt. These bearings have a little bearing inside that ensures optimally spinning. If the little bearing fails, it will generate a squealing or whirring noise. This kind of noise is hard to detect where it’s coming from since there are many belt-driven pulleys that make the same noise when they go bad.

To easily detect if the idler pulley is why the new serpentine belt squeals on startup, you have to get a stethoscope to diagnose where the squealing noise comes from. Failing alternator bearing, steering pump, AC compressor bearing, and water pump generate similar noise. If thorough assessment proofs that the noise is coming from your idler pulley, just get new and replace it.

Belt or pulley misalignment is a common issue that causes changed serpentine belts to still squealing. Misalignment means that the grooves on your belt are not aligned with the ones on your pulley. It also tells that you shift the belt a bit in or out in one of the pulleys.

As the serpentine belt’s primary aim is to transmit power from your engine pulley to other belt-driven components, if your belt goes bad or you replaced a low-quality belt that does not have enough strength to carry all the pulleys along, it produces a whirring or squealing noise.

If you notice a squealing noise after replacing your alternator belt, chances are the new belt is either too tight, too loose or one of the outlined causes is in place.

How Do You Fix A Squeaky Alternator Belt

If you’re still reading till this point, you want to know how to diagnose belt squeal and fix it. That said, I’ll explain step by step how to figure out where the squeaky noise is coming from and how to fix it. You’ll know whether the noise is caused by a bad bearing, bad tensioner, bad belt, or pulley misalignment.

Before you start, you’ve to pay clear attention to your engine fan, it can take off your fingers if you’re not careful. In some vehicles the fan starts rotating immediately you turn on your engine while in some newer cars, it doesn’t work this way – either way, stay clear from this device. You’ll need a proper tools box close by as some car’s belt tensioner requires a special tool to pull. 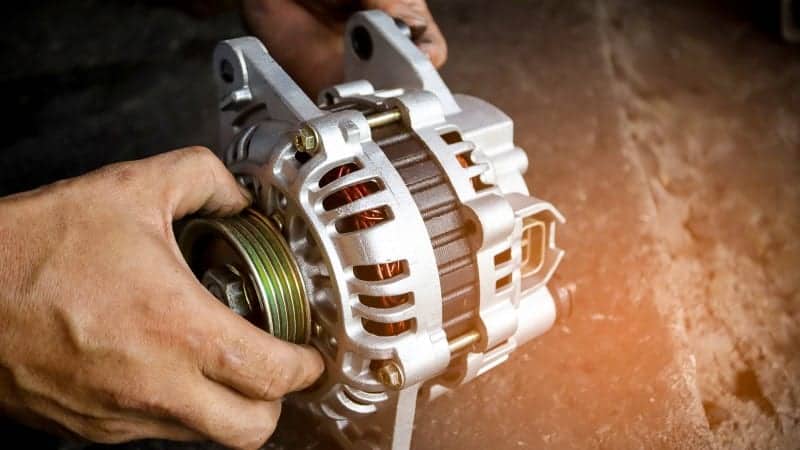 Step 1: clearly assess the cause of the squeaky while your engine is turned off. Depressor pulls up the fan belt and see if your belt is too loose or too tight. If your belt is worn out, the pulley might not be able to give enough pressure on the belt, and that can cause the squeak.

Step 2: turn on your engine, while it’s squealing, spray it with WD40 or water and see if the noise will stop. Ensure you spray this fluid in the pulley grooves. If the noise continues, you have a bad pulley or bad tensioner. If it stops, it indicates that you have a bad belt or pulley misalignment.

Step 3: look at the pulleys and belt tensioner and see if it’s running straight. Examine the pulleys individually to see their rolling condition. You may need an underhood work light to examine the down pulleys.

Step 4: look at the drive belt closely while your engine is idling, check if it’s running straight or running side by side.

Step 5: If after the previous steps above and you’re unable to detect where the noise is coming from, turn off your engine. Remove the belt. You’ll need a quality mechanic tools brand dependant on the type of car you’re working on. Check if there are markings on the belt. Few markings on the belt do not mean that the belt is bad. But if the markings are much, it’s an indication that the belt is long gone and requires replacement.

Step 6: Hold the pulleys firm and play them back and forth, by so doing, you’ll figure out any bad pulley. Some pulleys always play slightly – for instance, the power steering pump pulley will always play whether it’s good or not. However, you’ll be able to determine when it goes bad by how it plays. Replace or repair whatever component that is causing the squealing noise.

Q: What happens if the alternator belt is too loose?

Q: How do I stop my aux belt from squealing?

Do not be confused, an auxiliary belt is the same as a drive belt, alternator belt, and fan belt. The best way to stop a squealing aux belt is to first diagnose the cause of the noise and fix it. A squealing aux bet could be caused by belt misalignment, bad belt, or bad pulleys. Just figure where the noise is coming from and replace or repair it.

Q: Is it bad to drive with a squeaky belt?

Your alternator belt should be given adequate attention, as it helps for optimal functioning of your engine system.

In all, your engine system will not function optimally without your alternator belt. If you notice squealing noise in your car any time, whether your alternator belt squeal after replacement or not, ensure you give it proper attention. The noise has to be stopped.