A functional camshaft sensor keeps tabs on the sequence of opening/closing of these valves and relays the information to the vehicles’ computer or engine control unit (ECU). Armed with this information, the ECM can regulate the timing of the ignition and fuel injection. So by extension, your car’s CMP sensors play a crucial role in the efficiency of your vehicle’s engine and, ultimately, your driving experience.

So what happens when a camshaft sensor goes bad. Well, the situation might lead to potentially bad situations like your vehicle losing power in the middle of the highway. Thankfully, this article will be looking at some of the symptoms of a failed CMP sensor so that you can avoid these kinds of situations.

How does camshaft position sensor work? 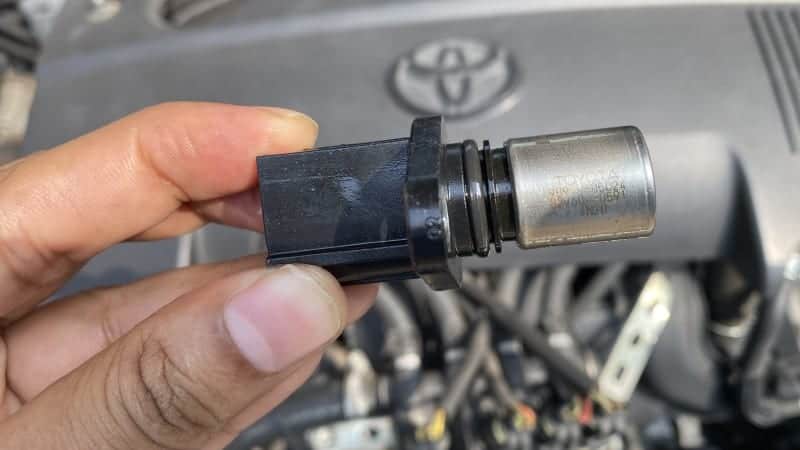 Consequently, the MRE (magnetic resistance element) value changes, and the engine’s ECU voltage is applied to the camshaft position sensor. At the same time, the difference in MRE resistance value is reflected as an alteration in the voltage.

Along the line, the waveforms of the MREs outputs experience varied amplification and take a rectangular waveform that is affected by a circuit located in the sensor. The processed MRE outputs or voltage is relayed to the engine’s ECU.

Your car’s CMP sensor is a component, and like all vehicle’s system components, it will go bad after a while. Here are some of the following symptoms that will occur:

One of the more common symptoms of a failed CMP sensor is that the “Check Engine Light” lights up on your dashboard. That said, this symptom is not restricted to bad CMP sensors as several other issues could cause a “Check Engine” light to go on. We recommend that you run a camshaft position sensor test on your car using an OBD2 scan tool.

Based on the trouble codes you get from the scan, you can then ascertain a problem with the CMP sensor. For instance, if you get a bad crankshaft position sensor, no code, then you might want to get a mechanic to check to determine the issue.

This is often a degenerative symptom that occurs because your car’s CMP sensors have deteriorated badly. The more the CMP sensor weakens, the weaker the signal sent to the car’s engine becomes. After a while, the signal goes off. Starting it becomes difficult, at this point, you’ll be having a hard starting every now and then.

Your car will experience stalling and backfiring/misfiring when the CMP goes bad. Here’s why; The fuel injectors no longer receive signals to send fuel to the engine cylinders at the appropriate times. Once that happens, the engine loses power, and it starts stalling. At this stage, the engine can go into what is known as the “limp” mode. This is a situation where the car locks into a single gear and does not accelerate beyond a certain speed.

The CMP sensor controls the amount of fuel that goes into the car’s engine cylinders. It does this by sending signals to the car’s computer that allows it to fix the timing and duration of the fuel injected into the engine’s cylinders. A failed CMP can no longer perform this task as there is no longer any pulse on your car’s fuel injectors. This situation affects the function of the fuel system and leads to other issues.

The fuel delivery issues caused by a bad CMP sensor will eventually affect how the vehicle accelerates. The reason is that the signals sent from the failing CMP sensors are either wrong or irregular. This affects the timing and amount of fuel injected, which affects the way the throttle responds and ultimately leads to poor acceleration.

Inaccurate readings from a failing CMP sensor can cause excessive fuel to be injected into the engine, adversely affecting the fuel economy. Bad fuel mileage can also occur when a bad camshaft sensor sends wrong signals that affect fuel injection timing and leads to unburned fuel sent to the exhaust.

Excessive fuel is sent to the engine’s cylinders when the CMP sensors send the wrong signals that affect the fuel injector’s timing and duration. More fuel that the exhaust can burn gets to the exhaust. The unburned fuel then leaves the exhaust out of your car’s tailpipes as black smoke, which causes emission problems.

A bad camshaft sensor can cause your car to jerk. This happens due to the wrong amount of fuel injected or the engine losing power while the vehicle is in motion. The jerking motion is the car’s reaction to any of these situations.

So now that you know the symptoms to look out for, is it safe to drive with a bad camshaft sensor? Well, we recommend that you fix the problem as soon as you see any of the symptoms described above. You would be saving yourself from potential engine damage, steep repair costs, and even vehicular accidents. 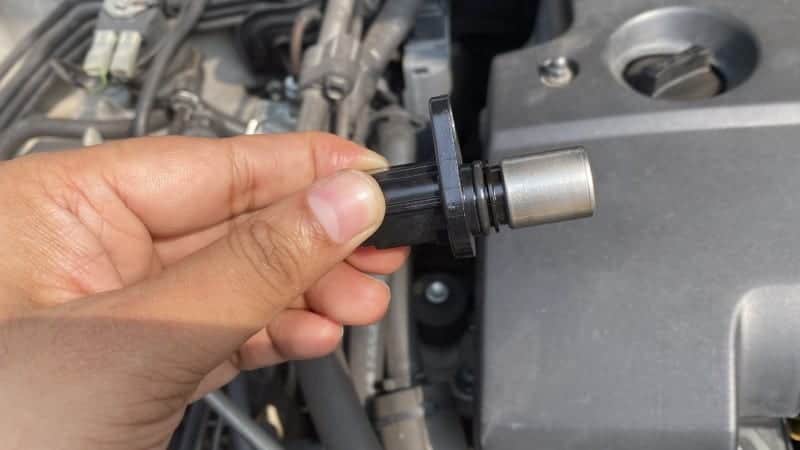 Bad camshaft often makes certain sounds that let you know that something is wrong with it. Most times, a bad camshaft often comes with ticking, tapping, and popping sounds. You will also hear lots of backfiring as the car engine’s cylinders frequently misfire at different speeds.

Q: What is the function of the camshaft position sensor?

The camshaft position sensor allows a car’s computer system or powertrain control module (PCM) to ascertain where the crankshaft drive is at each point in time. It also helps the PCM to identify the position of each of the engine’s cylinders. With this information, the car’s computer can determine the fuel injection and ignition timing and duration so that the combustion process is smooth and the engine runs optimally.

Q: How long does it take to replace camshaft?

The duration for replacing a camshaft depends on certain factors. These are the make/model of the car and where the camshaft is mounted. Camshafts mounted in easily accessible locations take less time to replace, unlike those camshafts on engines with uneasy configurations. That said, replacing a camshaft takes less than 24 hours. It even takes much less on some occasions. It is advisable to get the camshaft replaced by a professional who knows how to reset camshaft position sensor afterward.

Q: What’s the difference between camshaft and crankshaft position sensor?

The camshaft sensor keeps tabs on the movement of the camshaft and ascertains which of the engine’s cylinders is firing at a particular time. This information about the camshaft movement and the cylinders is relayed to the ECU, which uses the data to regulate other engine processes like ignition sequences and fuel injection.

Q: Where is a camshaft sensor located?

The location of the camshaft sensor depends on the make and model of the car because most car manufacturers have different locations for mounting it. The camshaft position sensor can be found in any area: near the engine block, around the car’s lifter valley, at the back of the cylinder head, or a special compartment made for the sensor.

However, for most cars, the camshaft sensor is often mounted close to the top of the engine. You can find it around the intake manifold, on the front or back of the cylinder heads, or around the timing cover. You might want to refer to the owner’s manual to get the right location for the sensor.

Q: How many camshaft sensors are there?

Q: How much does it cost to replace camshaft position sensor

The cost of replacing a camshaft position sensor depends on the make and model of the car if you opt for a DIY or professional mechanic and the location and kind of shop where you get the replacement done. If you opt to go the DIY route, you will be paying between $25 to $100, depending on the car.

Depending on the car and where you get the replacement is done (car dealership and luxury cars cost more), you can expect to pay $70 to $100, which is about the average labor costs. So, by and large, a camshaft sensor replacement can cost you between $25 to $200.Your best bet would be to work with certified mechanics who know what to do after replacing camshaft sensor.

Recognizing the symptoms of a bad camshaft position sensor makes the difference between a car that drives poorly, bad fuel mileage, and possible accidents and a great driving experience. The article describes the symptoms that come with a bad camshaft position sensor. Once you notice any of these symptoms, we recommend getting a professional to look at the situation ASAP. This will help you to ascertain the problem and  take the proper steps towards resolving the issue