Gasoline engines run on fuel. So nothing aside from fuel is supposed to go into their fuel tanks. Even experts recommend this. However, an ad made online for a product called Ecoplus has sparked a reaction among Reddit and Twitter users. According to the ad, putting coke in a gas tank would decrease gas consumption by 55%.

So users across different social media platforms have been asking if it is ok to pour coke into a gas tank. Would it really help save fuel? If not, are there consequences? So in this article, you will learn about what happens when you put coke in gas tank and what to do afterward.

What happens if I put coke in gas tank?

The ad provoking these questions is very misleading. I mean, according to sources, when the ad was clicked, it led to a site selling things different from the item advertised. Ecoplus, the company whose name appeared on the ad, sure does sell products that help reduce fuel consumption, but not with Coca-Cola.

Describing their products, the company said, Ecoplus is a chip tuning box drivers can plug into their car’s OBD II connector to reduce fuel consumption. Who is making that misleading ad and why it’s directing viewers to this ECO plus site is still hard to figure out.

With these said, now, what happens if you put coca cola in gas tank? Putting Coca-Cola in gas tank practically does nothing to improve your car’s performance or save gas. Instead, it will ruin your engine. And here is how it works to destroy your engine.

Coke and gasoline don’t mix because coke is denser than fuel. Hence, it will settle under the fuel tank, acting like dirt and hindering vehicle performance if eventually picked up by the fuel pump. Again, while it is true that the sugar in coke doesn’t dissolve in gasoline, the problem comes when its sugar content gets into the fuel system and stays there.

Just like sand, the sugar particles will clog up the fuel injectors, fuel filters, and even the fuel lines. That will lead to restricting the flow of fuel and reducing engine performance. Should this go on for long, your engine may break down. Aside from the sugar, coke contains many other chemicals that react together with your car system, leading to engine failure. And with time, cause permanent engine damage.

Its reaction to heat

While coke doesn’t dissolve in gas, it can react to heat. Coke contains a high level of sugar prone to melt when exposed to heat and settle on the fuel filter. With the fuel filter clogged, your engine components will not get enough fuel to function as needed.  Should this go on for long, your engine will not only run poorly but may eventually pack up.

Again, when coke enters the fuel system and meets with hot moving engine parts, it forms a thick dark substance like a crystal when dry, clogging the engine components. This engine blockage invariably reduces engine performance and later causes engine damage. Moreover, the pistons, rods, and other moving parts do not do well with crystals around them.

It may not ruin your engine immediately

Coke has a unique composition when cooked and dried out, particularly slimy, sticky compounds. So you should see it on top of the fuel in your tank. Another way to tell if there is coke or any soda in your gas tank is to take a whiff and see if you can detect any sugary/savory smell. However, this method is not too reliable since gas is harsh and can overpower the coke’s smell.

Understand that coke and gasoline should never mix in your gas tank as it will make your engine run poorly or damage it in the long run. So, would zero coke in gas tank hurt my car since it contains less sugar? Whether you have zero or diet coke in gas tank, your engine will still malfunction. Remember, sugar is not the only ingredient used in making Coca-Cola.

With this being said, can you put coke in gas tank? The short answer is yes. You’ll be able to drive your car, especially if you put small quantity. Though putting coke and gasoline at the same time will likely cause immediate damage no matter how little.

But instead of trying to figure out which coke or coke quantity will reduce the consequences of pouring coke in gas tank, why not completely avoid it? Here, the right question to ask should be; should you put coke in gas tank? No, it’s too dangerous for your engine and can cause expensive repairs. You can doesn’t mean you should. 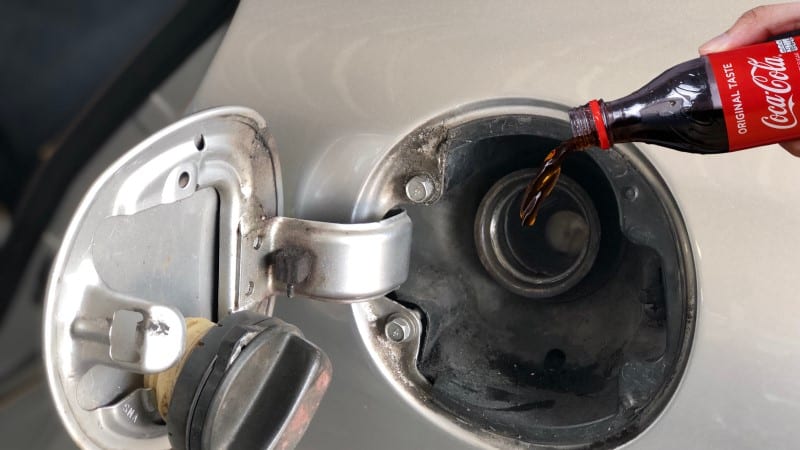 What to do if I put coke in gas tank?

Coke can get into your gas tank through different means. Some people, out of curiosity, may want to try this out even when it’s stated that it’s unsafe. Other times, people can be mischievous and want to hurt you by pouring coke in your gas tank since they know the effect. But however it got there, the most important thing is finding a solution.

So what should I do if I put coke in gas tank? You need to flush the coke out of your gas tank immediately. Leaving it there for long can cause irreversible damage to your gas tank and engine. Because in many cases, even if flushed out after a short time inside, it may still damage your engine.

If you already drove the car before finding out, especially if you didn’t put it yourself, you would need to flush the entire fuel system. Why? Suppose you have driven the car, chances are the sugar content has gotten to the fuel injectors, fuel filters, and fuel lines.

After flushing the fuel system, clean the fuel injectors and replace the fuel filter. Otherwise, when fresh fuel is filled into the gas tank, the clogged fuel filter will not allow adequate fuel apply.

Q: What happens if you put mountain dew in gas tank?

Mountain dew, like other soft drinks, contains sugar. When sugar meets with heat, it melts and finally gets stuck in your fuel filter. This invariably results in clogging, not allowing enough fuel to pass through the filter for enough fuel supply. Because the engine does not get enough fuel to run, it will not run to its optimal capacity.

In other cases, while mountain dew will not dissolve in gasoline, it will get stuck in the fuel system. As a result, the sugar will block the fuel filters and injectors, limiting fuel flow into the engine. Again, when this liquid meets with heat in the engine, it crystallizes. Crystals are not good for the bearings, pistons, and other moving parts.

While your engine may still work, these crystals will cause havoc on these parts, giving you problems the next time you start the car. So if mountain dew or any soda was poured in my gas tank, what should I do? Ensure you flush it out immediately and change the fuel filters to aid proper fuel filtration.

Q: What would putting candy in a gas tank do?

Candy is a combination of solid fat and sugar. Sugar doesn’t dissolve in gasoline, so it would just sit underneath your gas tank. And probably act exactly like dirt would if inside your gas tank. And may likely cause issues if picked up by the fuel pump. The candy fat may likely act the same way.

However, if the candy in the gas tank gets heated when driving your car, it can melt and gum to the fuel filter, causing a blockage. With your fuel filter clogged, the engine wouldn’t get enough fuel needed to run. Whether it melts or not, it won’t be of any good to your engine or the performance of your car.

Q: What happens if someone puts rock in your gas tank?

The rock will start moving whenever you drive or stop. The second issue will be the issue of clogging. If the rocks are dirty when put in the tank, the gas will wash off dirt from the stone, which will eventually end up in your fuel filter and even clog the fuel pump.

A clogged fuel pump and filter will restrict the fuel entering the engine, leading to poor engine performance. However, if your vehicle tank features a rollover valve, then the valve may likely trap some of the rock.

Hence, it may likely not make it to the fuel tank. If they, however, entered the tank, flushing the tank and replacing the fuel filter would be the ideal thing to do.

Q: What happens if someone puts stuff in your gas tank?

What happens if someone puts stuff in your gas tank depends on the content that was added. But usually, most will cause your engine to run poorly or even cause engine damage. In some cases, your car won’t run at all. So what kind of stuff can people put in their engine?

Aside from the ad, which showed that putting coke in gas tank saves gas, there are other misleading ads online. All of which are dangerous to your engine. There were other ads showing where Fanta, Colgate toothpaste, dishwasher tablet, and even ketchup were either added or held close to the gas tank. With all stating, they can help lower fuel consumption, though written in German.

You should see a collection of these misleading ads about putting coke in gas tank to save fuel on Moschus, a German YouTube channel. The German Youtuber analyzed the trend, warning users not to try them. A malicious person who knows these things are dangerous may try using them. Some can also pour engine oil, groundnut oil, and olive oil into your gas tank.

Q: What’s the worse thing to pour in a gas tank?

With air, your car will stop running immediately. Others include water, bleach, hydrogen peroxide, antifreeze, salt, brake fluid, sugar, soda, toothpaste, wrong fuel, honey, urine, etc. While they may not harm other vehicle components, they can ruin your engine. For coke in a gas tank, the car will only stop if its sugar has clogged the fuel filter.

So, you may want to check if there is coke in your gas tank to avoid costly repairs.

When coke is heated and dries up, it leaves a slimy substance in your gas tank, different from your gas look. You could also detect coke in gas tank by taking a sniff. You should perceive a sugary smell if there is coke. However, because gas is harsh, it may cover the smell. Hence, not very reliable in detecting coke in gas.