That brings us to the question, do Tesla use gas, and do Tesla use oil? While we know that Tesla is an electric vehicle, some people are still confused about whether they use gas or not. So, in the following paragraphs, we’ll see whether Tesla uses gas or not and explain what makes Tesla different from other vehicles.

Do teslas use gas?

With hybrid technology, the vehicle runs on electricity as far as there is power to run the electric motor. But once the battery runs out of power, the vehicle switches to the internal combustion engine.

Teslas do not work this way. Instead, they use only electricity. Teslas have two or four electric motors that power the car, depending on your Tesla model. If the battery runs out of power, you have no option but to call a flatbed truck to tow the vehicle to a charging station.

However, you must have ignored several warnings before getting to this point. Tesla tries to prevent this from happening. It does this by;

Read Also: Do Teslas Have Transmissions? Clear If You Have the Misconception

What makes Tesla different from other vehicles?

Here are some factors that make Teslas stand out from other vehicles.

Plus, Teslas uses software to make its battery efficient. They use many tiny battery cells, unlike their competitors. The small battery cells make it high-powered and efficient. You don’t need to replace the entire battery when a single cell dies.

Similar to autonomous cars, Tesla cars have autopilot features. With Autopilot features, Tesla cars can brake, steer, and accelerate automatically within a specific lane. Autopilot is a driver assistance feature that improves convenience on the wheel and enhances overall safety. In addition, each Tesla vehicle has an onboard computer, 12 ultrasonic sensors, and 8 external cameras to add an extra security layer to the vehicle.

The sentry mode keeps your car security active even when parked. Of course, I don’t mean the usual security on all modern cars. Instead, the sentry mode allows you to monitor your car anywhere. For instance, If you park your car in Alaska and travel out of the country and someone dents your car, the external cameras will capture it and notify you via the Tesla mobile app.

Teslas that have plaid mode have similar speed status to Bugatti and Lamborghini. Teslas with the plaid mode have three electric motors and high-powered batteries that can accelerate the vehicle from 0-60 miles per hour in two seconds, backed by a 1,020 horsepower engine.

Tesla cars have mobile apps that can allow you to control the car from any part of the country. With the app, you turn on the air conditioning system, heat, unlock and lock the doors, and check the charging status if you’re charging it.

We mentioned earlier that one of the common reasons electric car lovers ask do Tesla have gas options is because of electric vehicle power issues. So aside from equipping their cars with high-powered and efficient batteries, Teslas has made an innovative move of installing Tesla superchargers to kill this power anxiety.

I can’t imagine driving alone without playing music. Music makes your ride comfortable and pleasant, and Tesla understands this. So Tesla adds caraoke into its software, allowing users to play music and have the song lyrics displayed on the screen without interfering with system notifications. The caraoke plays songs in different languages. 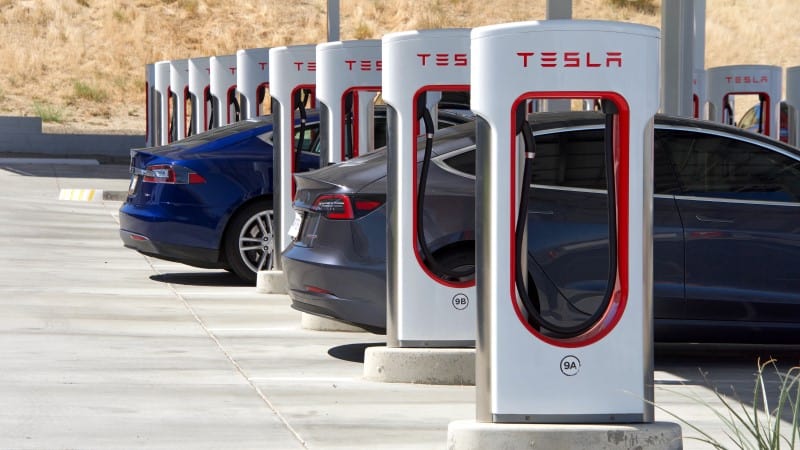 Q: Do Teslas have a gas tank?

This is like asking, do Teslas use gas too? Tesla cars run on 100% electricity, meaning they don’t have gas tanks. Unlike internal combustion engines that run on gasoline and diesel, Teslas get their power source from electric motors, which derives electricity from a lithium-ion electric battery pack. These electric motors are lighter and more efficient than internal combustion engines.

As reiterated, Teslas have efficient high-power batteries. All Tesla cars can stay charged for 267 miles. However, this depends on your driving style and the size of your tesla battery. Currently, Tesla has the longest range of 375 miles per single full charge.

If you’re wondering how do you charge a tesla? It is pretty straightforward. Grab the appropriate adapter and connect it into your vehicle charging port, and then connect the adapter into the station’s charging connector.

Q: How much does a Tesla raise electric bill?

The average charging price per mile is 4.56 cents across all Tesla products. Therefore, if you don’t use superchargers but charge your Tesla at home, you’ll have around a $50 electric bill raise a month. Although, Teslanomics stated that the average cost of charging a Tesla per month is $49. Either way, Tesla is more cost-effective than gasoline and diesel-powered vehicles.

Q: Is charging your Tesla free?

In the early days, Tesla offered free lifetime charging and even made the free charging transferable, but as the company grew, they cut off free charging as of May 2020. So at the moment, you have to pay for charging your Tesla and other electric vehicles. However, you can get a free charge at some hotels and motels with Tesla destination chargers, which have indicated that it’s free.

We’ve explained that all Teslas are fully electricity-powered cars and do not have internal combustion engines. They use electric motors and battery packs instead of internal combustion engines. Therefore, you’ll no longer ask, can you put gas in a Tesla, or do Teslas use gas? All Tesla vehicles are powered by electricity, and the company has no intention whatsoever to produce hybrid or conventional vehicles.