Over 26,000 catalytic converters have been stolen so far in 2022 in the U.S. According to Been Verified, the number of cat converters theft moved from about 14,300 in 2020 to almost a whopping 65,400 in 2021. Unfortunately, Washington has witnessed the highest theft rate.

Why the alarming rate of missing or stolen catalytic converters? The component is built with amazingly expensive materials worth thousands of dollars on the black market. Could there be gold in a cat-con? How much gold is in a catalytic converter?

This article unveils the vital information you need to know about the converter’s worth and whether there is gold among the component’s materials, as well as the amount. Grab a seat and a cup of coffee. 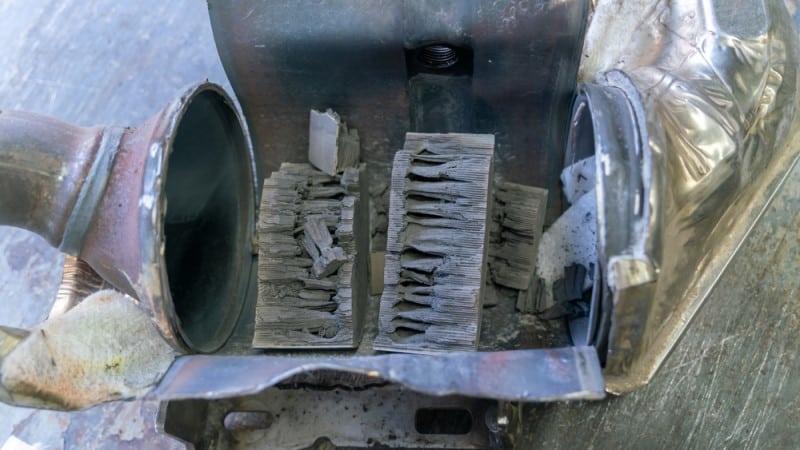 How Much Gold Is In A Catalytic Converter?

Typically, gold is not currently used in a vehicle’s catalytic converter, if you’re asking, “Does a catalytic converter have gold in it?” But there are other precious metals in it, and they include platinum, palladium, and rhodium; these metals are quite expensive due to their value in the industrial and commercial sectors.

However, before the three main precious metals finally took over, gold and platinum were plaited at the core of the catalytic converter, which was made of aluminum or zinc. Over the years, platinum, rhodium, and palladium were seen to be superior in effect to gold.

Therefore, the three metals above became more popular in the cat converters as the most effective catalysts that help detoxify the pollutants in the gaseous emissions of vehicles before they are released into the atmosphere.

The metals have attracted more thieves in recent times than when they were first used in the catalytic converter. This is because professionals have revealed that the catalytic converter does not just contain metals; these precious metals can be recovered and sold to users in the industrial and commercial sectors for recycling purposes.

In other words, if the metals in a catalytic converter had no industrial, commercial, or economic values, the cat converter wouldn’t be a target for thieves.

Therefore, since it is no longer news that the catalytic converter is indeed valuable because of the metals, you must ensure to protect your car from invaders, especially at night.

What Is The Reason For Use Gold In A Catalytic Converter?

The actual reason why gold was used in the catalytic converter was the exact reason for the presence of platinum, rhodium, and palladium in the component today.

Gold acted as a catalyst that helped to neutralize the toxic substances (pollutants) like carbon monoxide, nitrogen oxides, and hydrocarbons in a car’s exhaust emission before the gas was finally emitted into the atmosphere.

The formula was precisely similar to the process of the roles that platinum, rhodium, and palladium play in the catalytic converter. Typically, when the gaseous pollutants come in contact with the hot catalysts in the converter, they are subjected to a chemical reaction.

The chemical reaction breaks the toxic molecules (carbon monoxide, nitrogen oxides, and hydrocarbons) into less hazardous molecules like carbon dioxide and water. Then, the emission is released into the air via the car’s exhaust pipes.

However, it is difficult to find gold among the catalysts in a cat converter these days, as platinum, palladium, and rhodium have taken over. However, whether gold or any of the current precious metals, these catalysts’ value has not ceased to attract catalytic converter vandals.

Therefore, protecting the catalytic converter by ensuring safety measures around a car is the solution to deter criminals from vandalizing your vehicle’s cat converter.

The metals in a converter are useful to the perpetrators; a car owner can also derive some economic value from the component when any of the metals are recovered from a used converter. However, understanding how to extract gold from a catalytic converter is crucial.

How To Recover Gold From Catalytic Converters

Firstly, the mixture is derived by combining nitric acid and hydrochloric acid. This chemical solution has the capacity to dissolve gold. Once the honeycomb-like structure of the converter is grounded with a rod mill, the byproduct is placed in the aqua regia mixture.

Then, it is precipitated out with ferrous sulfide or copperas to retrieve the gold in the catalytic converter. However, this extraction process can be very risky; hence it is strictly for designated professionals in the industry.

How Much Is The Gold Worth In A Catalytic Converter?

Meanwhile, rhodium commands more worth and is valued at $14,450 per ounce, while platinum and palladium are valued at $889 per ounce and $2,226 per ounce, respectively. However, these are prices revealed in metal exchange platforms in 2022, which are subject to fluctuations.

How Much Precious Metals Do You Get Out Of A Catalytic Converter?

Notwithstanding, the smallest catalytic converter is still a target for cat converter thieves. These folks understand the industrial and commercial usefulness of the metals in the converters, hence their resilience in attempting to outsmart a careless car owner.

Knowing the worth of the components in your car helps you appreciate it better. In fact, cars are not just expensive because of the brands, make, or model. The extent of valuables used in their components also matters.

If you were contemplating how much gold is in a catalytic converter, this article has unveiled the truth about this metal in a cat-con. Although it was once available in the component, manufacturers now focus on using platinum, palladium, and rhodium as catalysts in recent cat converters.