Have you ever forgotten your car key inside the car before? Were you about to head out to a meeting and you noticed your car battery was dead? This could be frustrating, unnerving, and troubling.

In worst cases, your car hood could get stuck in the process of trying to fix the problem.

However, when you finally open the hood from outside; do well to find a solution to the root cause of the problem. It could be fixing a new battery or keeping one spare. In this article, we’ll discuss the best practices on how to open a car hood from outside.

How to Open a Car Hood From Outside 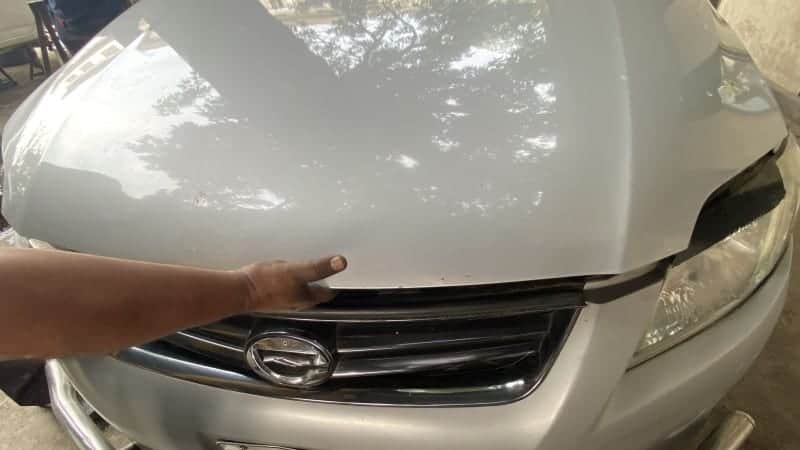 You don’t have to beat yourself around just because your battery is dead or you’re locked out of your car. There are ways to fix the problem. Mainly, there are two sets of tools you’ll need for this. The first is a spanner and copper wire, while the second is a screwdriver.

Get a strong copper wire and a spanner, you’ll need it for the process. You may choose to get an underhood work light as well since the hooded area will be dark

Move to the front of the hood. Insert the copper wire into the spring holding the hood latch.

Use the spanner to drag the latch to the left. The hood will pop open immediately.

If you don’t have the tools referred to above, you could use a screwdriver. Just use it to directly drag down the latch to open the hood. It’s simply an easy process. Here’s a visual presentation on how to open a vehicle hood from the outside.

Q: Can You Pop a Car Hood From Outside?

Yes. But, this may differ based on the model of the car. Older models of vehicles have their release latch in front, under the lever while the newer models have theirs somewhere inside the car cabin.

Therefore, to open the hood, you’ll have to first locate the latch and pull it with a screwdriver or spanner.

Take note that opening the hood of your car without following the proper steps can damage the hood or latch, and cause an increase in the mechanic charge for repairs.

Q: How Do You Open a Hood With a Broken Cable?

If you’re thinking of how to open the hood of a car with a broken cable, you shouldn’t get scared. It’s normal for your car hood cable to break as a result of prolonged use or corrosion.

Interestingly, you can still open your hood with the broken cable. Here are the steps to follow:

Hold the release latch with pliers and pull to see if it’ll open the hood.

If it doesn’t open, locate the slight indent behind the front grill on of your car. You’ll find a spring lever in the indent, beneath the front grill.

Use a giant flat screwdriver to hold the release cables to trigger them by either pushing or pulling the loop at the end of the cables to release the hood. You can even go ahead and search for how to open the hood with a screwdriver. For a visual clarification, watch this video.

Q: How to Open the Hood of Your Lexus From Outside?

Possibly, your car battery may have died, and you’re looking for how to open a car hood with a dead battery. Worry no more! These steps will guide you.

You’ll have to first park your car on a leveled surface. Then, turn off the ignition and apply the emergency brakes.

Move to the front of the car and pull the hatch with a screwdriver or spanner until it unlocks.

Then, push the car hood open and support it with the bonnet hanger. If your car is a Ford Explorer, check out how to open a Ford Explorer hood from outside on the above video.

Q: How Do You Open a Frozen Hood?

Sometimes all efforts to open the hood could be futile because it is stuck or frozen. When the weather is cold, it could cause the hood not to open because of condensation.

Here’s how to open the hood of a car:

You’ll need first to warm up the engine to warm the frozen parts of the hood.

Try opening the hood once the car is warm by pulling the release latch.

In addition, it is advisable to reach out to the mechanic to inspect the latch and replace or lubricate it, if need be.

Q: How Do You Manually Open a Car Hood?

If the release latch inside the vehicle isn’t responding, here’s how to open a car hood without release:

Go outside the car with a bent hook. It could be a long welding rod. Locate the cable that connects to the hood latch inside the car. Pull off the spring with the welding or any bent hook. Ply up the hood mechanism.

Go ahead and slightly raise the hood. This should cause the hood to pop up a bit. Slide your hand under the hood and pull the latch the usual way.

This short guide will answer your query on how to open a car bonnet without a key on top of educating you successfully open a car hood from outside. For sure, it is not as stressful as you have thought before going through this article.

However, we’ve made the process easy for you by providing you with the right generic steps on how to open a car hood from the outside.  It will guide you through the whole process till you finally fix the hood problem.