During engine reassembly or building, parts of the engine are cleaned with solvents that remove all lubrication. When assembling them, the rough surfaces can be stubborn. It takes some seconds for the engine oil to get dispersed on the first startup. That is why you need the best engine assembly lube. When the engine is moving, it causes the metal to metal contact, which leads to overheating. This can cause bearing to wear almost immediately.

Some other areas in the engine like rocker arms and push rod tips do not get lubricants until the engine runs for some seconds and establishes oil spray. You need the best engine assembly lube to prevent metal-to-metal contact before the engine oil gets to those parts. Assembly lube is thick made to stick oil on metal surfaces to put parts together and also protect post assembly.

Permatex 81950 is an ultra-slick engine assembly lubes which sticks on metal components of the engine to prevent them from galling and scuffing when running for the first time. Before you start rebuilt or a new engine, it is essential to lubricate the metal surfaces properly.

Permatex lube is made following OEM performance specifications. It is among the best engine assembly lube for long-term storage.  You can use the lube as a protectant, dressings, and lubricant. It is also ideal to use in heavy-duty applications. Permatex engine assembly lube is reliable for problem-solving and also prolongs the life of your equipment.

Permatex 81950 Ultra Slick Engine Assembly Lube is a perfect choice for applying engine bearings, guides, valves, lifters, camshafts, and rocker shaft assemblies. This lubricant can also be used for a specific or special mission. Apply a generous coating on the lifter, camshaft, bearings, and timing components while assembling the engine.

Sta-Lube was formulated in 1933. In 1995 CRC innovated it further using additives to make a high-performing motor. These days the CRC is known for supplying high-quality additives, hand cleaners, service fluids and oils, gear oils, greases, and lubrication equipment. Their Sta-Lube 3331engine assembly lube is not any different.

Sta-Lube engine assembly lube has gone through rigorous testing and meets the highest quality standards as well as OE specifications. This black-colored lube is impressively tacky and thick. It is one of the most preferred engine assembly lube by professionals. It is an ideal assembly lube for main bearings, camshaft bearings, pistons, and timing gears among others. Always remember to shake the lube well before you use it.

Red Line 80319 is among the best engine assembly lube for engine metal surfaces. It is a perfect choice for people who prefer a thinner assembly lube. It is ideal for use in rod and main bearings, timing chains, and valve train parts. This lube has a more pinkish color. It is not as thick, but even when it runs, it leaves a fine slick film.

Red Line 80319 liquid assembly lube is soluble in oil. It is used when reassembling engine parts to give a smooth startup. It is high-performance lubrication, which mechanics should consider during the engine rebuild.

TORCO A550055JE engine assembly lube features a high degree of protection since it contains anti-shock, anti-friction, and anti-wear chemistries. It has outstanding adhesion properties. When used on metal surfaces, it drips and runs slowly, leaving them with a protective film. In engines, it is advisable to use the TORCO assembly lube as a pre-lube for main bearings, wrist pins, train parts, and rod bearing, among others.

This engine assembly lube from TORCO can also be used as a pre-lube in driveline applications. In this case, you can apply the lube on ball bearings, roller bearings, bushings, and gears. TORCO A550055JE MPZ lube is as well useful on transaxles marine v-drives, transfer cases, rear axles, and in both automatic and manual transmissions. The lube protects the rear axles, transmissions, and assembled engines from corrosion and rust during shipment and storage in vehicle assembly plants.

Lucas Oil LUC10153 is a high-performance engine assembly lube made for technicians and mechanics. The semi-synthetic assembly lube is used as a pre-lube to valve trains, lifters, cams, and bearings. This lube contains moly, zinc, and various high-pressure additives. This make helps it to provide maximum protection to the engine during a break-in.

Lucas assembly lube is easy to use and super slick. The lube prevents scuffing, galling, and seizing and gets rid of dry starts. You can use it on interior moving components of the engine like a crank and connecting rods. The lube will keep these parts lubricated until you run the engine. It is also ideal to use the lube on motorcycle engine builds. 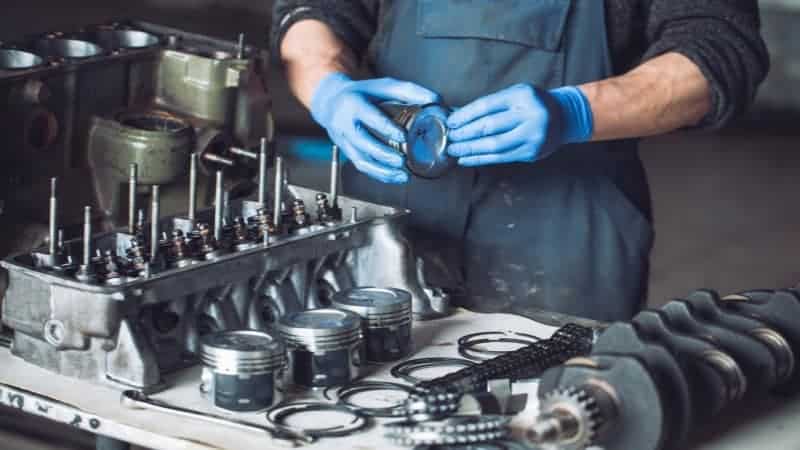 Q. Where Do You Put The Engine Assembly Lube?

Engine assembly lube should be used on all high load and high friction surfaces such as the lifters, pushrods, camshaft valves cam, rod, and main bearings. The lubes are quite crucial during the rebuild or assembly of engine parts. Basically, apply engine assembly lube on every part that will need engine oil when you run the engine. Engine oil needs the engine to run for some seconds to get to these parts. The lube prevents these parts from running dry in the initial startup.

Yes, engine assembly lube is very important during the assembly or rebuild of an engine. The engine oil lubricates the different components of the engine. However, after assembly, it takes some seconds for the engine oil to get to some parts. This means that the metal parts will run dry and rub against each other, causing friction, which eventually leads to wear.

Assembly lube is essential since it is applied to the components of the engine like camshaft bearings, timing gears, and main bearings, among others during assembly. The lube keeps the parts lubricated before the engine oil gets to these parts. Assembly lubes also protect engine metal components from corrosion and rust. For these reasons, it is very necessary to use engine assembly lube when assembling or rebuilding the engine.

Q. Can I use Grease Instead of Assembly Lube?

You can use grease in place of lube, but it is not recommendable. The grease, however, should not break down at the engine operating temperatures. It also shouldn’t interfere with the normal oiling of the vehicle. The grease should be thick enough to stay in place before the engine oil takes over.

Q. How Do You Lube a Cylinder?

When applying lube on a cylinder, start by cleaning the piston by wiping off the earlier used lubricant from the piston. This is after raising its seat to the maximum. If the cylinder has a bellow or a cover, access the piston by pushing the cover-up. The piston will have some exposed parts, and that is where you apply the assembly lube. After that, distribute the lube to other parts of the piston by lowering, raising, and rotating the seat. Go through this video to see how it is done:

Q. How Do You Lube a Camshaft?

The process of lubricating the camshaft will depend on where it is located. Camshafts that are attached to the cylinder head may get lubricants through and end feed. You can also lubricate it directly via passages in the main gallery. The oil supply in this camshaft is restricted to prevent increased oil consumption from overflowing to the valve mechanism. Camshafts found in the engine blocks are lubricated via the main bearings. There are some passages in the engine blocks where the lube passes through to get to the cam bearings. The lube passes through the main gallery and main bearings.

When assembling or rebuilding an engine, you put metal against metal. These metals need to be lubricated before the initial start. Engine oil takes a while to get to the metals, and that is why you need the best engine assembly lube. The lube reduces friction and overheating during the initial startup. When purchasing an assembly lube, check its thickness carefully.

The lube should be ideal for cylinder sleeves, piston pins, valve guide bearings, and other metal parts of the engine. Also, ensure that the assembly lube you buy can dissolve in engine oil. The engine assembly lubes discussed above is of high quality from top brands. Use the lubes to protect the engine components from corrosion and rust.

link to Bubbles In Transmission Fluid: Everything you need to know

Aside from lubricating purposes, fluids (ATF's and CVTs) play other essential roles in automatic and continuously variable transmission. ATF in an automatic transmission, for example, lubricates the...

Continue Reading
link to Miller Vs. Lincoln Welder: All You Need to Know

Welding is an art to many, a career to many more. The Miller and Lincoln welders are top-of-the-line welding machines. However, there has been a debate on which is better between Miller vs....