The Spoon Engine is something you have probably heard about if you are a fan of car racing movies. In such films, it is an added advantage to cars that make them go faster than the competition.

Spoon Engines do not just exist in movies. They are real-time technologies that are found in certain cars. This article sheds more light on this automotive technology and explains what it is and how it works. You’d also get some answers to some common questions about the spoon engine.

What Are The Spoon Engines?

If you visit many automotive sites about cars, you would have come across a spoon engine meme or two. So it is only fitting that we delve into a brief history about them.

Spoon engines are products of a Japanese automotive tuning firm known as Spoon Sports. It is essentially an automotive enhancement invented by Tatsuru Ichishima, a former Honda test driver and race car driver. Ichisima’s idea was simple; build an economical car that was extremely fast and fun to drive.

So he remodeled a third-generation Honda Civic hatchback by taking apart its 1.6 Liter ZC engine and repurposing it to 230 horsepower. He soon started racing these custom Spoon Civics in the Japanese Touring Car Championship from around 1988.

Ichishima’s exploits impressed Honda so much that they brokered a deal with him, and by 1989, he started the Spoon Sports Company.

So what are Spoon Engines?

Spoon engines are engines that have been modified for circuit racing using specialized Spoon parts. These parts are made with extremely low margins of error because of the precision needed in such races.

A Spoon Engine is built by refining and balancing the following parts:

The result is a car with an 11,000 RPM rev limit that can comfortably compete with most racing car engines as far as power and speed go.

The aim of the refining and balancing process used in making Spoon Engines is to improve the capability of the components while eliminating any weaknesses in the components.

So, in essence, issues like loss of power from inefficiency, power delivery, and engine and throttle response which plague “regular” cars, are improved after the tuning process has been completed. That way, the engine revs faster, high RPMs are better managed, the engine longevity is increased, and the engine performance is ultimately improved. 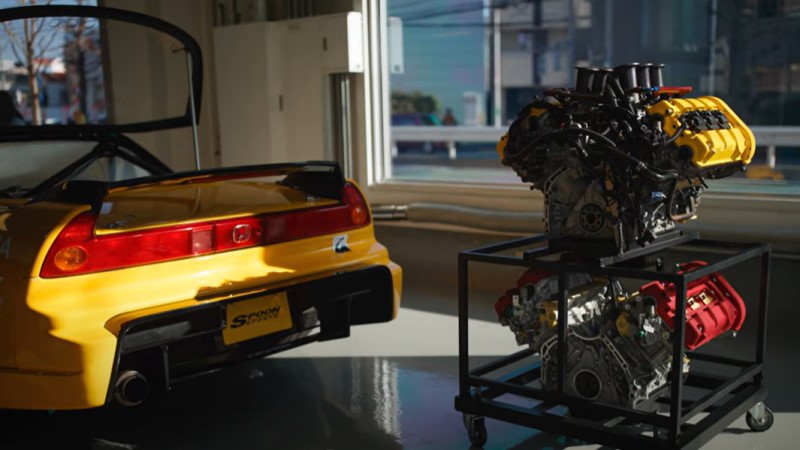 What Cars Have Spoon Engines?

Spoon engines are designed to move extremely fast. However, such high speeds put the engine under increased strain primarily because of the internal forces and a large amount of heat generated.

That is why Spoon Engines are not found on all cars. Due to the Honda/Spoon Sports partnership, the Honda Spoon engine can only be fitted on Honda cars. Some of the Honda cars that you’d find Spoon engines on are:

Q: Why is it called a Spoon engine?

The Spoon engine gets its name from the Spoon Sports Company, which manufactures the specialized motor components used to modify it. Spoon engines are hand-made by Spoon teams that produce Spoon-approved and Spoon-certified engines. Both reasons are why only engines built at the Spoon Sports complex in Tokyo are recognized as Spoon engines.

Q: Is a Spoon engine worth it?

It all depends on what you are looking for. Spoon engines are mostly assembled for racing. They are designed to provide a significant power volume without sacrificing the engine longevity or dependability needed for racing.

So a Spoon engine might not be worth it for you if you are not a car racer. It would be a waste of the engine’s potential to use it for “regular” driving.

Q: Can you turbo a spoon Engine?

Yes. But that could be overkill because it might not always boost Spoon engine power. Spoon engines are designed for high-speed performance and reliability. So getting a turbo done on a Spoon engine will lead to excessively high compression, which increases the engine’s risk of detonating.

Q: Can I build a spoon engine?

No. Here’s the thing, you could buy any of the specialized Spoon motor parts when looking to modify or fit an engine to your specifications. However, for an engine to be considered a Spoon engine, it must be assembled at the Spoon Sports factory in Japan.

So technically, you can’t build a Spoon engine even if you bought and used Spoon components in building an engine. Getting a spoon engine swap might be a great alternative to building one yourself.

Q: Why are spoon parts so expensive?

There are a few reasons for this. Firstly, the precision required for Spoon parts is so high that producing them costs a lot of money. We are talking about motor parts built to have a precision of +/- 0.01 grams. The nuts and bolts are not left out either, as they need to be torqued to an accuracy of +/- 1 Nm.

The second reason is that these parts are only made and shipped from Japan. Shipping costs increase already high costs of the motor elements.

Q: What sports use spoons?

Spoon motors/engines are primarily used for circuit racing. They are built to provide the power, longevity, and reliability needed for racing for long periods.

The Spoon engine is the stuff of movies. There is hardly a car racing flick that does not reference a Spoon engine in one way or another. You can get one for your car if you have the funds and the passion for cars with powerful engines.

You can also get yourself a “diet” Spoon engine if you are on a budget, though. It is called a Spoon crate engine, and it could also serve your need for speed.