Head porting can result in very impressive power gain in a vehicle, especially when performed excellently by a skilled auto mechanic.

Cylinder heads like 243 heads have the ability to get more air and fuel into a vehicle’s cylinder, combust it efficiently and exhaust it as smooth/fast as possible.

This article unveils critical information about the 243 cylinder heads and why they seem to be one of the best heads with the capacity to boost power output. Take a moment to digest every section of this article in the next few minutes.

The process of casting cylinder heads with aluminum alloy or iron has a tendency to result in a cast flash. This defect occurs due to metal leakage from joints in the cast and contact established between the material and the base of the mold when it’s still in a molten state.

The current state of the cylinder head affects fluid flow through the side of the head into the cylinder using the valve throat as a passage.

In order to have an efficient fluid flow that produces maximum performance, you will need to machine the cylinder head to minimize the number of rough patches and small restrictions that could affect the fluid flow into the respective cylinder.

When the fluid flow turbulence is reduced, it will result in a smoother intake and quicker exhausting, thereby increasing power output. This is why the 243 heads porting is important.

243 cylinder heads have cathedral-shaped intake ports and a D-shaped exhaust, which helps to enhance air and fuel intake, smooth combustion, and quicker exhausting. This process triggers improved horsepower for high performance and efficiency.

The following are features and specifications of 243 heads that distinguish them from other cylinder heads. 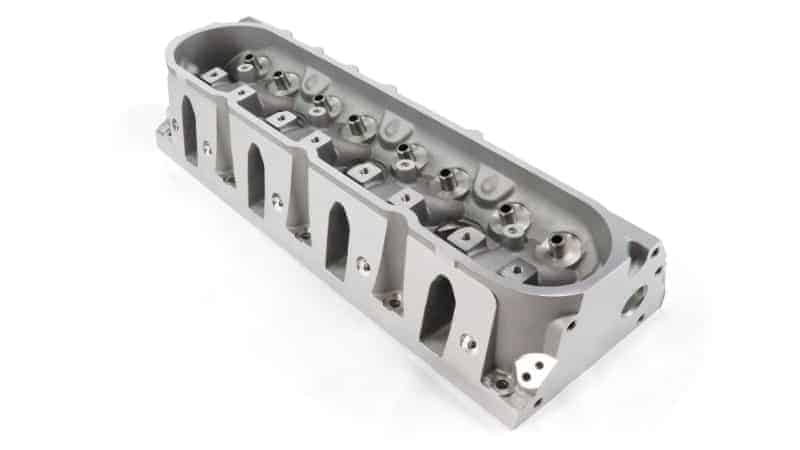 The fuel tank may develop sediments capable of clogging the fuel filter over time. In order to overcome this challenge, it would be best to clean the fuel system regularly with the Al Delco fuel cleaning system.

Of course, the 243 head is designed with a better casting which has a smaller chamber for more compression. They flow better and have the capacity to deliver more than 5% horsepower on flow alone.

If you desire to perform a porting on your vehicle’s cylinder head, getting new 243 heads is perfect for the porting job. When the 243 heads are coupled with a powerful can and an excellent valve lift, the result is improved power output. If you’re looking for 243 heads for sale, kindly check a dealership near you or buy online.

If you are asking, “What did 243 heads come on?” The 243 heads were typically found in GM’s C5 Corvette; however, it was later ported and now found on engines like truck specs LQ4 and LQ9.

The LS6 was designed to work with the Corvette’s titanium exhaust system in order to deliver extra power. It also had an incredible camshaft, stronger valve train, and other sophisticated enhancements that made it one of the best vehicle engines.

A pair of 243 heads add up to about 20 horsepower (hp) on the GM’s bolt-on LS1 or LS6 engine. Since the engine already features an aggressive camshaft, it might experience a little bit more horsepower.

If you desire to modify your vehicle’s internal combustion engine intake and exhaust ports, swapping to 243 heads alone can be a great enhancement. With this, you can enjoy improved airflow, which in turn adds up more horsepower.

Of course, a porting job coupled with a high-performance cam and an excellent valve lift can trigger an incredible potential for improved power output.

The 243 heads come with 64.5cc chambers, while the 706 heads feature 61.5 cc chambers. Although the 243 heads appear to be more excellent than the 706 heads, it may not be a nice combo with a tiny bore engine due to its larger intake valve.

GM 243 heads are General Motor’s 3rd generation cylinder heads designed for V8 trucks, SUVs, vans, and performance applications. The 243 heads are often called LS6 heads because they were found on the 2001 – 2006 LS6 engines.

The GM stock 243 heads are designed to boost flow by up to 32.2 cfm and 28.5 cfm on the intake and exhaust sides, respectively. The 243 heads release about 5% more power on their flow alone.

The power enhancement is because of its hollow valve stem, which delivers a better RPM potential, standing up to more turbo or supercharger applications. 243 heads were improved with more flow and a little bit more compression than LS1 heads.

The 243 heads are unique for the top-notch performance and awesome feeling they bring to the table. The satisfaction you derive from using 243 heads cannot be matched.

The 243 heads are designed to deliver extra boost and increased performance due to the more excellent casting and better flow, incredible design, and relatively nice marginal gain compared with its price.

With a flow boost of up to 32.2 cfm and 28.5 cfm on the intake and exhaust sides, respectively, and a horsepower boost of up 20 hp, the 243 heads stand out among others.

Q: How much HP gain from port and polish?

Porting a vehicle’s cylinder heads can improve the horsepower gain up to about 25 HP more compared to its original stock setup. However, the cylinder head’s original state and the quality of the auto mechanic’s workmanship in porting the heads are factors you must consider.

Therefore, it is crucial to consult an expert auto mechanic who has a series of past experiences in porting cylinder heads. A perfect port and polish should deliver an incredible horsepower gain to improve your vehicle’s performance.

Meanwhile, the GM’s Sierra 1500 and Silverado manufactured between 1999 and 2013 came with 243 heads. The vehicle engines exert so much power with high performance and efficiency due to the cylinder heads that they carry.

Yes, the 243 heads have a cathedral shape intake port, offering smaller chambers than their rectangular port counterpart. The 243 heads compression ratio is capable of enhancing power output by 3 to 4 percent, running up to 25 horsepower.

The 243 heads are a perfect choice if you desire to carry out a porting job. Swapping to 243 heads alone can boost horsepower tremendously. However, the presence of an aggressive cam and a nice valve lift can deliver more excellent power output for high performance and efficiency.

Important information about the GM 243 heads has been critically unveiled. You’ve learned the essence of having incredible cylinder heads in a vehicle. Vehicle enthusiasts argue about 243 heads Vs. 799 as well as 243 heads Vs. 862 heads.

However, if you desire improved horsepower with excellent power output, the 243-cylinder head is a perfect choice. Meanwhile, you must contact an expert auto mechanic with an intensive understanding of performing the porting job.