There is more to that functional engine that makes your vehicle move. There are a host of other car parts that work in tandem to get your car moving. One such vehicle part is the serpentine belt. This is a vital but less discussed vehicle component, which can bring your vehicle to a halt if it is faulty. Given its significance to your vehicle’s performance, you must be able to recognize bad serpentine belt symptoms. If you are looking for an answer to the question, does the serpentine belt affect the transmission? You might want to continue reading because the rest of the article will focus on many things that you need to know about serpentine belts.

What is a Serpentine Belt?

Older vehicles have engines with several V-type belts (more on that later), with each of the belts powering at least one component. The downside of this system is that there is always a need to maintain and replace several belts. The introduction of the serpentine belt changed that. 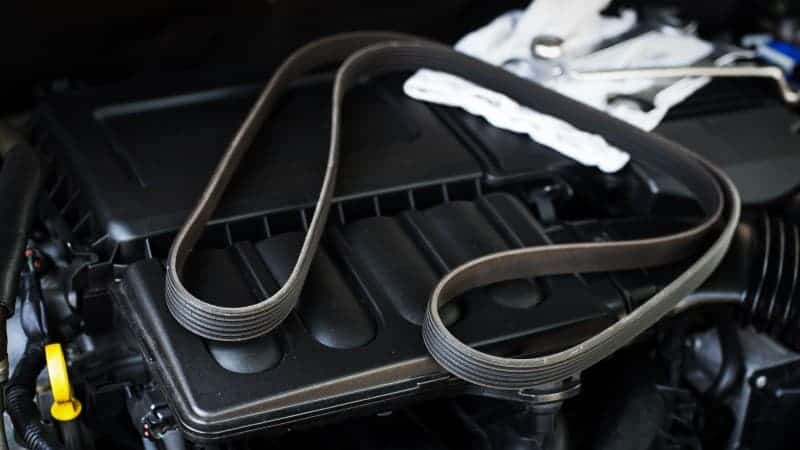 The engine component known as the serpentine belt is a long, winding belt (hence the name “serpentine) that connects several accessories to the main drive pulley. The engine turns this pulley, so when you turn your vehicle’s engine, the crankshaft spins, and this motion turns the pulley. As the pulley rotates, the serpentine belt moves and powers the vehicle’s accessories connected to it: the power steering pump, the radiator fan, the alternator, and the air conditioning compressor, among others.

The serpentine belt is situated outside the engine block and is relatively easy to identify. It is a black, ribbed,snake-like belt on the outside of the engine block. It coils on other vehicle components and is continuously turning for as long as the engine runs.

It can either be tensioned automatically or manually; however, if you drive a modern vehicle, you are more likely to find an automatically tensioned serpentine belt on your engine. The automatic tensioner serves to keep the serpentine belt at the right tension as it always applies the right amount of tension to the belt. Without the right tension, the possibility of the serpentine belt slipping and disengaging from the pulley increases. You don’t want that to happen because the engine will stop running after key components powered by the belt no longer work.

There are several reasons why you might need to replace your serpentine belt. The belt might not be well-adjusted on its pulley, it might be contaminated by fluid or just worn out from frequent use. Regardless of the reason, serpentine belts almost always let you know when they are about to fail. Detecting symptoms like bad serpentine belt sound or power steering noise and promptly acting on them will save you a lot of problems with your car. 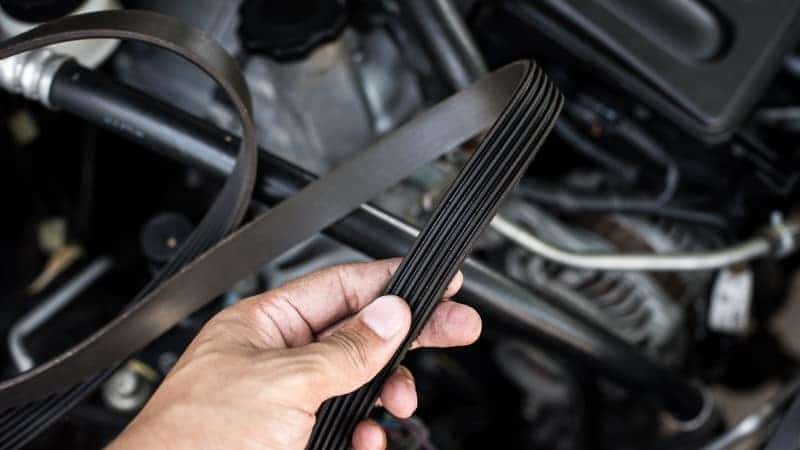 Whenever you notice a whining sound that increases and decreases according to the engine’s speed, there might be a problem with the serpentine belt. When the belt is pulled too tight, there is a possibility of putting too much load on the bearings of the pulleys connected to the belt. The whining sound is a result of an overloaded accessory pulley. It is one serpentine belt noise that indicates that there is an issue with your serpentine belt.

Vehicle performance issues can also indicate a problem with your vehicle’s serpentine belt because bad serpentine belt causes loss of power. Indeed a problem with an overheating engine, the air conditioning or the power steering are different symptoms that reduce your driving experience. When you notice a combination of issues like rough idle, flickering lights when you start the engine, dimmed headlights, and difficulty in starting the vehicle (which mostly points to alternator issues) you want to check the serpentine belt. So if you have searched for answers to the question, can a bad serpentine belt cause rough idle? The answer is yes.

Depending on the vehicle, a bad serpentine sound is similar to a screech, a whine, or a squeal. Whatever name you give the sound, it is loud and highly unpleasant and is one of the more obvious signs of a bad serpentine belt. Sometimes, this sound gets worse when you drive uphill or try to turn the steering wheel.

Can A Bad Serpentine Belt Cause Acceleration Problems?

Yes, it could. Bad serpentine belts cause loss of power. Especially in situations where slippage occurs and the alternator supplies power to the ECM. In such conditions, the alternator cannot provide the required electrical charge, and as a result, there is a drop in the voltage.

How Do I Know If My Drive Belt Needs To Be Replaced?

Another name for the serpentine belt is the drive belt. There are a lot of signs that indicate that the drive belt in your car is bad. The first step is to know these signs for what they are. The second step is to carry out regular vehicle inspections by yourself or with a mechanic’s help. Regular checks ensure that you can identify a bad drive belt as early as possible. Some of the signs you might notice are squealing, whining sounds, a damaged belt, and an overheating engine, among others. When you are quick to note these signs’ presence, especially bad serpentine belt tensioner symptoms, it becomes easier for you to detect when your drive belt needs to be changed.

What Happens If Serpentine Belt Breaks While Driving?

The vehicle shuts down after a while because the engine can’t operate with a broken serpentine belt. This is because the belt is responsible for a range of functions like steering wheel control. So when the serpentine belt breaks while driving, a range of things occur. For one, it becomes difficult to control the steering. The battery will die after a while since the alternator can no longer charge it. The water pump stops working too, so the engine starts to overheat after some time. At a point, the engine will pack up and will require being towed. So yes, a bad serpentine belt cause loss of power.

How Many Years Does A Serpentine Belt Last?

Thankfully several symptoms are associated with a bad serpentine belt. So once you can identify bad serpentine belt symptoms, you can manage the situation before it deteriorates. Your best bet is to have a seasoned automotive mechanic inspect your serpentine belt, belt tensioner, and engine components regularly.