A lot of people are not sure if there’s a difference between timing chain vs timing belt, and since they both have the same function in an engine system. They take them to be the same, but that’s a misconception.

Timing belts and chains are vital parts of an engine that contribute to an engine’s smooth operation, and every car is designed with either a timing belt or timing chain. No car has both.

Despite their similar responsibility; there are slight differences between these two. That leaves you wondering what could be the difference between a timing belt and a timing chain.

The timing chain is part of a system internal combustion engine that helps to synchronize the camshaft and crankshaft so that your vehicle’s engine valves can easily open and close appropriately during each exhaust strokes and cylinder’s intake. 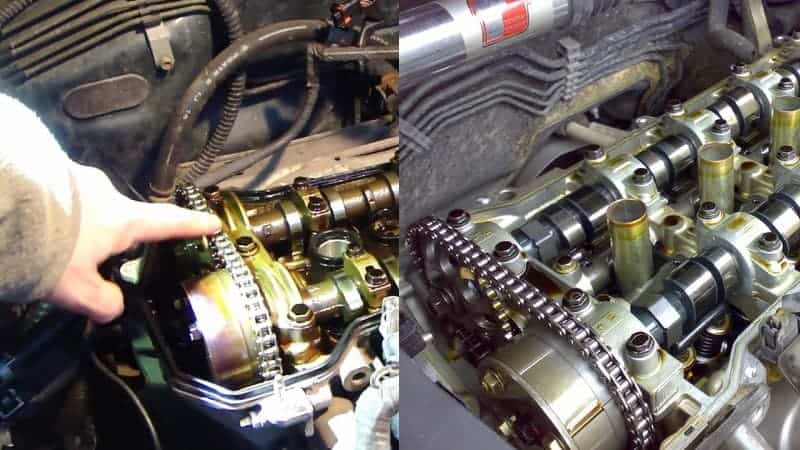 Timing chains have a longer lifespan, and from timing chain vs timing belt cost analysis, chains are more expensive, but they don’t need frequent replacement. They also help drive the cams and support to operate valves that deliver fuel to the extracts and combustion chambers.

In other words, the timing chain plays the role of a connection link, connecting both the upper part of your vehicle’s engine (valves and cylinder heads) and also the lower part which includes the (crankcase and piston).

It looks like the chain found in a bicycle and it makes more noise than a timing belt. Proper synchronization between strokes occurring and the valve timing in the car’s cylinders is necessary for the provision of good engine performance, adequate power supply, and good fuel management.

The crankshaft’s four-stroke engines rotate twice faster than that of the camshaft, and the timing belt is needed to synchronize them.

One of the disadvantages of the timing belt is that it tends to stretch after a certain period of use, which makes banging and scratching noises when driving.

Damage to your vehicle’s timing chain tensioner can cause it to decline during an engine operation.

They also possess less friction, which helps achieve less contact with the piston and valves, preventing the valves from striking the piston. The timing belt has a tooth-like shape or a round belt with teeth on the surface. 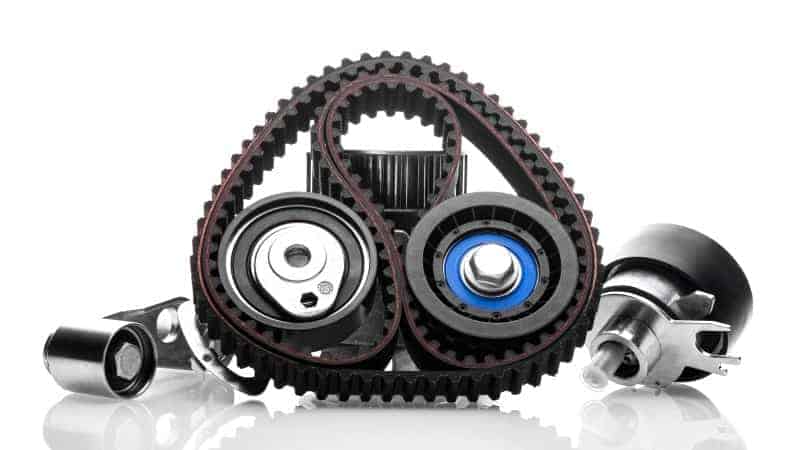 A timing belt has the same functions as the timing chain and even in the same manner, but instead of chains, they are made of rubber and fiberglass. The belt is used to control the camshaft’s operation and it’s mounted on the ribbed gears close to the ends of the camshafts and crank.

Timing belts have a lesser lifespan than the timing chain. They are lighter, less expensive, and operate more quietly.

A timing belt also connects the engine camshaft to the crankshaft or the other way around so that the valves open and closes rhythmically in link to the piston’s position.

Timing Chain Vs Timing belt: What are the differences?

Well! The primary difference is that one is a chain; the other is a belt. But that’s not so much of a distinguishing factor, to know the actual difference between these two, you have to be acquainted with what ‘engine timing’ is all about, it’s why you need a belt or chain in your vehicle.

A lot of modern vehicles are designed with four-stroke engines. Reasons because a combustion process involves a compression stroke, intake stroke, exhaust stroke, and a power stroke. During the four-stroke cycle, the crankshaft rotates twice, while the camshaft just once.

The connection between your crankshaft and camshaft is what defines the term ‘engine timing’. This regulates the motion of your valves and pistons fixed in your cylinders.

The valves are meant to open up at a specific time along with your pistons. If these parts cannot function, you might not run your engine, or your engine won’t work correctly.

In as much as timing belts works the same way a timing chain works, they have some distinguishing difference as well which we’ll be discussing in the next lines.

Because of the material used in manufacturing timing belts, they are quiet and less expensive while timing chains are more expensive and make more noise than the belt.

Recently, many car manufacturers have started integrating timing chains that have noise reduction. As well, many manufacturers have integrated timing belts that can be replaced without replacing the water pump unlike how it used to be years back.

Read Also: SOHC vs. DOHC: Which Engine Is the Best?

Timing chains are most times preferred than chains, mostly for modern cars. This is because of the durability of timing chains.

However, both have their pros and cons. The manufacturing of affordable vehicles prompted the use of a timing belt, which is a less quiet and costly material.

Before you conclude which is better, you should know the timing belt vs timing chain pros and cons, so you make the right decision.

Its high durability property comes from the metal used in production.

Most manufacturers say you might not replace your timing chain, which is true if you can maintain your engine, mainly when you use the right oil.

However, you won’t have to be changing your chain regularly.

You don’t need to change your water pump while replacing a lousy timing belt:

This is one advantage timing chains hold over belts. For most vehicles that use timing belts, you have to service the water pump when replacing your belt.

But since the timing chain is not directly linked to the water pump, you don’t have to replace your pump while changing your chain.

Apart from the fact that timings chains are made of metal, it doesn’t change length or work based on temperature.

This reflects that a smaller tensioner for the chain is needed, and the chances of the chain breaking are meager.

As opposed to the belts, the timing chain does not slip.

Although a timing chain is more durable than a timing belt, a chain kit is more expensive than a belt kit.

It includes the chain and the labor cost to fix in the chain. Labor cost is high because timing chains are more difficult to replace.

The timing chains operate based on hydraulic pressure, which is sometimes a problem.

Q: Which is a better timing chain or timing belt?

Timing belts makes less noise than the timing chain because of the material used in production, which is also less expensive.

Timing chains are found inside your engine where oil passes through. It receives lubrication from the engine oil.

Also, chains last for a longer time; on the other hand, timing belts are found in your engine as well, but not directly where oil passes through. It tends to crack and dry out quickly.

Timing chains are more complex and heavier than a timing belt, and they are expensive to replace, but timing belts are cheaper.

Q: When should a timing belt be replaced?

The timing belts usually need replacement after every 80,000-120,000 miles, except your car has a specific problem. Timing belt issues are common in vehicles that have higher mileage.

Other studies have shown that the timing belt needs to be replaced after every 40,000 to 1,00,000 miles, determined by the make and model of your car.

When you feel that your vehicle’s engine is suddenly sluggish, having trouble starting, or low on power, it can be due to a worn timing chain, which may cause your engine light to come on. Your timing chain may also start making whining, whirring, or buzzing noises.

Q: Is the timing belt and timing chain the same thing?

Though these two functions are very similar and are said to have the same role, they are quite different.

Timing chains last longer, receive lubrication directly from the engine oil, and are found within the engine. In contrast, the timing belt is not found where oil passes through and is subjected to wearing out and drying.

Q: What vehicles have timing chains instead of belts?

Most BMWs have timing chains instead of timing belts, some other cars like Honda Jazz. Most Mercedes produced cars, all Cadillacs, Chevrolet Corvette, Dacia Duster, Alfa Romeo 159, Sandero Stepway, Mazda produced with a Skyactive-G engine, and also Sandero products are all built with timing chains.

Other cars like SAABs that are manufactured with turbocharged engines also use timing chains.

You can also check timing chain vs timing belt Reddit reviews just for more certainty. Usually, timing chains are supposed to last as long as your vehicle.

But due to poor production in making some timing chains, this might not be the case for every car model.

A timing chain will last up to or longer than 300,000 miles in a high- maintenance car engine.

So this article has settled any misconception you might have about timing chain vs timing belt. You now know the differences that separate them, and though there are preferences on these engine parts, they both have good qualities that make them unique.

If you still have some questions on this subject, you can always get back to us for more info.