In cars, fuses act as a safety feature that protects electronics from blowing up due to a power surge in the system. A fuse is typically a two terminal with a small metal strip across them—the metal strip cuts whenever there’s a power surge, preventing the key component from damaging.

Cars have several electrical and electronic appliances and various fuses to protect these components from damage when there is a power surge. These fuses have different amperages. We have 5, 7.5, 10, 15, 20, 25, 30, 40, 50, 60, etc. Here, we’ll answer the question, what does a blown 60 amp fuse look like? At the end of this article, you’ll be able to tell when a 60-amperage fuse is burnt by just looking at it. 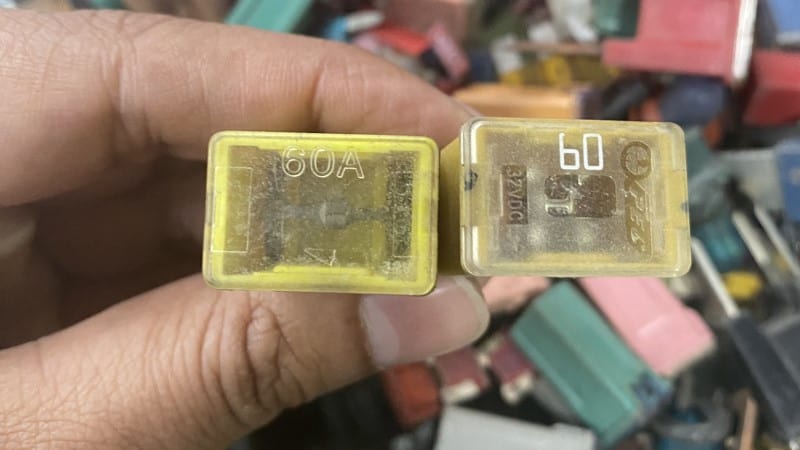 As explained earlier, car fuses are a set of fuses used to protect electronic and electrical components from power surges. These fuses are rated for circuits with no higher than 32 volts.

60 amp fuses are typically located in fuse boxes in the cabin or under the hood. The fuse box contains several fuses that control different electrical circuits. The fuse box cover has a diagram that indicates what each fuse protects. Here are what 60 amp fuses protect in cars;

A 60 amp fuse protects the alternator circuit, ensuring the vehicle runs with the appropriate electric voltage.

Most auto manufacturers protect the power windows with a 60 amp fuse to prevent any damage when there’s a power surge in the vehicle.

Power seats need high voltage to work smoothly. Because of this, most car manufacturers protect them against power surges with a 60 amps fuse.

The ac compressor is the heart of the air conditioning system. It compresses the ac gas before exporting it to other ac system components. It, however, requires high electric flow to carry out this function. So, automakers safeguard them with a 60 amp fuse against a power surge.

Car high and low-beam headlights run on different circuits. The high beams require higher fuse amperage, like 60 amps, to protect them against power surges since they use more electric flow than the low beams.

It’ll be unfair if I fail to mention that different cars use different electrical systems and, therefore, different fuses. This means a Toyota Camry can use a 40 amp fuse for the high beam lights while a Chevy Silverado uses a 60 amp for the same high beam headlight. So it’s essential to check the drawing on the fuses or your owner’s manual to know what component uses 60 amp fuse in your vehicle.

While fuses blow and prevent electric flow from passing to the vital component whenever there is a power surge, it doesn’t necessarily mean the fuse is blown when an electrical or electronic component is not working. Therefore, it is necessary to test the fuse before replacing it.

If the metal strip is broken or you notice a powder or burnt-like substance, you likely have a blown fuse. However, if you’re not convinced with the result, proceed to the next method.

Every electrician should have a test light. It serves several electrical purposes. To check a 60 amp fuse with a test light, connect the wire to the negative battery cable and touch the other end on the positive battery cable. If the tester bulb glows, you have a good connection.

Now, touch the screw end of the tester on both fuse ports. The tester should illuminate as you place it on both fuse terminals. If none or only one of them illuminates light, it means the fuse is blown.

You can get a multimeter from a friend or buy one from an online or local auto spare part shop. Connect the black and red probes. After that, place the probes against each other and see if the multimeter will display any reading. Write down any readings projected on the screen. This will help you know whether the multimeter is working properly.

Follow the test light and visual inspection method if you’re asking how to tell which fuse is blown in-house. They are typically the same. The only difference is that the test light approach needs power from the battery when testing car fuses, while the fuse in your house needs a power supply in the house. 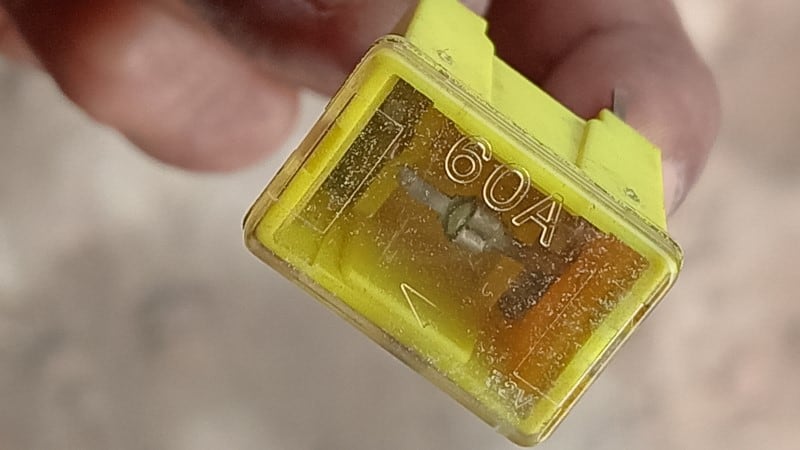 By default, electric current runs from the battery to one of the fuse metal poles and travels from the tiny metal strip to the other terminal. The second metal pole transmits the voltage to the vital component they are safeguarding through an electrical wire.

If there’s a power arching, high voltage, or power surge, the tiny metal strip will break, preventing the electric voltage from traveling to the second metal pole and the main component they are protecting.

One of the common car main fuse blown symptoms is that the key component will stop working. In any case, other factors can prevent the critical component from working. So you have to check the fuse itself to know if something is wrong. As mentioned earlier, you can do this by visual inspection. Look at the fuse terminals inside the glass for a metallic or dark smear or a disconnected strip across the terminals. Any of these indicates you have a blown fuse.

Q: How can you tell if a fuse is blown without a tester?

To check a fuse without a test light, you can inspect it visually or use a voltage tester or a light bulb. The first step is visually inspecting the fuse to see if the metal strip is still connected. If you’re not okay with the visual test, re-test it with a voltage tester or light bulb. If these testers glow, the fuse is okay, but you have to replace it if they don’t.

Q: Is a blown fuse obvious?

A blown fuse is obvious because the metal strip that runs across the fuse terminals will have melted or broken from the power surge in the system. A blown fuse will prevent the main component it is guiding from working until you replace it. You can identify a blown fuse using a test light, multimeter, or visual inspection.

It’s normal for car fuses to blow out. Their primary purpose is to make a fall whenever there’s a power surge in the car’s electrical system, preventing the main component from damage. It can only be an issue when the fuse keeps blowing out. If this is the case, you have to contact a service technician to run a thorough diagnosis and proffer a solution to the problem.

This article has answered the question – what does a blown 60 amp fuse look like? At this point, you can easily tell when 60 amps and other fuse amperages are bad.