Most folks do not carry coolant or any lubricant in their car while driving. But what happens if the car runs out of coolant while on the go and has only water as an option? Can you use water as coolant in such a situation?

It’s common for most people to put water in their radiator instead of antifreeze when they run out of coolant. Some folks believe it is safe to use distilled water instead of antifreeze, especially if you reside in extremely hot weather. If the fluid will not go below 32 degrees Fahrenheit, why do you care about stopping it from freezing?

Water is quite cheaper and can also prevent overheating. So, why do you need a coolant? A simple answer is that coolant offers a more efficient cooling function than water.

In this article, we’ll examine whether using water instead of coolant is possible. And if yes, how long can you use water as coolant? But first, let’s see the difference between water and coolant. 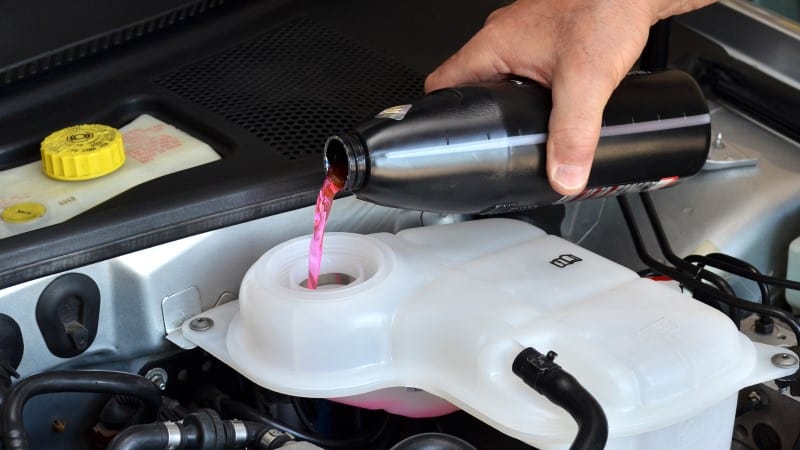 What is the difference between water and coolant?

To better understand the difference between water and coolant, we’ll look at their boiling point, freezing point, and protection against corrosion.

So, if you continue driving with water instead of coolant for an extended period, the engine will likely overheat. The water will boil faster than coolant and evaporates, calling for the need to pull over for the engine to cool. Overheating engines can cause catastrophic engine damage, leaving expensive car repair bills on the table.

If the radiator cracks due to freezing, you need to fix it immediately. What if it happens in the middle of nowhere? Do not even attempt to drive with a cracked radiator because the entire cooling system is useless at this moment.

One of the major disadvantages of using water as coolant is that the compounds in the water will leave a deposit in the system, reducing cooling efficiency. Undoubtedly, water can corrode metal, and most cooling system components are built with metal materials.

Can You Use Water as Coolant?

Considering the boiling and freezing point of water and its inability to protect your car engine against deposits and rust, it cannot do the job of coolant. Additionally, coolant absorbs heat more effectively. However, you can use water instead of coolant in an emergency, but you have to drain the water and pour in coolant once you get home.

So, if you were asking, can you use water as coolant temporarily? The answer is yes. But what happens if you continue driving with water for an extended period?

What happens if you use water instead of coolant?

We have established that you can use water as a coolant in an emergency. But that doesn’t mean you should continue driving with it for an extended period. If you continue driving with water for an extended period, you risk the chances of deposits and rust in the cooling system components. Plus, the engine can overheat in hotter climates, and the radiator may crack in colder climates, leading to water leaks.

Water (coolant) leaks will cause engine overheating and accelerate engine breakdown. Therefore, it is important not to use water instead of coolant unless in emergencies. And you have to drain the water and pour in coolant or antifreeze once you get to your destination. 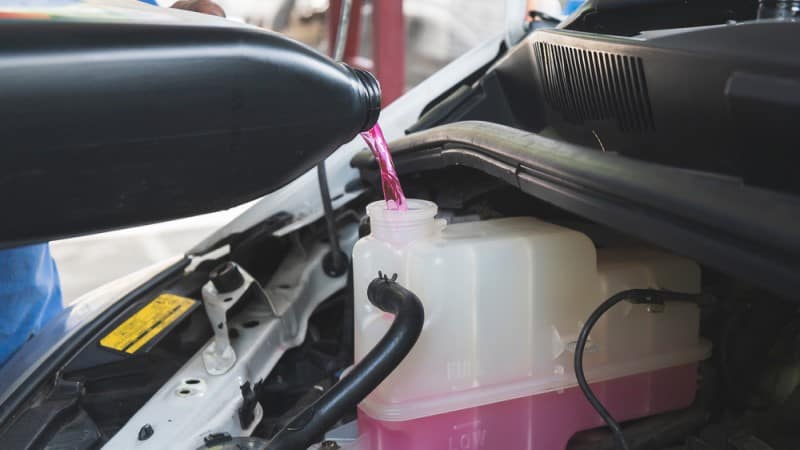 Q: Can I run straight water as coolant?

If you’re asking, can you use water as coolant in a diesel engine in winter or summer, the answer is yes. Using straight water in your car is okay in an emergency. However, driving with straight water for an extended period will be detrimental to the cooling system components and the engine.

Q: What can I use as a temporary coolant?

One of the questions we get over the phone in our garage is, coolant is low; can I add water? If you run out of coolant, you can use water as a substitute until you get antifreeze or coolant. However, distilled water is preferably okay than tap water. In any case, you can use distilled or tap water in an emergency.

Q: How long can I drive with water in my radiator?

While there is no recommended time you should drive with only water in your radiator, you can safely run with water for 60 to 300 miles without any damage. Of course, this depends on the type of water you use and your climate conditions.

Q: Can I mix the coolant with tap water?

Do not mix coolant with tap water. Instead, use distilled or de-ionized water. Here’s why I said so; tap water has some materials that can form deposits and eventually rust the cooling system components and the engine coolant compartment. This can lead to engine overheating over time, causing severe engine breakdown if not fixed on time.

Q: Will a car overheat with distilled water?

Q: How do I make my own coolant?

Use Water Instead of Coolant in Emergency

We’ve explained the difference between water and coolant and whether you can use water instead of coolant. So you will no longer ask, can you use water as coolant? The simple answer is yes, but only in an emergency. If you drive with straight water in the radiator for an extended period, you risk causing rust formation and engine overheating.