Car engines use the air-fuel mixture and spark to produce power in the combustion chamber during the combustion process. Then, the car engine transfers the generated energy to the transmission to move the wheels. This process continues with maximum effectiveness until you turn off the engine.

This article will discuss common causes of loss of power while driving and highlight probable solutions to the problem.

A vehicle engine is a fine-tuned machine with several car sensors and components that works in harmony to produce optimal performance. If any of these sensors or components dies, it’ll alter the overall engine performance.

Therefore, a loss of engine power is a real-time problem and indicates a system malfunction. Here are probable causes of loss of power in a vehicle. 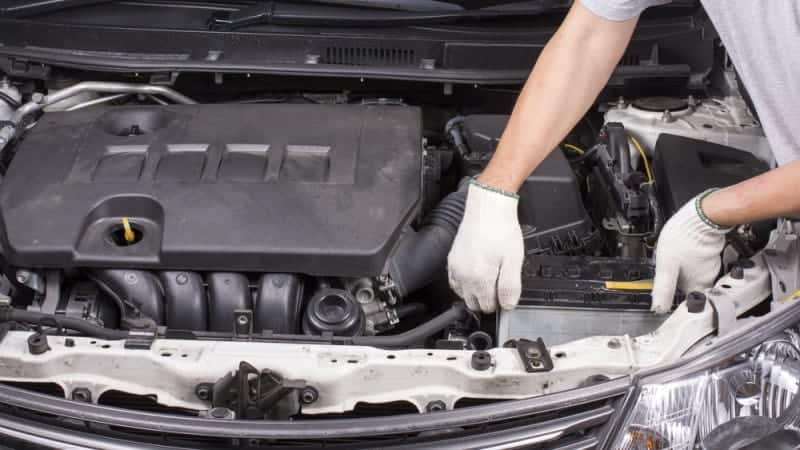 Fuel injectors perform a vital role in the optimal engine operation. However, if the fuel injectors fail or leak, they will not provide adequate gas to the combustion chamber, especially on higher revs.

Aside from the loss of engine power, faulty fuel injectors can cause other problems like engine misfiring, rough idling, and engine hesitation or stalling. Also, if there’s a gas leak, you’ll perceive a gas smell around the injectors.

The catalytic converter is an essential exhaust system component that converts harmful gas into less harmful emissions before releasing them into the atmosphere. So, if your car loses power or runs slowly, it could mean you have a clogged catalytic converter.

If the catalytic converter clogs or blocks, it’ll block the exhaust gases from getting out of the car. This will lead to a loss of engine power and overall poor performance.

Exhaust backfires can be caused by a bad MAP, MAF, IAT, fuel pump, fuel tanks in the gas tank, or issues with the injector or carburetor.

If this happens, your car may switch to limp mode. This mode will restrict your vehicle’s performance. The vehicle will not shift to higher gears until you fix the underlying problem.

For an engine to provide optimum performance there must be proper cylinder compression during the combustion process. If the vehicle has low compression, there will be low power output.

So, if your car loses power while driving and jerks, a low engine compression can be the culprit. However, there could be many causes. So, don’t conclude yet until a thorough diagnosis proves the cause.

A vehicle engine requires an adequate air-fuel mixture ratio for a complete combustion cycle in the combustion chamber. Therefore, the air will pass through an air filter before entering the manifold for mixing purposes. This component prevents dirt, bugs, debris, and other contaminants from getting into the engine.

As the air filters prevent these contaminants from damaging the engine, these impurities build up and clog the air filter over time. When the filter gets clogged, the engine will suffer insufficient air, causing low power output.

The camshaft position sensor monitors the rotating speed of the camshafts and sends the readings to the powertrain control module (PCM).

The PCM is also known as the brain of the car. However, it is primarily called a car computer. Once the car computer receives readings from the camshaft sensor, it uses the data to monitor and control the ignition and fuel injection.

If the camshaft sensor sends inaccurate data to the powertrain control module, it’ll affect the overall fuel injection and ignition. Of course, compromised fuel delivery and ignition will cause low power output or loss of engine power.

The oxygen sensor monitors and measures the exhaust byproducts that leave the engine after each combustion cycle. After that, it sends this information to the car computer. The computer uses this data to re-determine the real-time air-fuel ratio that gets into the combustion chamber.

The oxygen sensor is mounted on the exhaust pipes. It assists the fuel injection system and the engine timing in doing their jobs accordingly. It also helps in emission control.

Unfortunately, if this sensor fails or malfunctions, it’ll send false readings to the car computer. As a result, the car computer will not know the real-time air-fuel ratio entering the combustion chamber. And this will cause the car to lose power when driving uphill or downhill.

So, if this sensor fails, it may result in a car losing power and juddering.

If the pump fails, it can cause several drivability issues. For example, if your car loses all power while driving and won’t start, it could be you have a bad fuel pump that is not sending gas to the injectors.

A gasoline engine will not start without spark plugs. The plugs ignite the air-fuel mixture into the combustion chamber by transmitting electrical current from the ignition coils.

Therefore, the engine will suffer if the plugs die and won’t transmit the electrical current properly. It’ll only cause engine misfire or rough idling in the initial stage. If you ignore it for an extended period, it’ll worsen and cause starting issues.

The ignition coil is an essential ignition system component that converts 12 volts from the car battery to 20,000 volts needed to start the engine. If one or more of your spark plugs are not working properly, it’ll not provide enough power needed to burn the air-fuel mixture in the combustion chamber.

This means you won’t get the desired result when you depress the gas pedal. There are several causes of unresponsive gas pedals, but the common ones are defective EGR valves, failing turbos, and bad injector pumps.

Regardless of the cause, always run a thorough inspection and fix the cause of the power loss. If you ignore this lousy ignition for an extended period, it’ll cause severe catastrophe to the engine’s overall performance.

How Can I Restore The Power In My Car?

We’ve discussed what causes a diesel engine to lose power while driving. The highlighted reasons above affect both petrol and diesel engines.

The fuel system comprises many components, such as a fuel pump, fuel filter, injectors, etc. As common as adding fuel injector cleaner to your gas tank after refueling, it can reduce emissions, clean the fuel system, enhance engine longevity, and restore performance.

Car losing power when it gets hot is a common symptom of a bad fuel pump. A bad fuel pump can also prevent your car from starting. If your pump is bad, replace it and enjoy optimal engine performance.

The engine control unit uses fuel injectors to send the required amount of fuel into each cylinder. If one or more injectors fail, that cylinder will suffer during the combustion process. Diagnose and replace any faulty injectors. 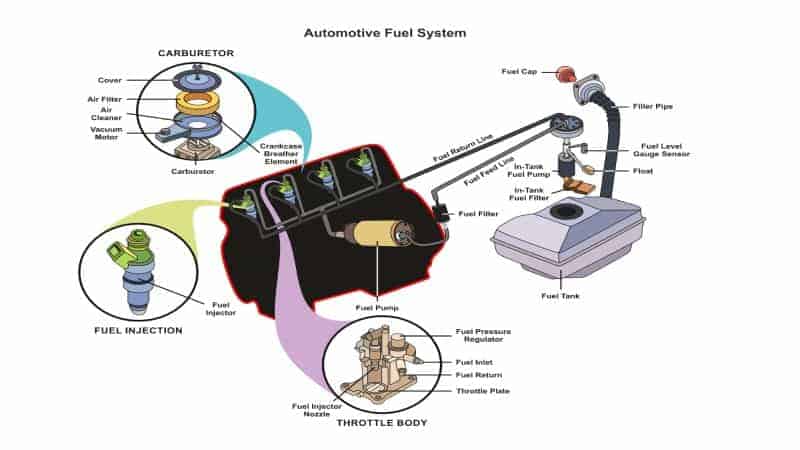 Spark plugs and the ignition coils work in harmony to ignite the air-fuel mixture during a combustion cycle. If these components fail, there’ll be unburnt fuel in the combustion chamber, reducing engine power. Unfortunately, there are no spark plugs in diesel engines. So instead, automakers replace them with glow plugs.

If this is why your car is losing power while driving, inspect and replace defective ones. Remember, older cars use ignition cables while newer ones use ignition coils. These components work hand in hand with the spark plugs. They transmit electrical current to the plugs for ignition purposes.

Therefore, inspect them and replace defective ones when checking the plugs. They can also be the culprit.

Diagnose the vehicle with an OBDII scanner to track the faulty sensor and fix it.

The exhaust systems such as mufflers and catalytic converters play important roles in silencing the exhaust noise and exporting exhaust byproducts into the atmosphere. However, if these components clog, they’ll fail to carry out their jobs effectively and cause engine power loss.

Q: Why does my car have no power when I accelerate?

A loss of engine power is usually caused by malfunctions in the mechanical and electrical engine components. Sometimes you can rectify these problems by changing the spark plugs, cleaning the distributor rotor, or cleaning the MAF sensor.

Here are the mechanical problems that could cause a loss of engine power when accelerating;

Here are the electrical components that could be the culprit;

Lastly, one of these fuel system and exhaust issues could be the culprit;

Q: How do I know when my fuel pump is bad?

The importance of a fuel pump in a vehicle cannot be overemphasized. Without it, a vehicle will not start. Thankfully, it shows several symptoms when it starts failing to notify the driver to change it on time.

A failing fuel pump will show one or more symptoms before it finally stops working.

Q: Why do cars lose HP over time?

Every vehicle engine loses power over time due to friction and wear and tear on various engine components. However, a car engine loses power because of one of the following factors: improper combustion, low compression, or inappropriate air-fuel mixture ratio.

As we explained above, your vehicle engine needs an adequate air-fuel ratio for optimum performance. If the air filter clogs, it’ll restrict adequate airflow to the engine. This will suffer the combustion process. Secondly, if the exhaust pipe clogs, thereby restricting the exportation of exhaust byproducts, it’ll lose engine horsepower.

Q: Why is my car juddering and losing power?

Fouled or faulty spark plugs are the common cause of car juddering. In addition, a blocked air filter and injection system problems can send an obscene amount of air and fuel into the combustion chamber, causing the car to stutter or judder.

If the juddering and loss of power only occurs on idle, you may have a worn-out car sensor like a camshaft sensor or a small fuel leak on the engine vacuum.

The Pistons in the engine cylinder walls generate torque as they reciprocate up and down on the crankshaft. Now, do cars lose this torque?

Wear can reduce vehicle torque and horsepower. Here’s what you need to know. There’s no doubt; that wear and tear will run your engine down. There will be a loss of torque, horsepower, and bad gas mileage due to wear and tear.

Q: Can a bad transmission cause power loss?

Yes, in some cases, a bad transmission can cause power loss. If you’re driving and the vehicle is revving pretty fine, but there’s poor acceleration, it’s a symptom of a transmission failure.

However, there are several other causes. First, inspect the vehicle properly before drawing a conclusion.

You’ve learned why your car loses power while driving and ways to restore engine power. At this juncture, you won’t ask, ‘why does my car have no power when I accelerate?’ because we’ve outlined the probable reasons.

However, contact your mechanic if you don’t trust your guts and you’re not comfortable diagnosing a car that won’t accelerate. He’ll run a professional diagnosis and fix the problems.