Suppose you have also experienced power steering pump failure, alternator failure, and irregular idle engine speed. In that case, these are signs that you need to replace your vehicle’s crankshaft pulley, which is most likely responsible for those challenges.

How to Remove Crankshaft Pulley without a Puller

It is essential to ensure that you take safety measures as you prepare to remove your vehicle’s crankshaft pulley without a puller. Remember, “safety first.” You need to wear your safety gear, hand gloves, and eyeglasses for the protection of your eyes. Then, park your vehicle on plain leveled ground, turn off the engine and engage the parking brake. After that, you can engage the following steps on how to pull a crankshaft pulley without a puller. 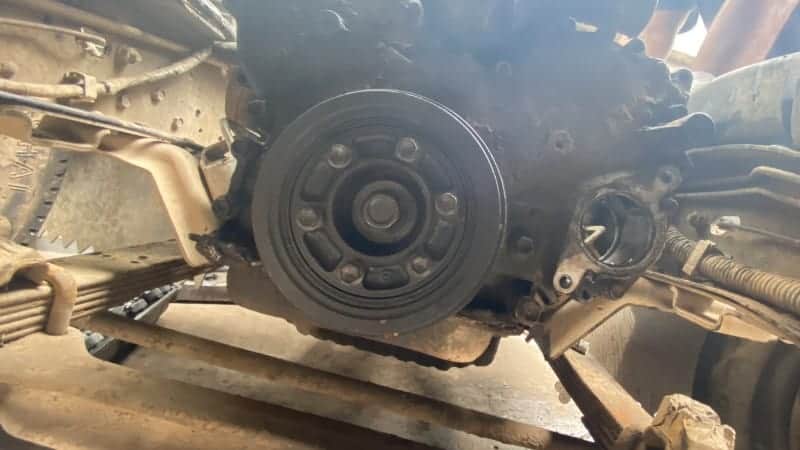 Step 1: Take off the serpentine belt

First of all, you need to remove the serpentine belt, also known as the drive belt or accessories/ alternator belt, to access the harmonic balancer. To do this, take off the car’s engine cover, and the shrouds or plastic guards used to cover the engine working area. Then, locate the serpentine belt beneath the spring tension to exert pressure on the belt, which helps ensure that it is secured.

After that, use a wrench socket to push the tensioner towards the opposite direction of the spring to enable its release. Shift the belt off the pulley closest to it. Then proceed to remove the drive belt from the pulley at the bottom and other pulleys. This is also the first step on how to remove harmonic balancer.

The center bolt can be found in front of the crankshaft. It is responsible for holding the harmonic balancer in its position. The center bolt is very tight, and you would need some other tools to enable you to loosen it.

You can now use a big screwdriver behind the crankshaft pulley to carefully drag it out. You may also use a ½” or ¾” powerful impact gun to hammer it out. 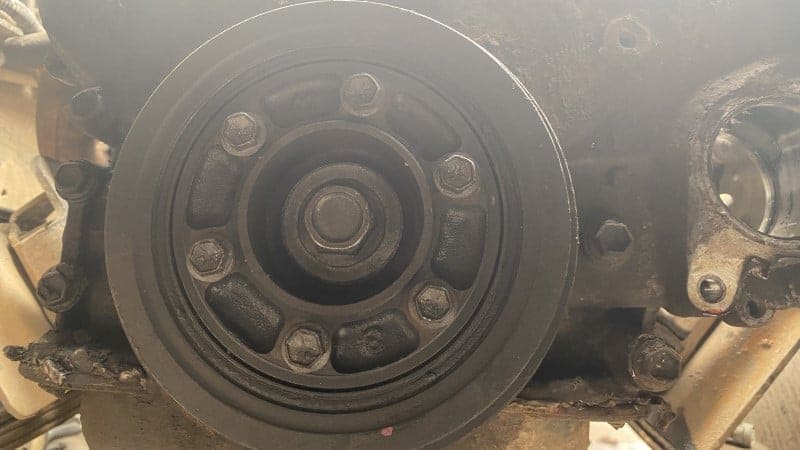 Q: How do you remove a stuck crankshaft pulley?

Do you have a stuck crankshaft pulley that needs to be removed immediately? Here’s what you need to do.

Use a long breaker bar.

Get a powerful impact.

You could rent a ½” or ¾” powerful impact drive and use it to break the stuck crankshaft pulley. Ensure to get a plug-in model because you may spend between 8 to 10 minutes reefing the bolt. Also, endeavor to spray the crankshaft pulley bolt with lubricant to enable it to free up a little. You can do this at intervals as you hammer on the bolt.

Q: What tool is used to remove the crankshaft pulley?

The tool suitable for removing a crankshaft pulley is a half-inch drive impact gun. You could also use a torque wrench to secure it properly. Therefore, it would be helpful to follow the service manual guideline when removing a crankshaft pulley and observe the safety precautions before raising and supporting your car’s front portion. As the acronym “ABC” goes, “Always Be Careful.”

Q: How much does it cost to fix a crankshaft pulley?

The estimated cost of replacing/fixing a crankshaft pulley is around $350 to $400. The cost of parts is about $200 to $220, while labor cost is estimated between $150 and $180. However, the costs may vary from one location or service provider to another. Ensure to locate an auto mechanic in your neighborhood who can do a good job of fixing your vehicle’s crankshaft pulley without errors.

Since a bad crankshaft pulley projects an irregular idle speed, power steering pump failure, alternator failure, engine vibration, etc., trying to manage the situation can cause serious damage to your vehicle. Why not change the crankshaft pulley instead of ignoring the problem? It would save you the energy, time, and money you may have to spend if there are any further damages.

If you are okay with this information on how to remove crankshaft pulley without a puller, you may have to take your car to a professional auto mechanic to help you fix the issue. Never ignore little problems for too long; they can escalate and cause more damages.