Therefore, the most important thing to do is find out why your engine emits smoke and address the issue accordingly. So what is the cause of steam coming from engine?

What causes smoke coming from engine?

The most common cause of steam coming from engine is overheating. It could also be due to bad wire casing or liquids such as oil, transmission, or brake fluid accidentally splashing on the engine block. In some cases, low coolant. Here are some other reasons your car emits engine smoke. 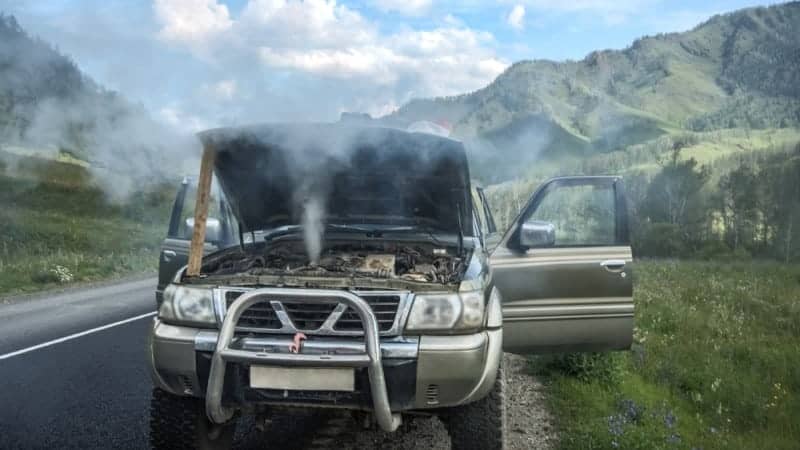 The diesel or fuel injector, depending on engine type, ensures it delivers the right amount of fuel to the engine. This fuel mixes with air for combustion. However, if the injector becomes worn or clogged over time, it may give this mixture too much fuel. Because the fuel doesn’t burn properly, you start seeing smoke emitting from the engine.

The fuel pressure regulator controls the pressure of fuel delivered to the engine. When it becomes faulty, it won’t be able to regulate the fuel pressure, hence, resulting in engine smoke.

If it gets clogged, worn, or starts failing, it delivers a lean mixture that doesn’t have enough fuel, causing backfiring and overheating. Hence, the emission of engine smoke.

During the ignition cycle, the fuel must ignite at the right time, so the fuel burns correctly. With your ignition timing off, the engine will consume more fuel than needed and emit a cloud of black smoke.

The radiator hose is responsible for moving coolant within the radiator and engine and then back to the water pump. This helps remove much heat from the coolant before going back to the engine.

But if this hose is clogged or faulty, it won’t be able to move coolant to where it is being cooled. Hence, the coolant becomes too hot and causes overheating in the engine resulting in the emission of white smoke.

The engine block holds most engine parts together. Exposure to extremely low temperatures can cause coolant to freeze and push against the engine blocks and cause cracks. A cracked engine block will not allow engine components to perform properly, resulting in the emission of white smoke.

External coolant leaks could be caused by a blown head gasket or cracked hoses. When these components become faulty, they can leak out into the exhaust pipes or engine compartment. This liquid coming in contact with these hot parts can cause vapor to form a white smoke. If the leak is serious, it will be seen on the exhaust manifold. However, you may not notice sometimes.

A broken cylinder head may leak coolant into the cylinder or combustion chamber. As this coolant mixes with fuel and burns together, it will form a white smoke. So long coolant keeps seeping into the engine, the engine will never function properly, putting your engine at risk of overheating.

If you notice smoke coming from engine when raining, it is possible that water has come in contact with the exhaust or radiator and is burning off. This shouldn’t bother you as it’s very normal during the rainy days. 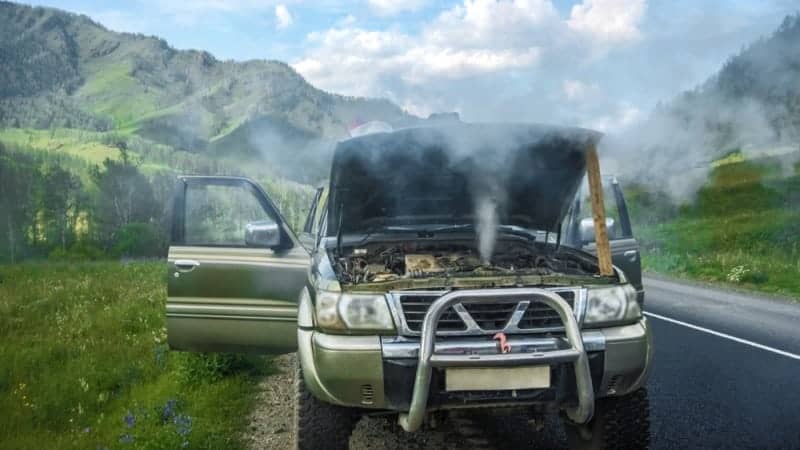 My Car is smoking–what should I do?

If your car is smoking, pull over.  Then quickly run your eyes through the warning lights and gauges to see if the engine is overheating. Which of the warning lights is on? You can also do a quick physical inspection. Chances are that you’ve run over a plastic bag that is burning on the catalytic converter.

Wait for the engine to cool down, then check the fluids. Are there puddles of fluid dripping on the ground or under the hood? If there are, you may need a tow truck to tow your car to a mechanic for a proper diagnosis to ascertain the cause of the droplets or puddles. The fluid shortage is one of the fastest issues that damage an engine.

How do I fix smoking engine?

The first thing is to diagnose what is causing the smoke. And a very easy way to know which components to be blamed is by carefully observing the smoke color or smell. Black engine smoke is often related to improper fuel burning caused by faulty fuel injectors, carburetors, pressure regulators, etc.

Guessing isn’t enough. You still need to make a proper diagnosis to confirm your hunch. Check seals or valves for leaks, your coolant level, etc. Afterward, fix whatever you find causing the smoke.

How do I prevent smoking engine?

To prevent engine smoke, you must avoid things that could cause it. For example, a clogged carburetor or radiator hose can cause engine smoke, so ensure they are always clean. Faulty engine parts could also cause it, so routine maintenance could keep them healthy.

Also, note the lifespan of these components and change when they are due. Check your fluid levels and condition; your fluid should not be contaminated or too low. With these things in place, everything should work right in your engine.

Q: Why is my car smoking under the hood but not overheating?

Smoke coming from engine but not overheating is mainly due to fluid slippage. Where fluid finds its way outside the engine, maybe when filling your gas tank or adding oil to the crankcase. This really isn’t a serious problem; the oil will burn out sooner.

However, if this occurs regularly, it may be something serious and needs attention. Driving regularly with slippage without wiping it off could destroy rubber parts due to being submerged in oil for a long. A leaky component, bad oil filter, burning electrical wires, and coolant leaks could also cause smoke coming from under the hood without overheating.

Q: Can I drive my car if it’s smoking?

Yes, you can drive your car if it’s smoking. However, it is not recommended to do so. When your car is smoking, park immediately and try to ascertain the cause of the smoke. Check the gauge and lights–a good way to know where the fault lies. You can also carry out visual inspections.

But unless you know what’s causing the smoke, don’t drive. Oil leaking onto the exhaust manifold can result in an engine misfire. So the best way is to get the vehicle to a repair shop and ascertain and fix whatever is causing the smoke. That way, your mind can be at peace when driving.

Q: Can low coolant cause smoke?

Yes, low coolant can cause smoke. Low coolant will not allow the engine to get the correct amount of coolant needed during the cooling process. Hence, this results in smoke coming from engine and overheating. Low coolant often stems from excess oil burning or leaky components.

Q: Why would smoke be coming out from my hood?

Smoke emits from the hood for several reasons. It could be fluid that had landed outside the engine or exhaust manifold due to leaks or fluid spilling accidentally. It could also point to improper fuel combustion stemming from faulty fuel injectors, pressure regulators, carburetors, etc. Excessive oil burning can also result in smoke coming out from the hood.

You can also see smoke coming from the hood of a car during rain, but this shouldn’t bother you. It’s just water that has come in contact with a hot exhaust or radiator. This also results in car smoke when you start it in the morning.

Low oil shouldn’t cause car smoke, but the issue should be why the oil is low. If the oil is low because it is seeping into the engine, then it’s an issue. If it seeps into the engine, it burns along with the fuel and creates blue smoke. The problem also stems in if there is an external oil leak and the oil is dripping onto the exhaust system, causing smoke.

Q: What does it mean when smoke is coming out from the back of my car?

Smoke from the back of your car means the exhaust is smoking. Smoke coming from the exhaust is an indication you have a blown head gasket, a faulty cylinder, or a cracked engine block that is causing the coolant to burn.

If it’s a thick white exhaust smoke, it points to a coolant leak, which could cause overheating and serious engine damage.

If grey smoke comes from the exhaust when accelerating, it’s pointing toward a bad PCV valve, excess oil, or transmission fluid leak for automatic cars.

Q: Can I drive my car if it’s smoking but not overheating?

Yes, you can; car smoking but not overheating is not always a serious issue. However, it’s better to ascertain the cause of the smoking and fix it on time. Because smoking problems can affect your oil pressure. Illumination of the oil pressure light means the oil is low; park the car, shut off the engine and fill it. If nothing changes, have your car taken to a repair shop.

Smoke coming from engine could be something serious or normal. So the best option is to carry out a proper diagnosis to ascertain the cause of the smoke.

Smoke that leaves the engine takes us in different colors and smells. What color and smell it sends makes one easily identify where the fault is.

A one-time oil spill onto the outside of the engine shouldn’t get you worried; it will burn off in a short while. If it persists, then take your car to a repair shop. You may also have run over a rubber bag burning against your cat; this isn’t a serious one.

You can even carry out a visual inspection to see what’s wrong. But the most important thing is knowing exactly what is causing the engine smoke and fixing what needs to be fixed.