Blue smoke from exhaust is not a good sign at all. Whenever a car’s exhaust starts emitting any other color of smoke different from thin white or something very light in the similitude of water vapor, it is a sign that there’s a problem.

This challenge is closely related to the car’s combustion system in the engine, and it can be detrimental if not rectified immediately.

Meanwhile, let’s check out what may be responsible for a car’s exhaust emitting blue smoke and the best possible way of fixing the issue before it gets further complicated.

What Causes Blue Smoke From Exhaust? 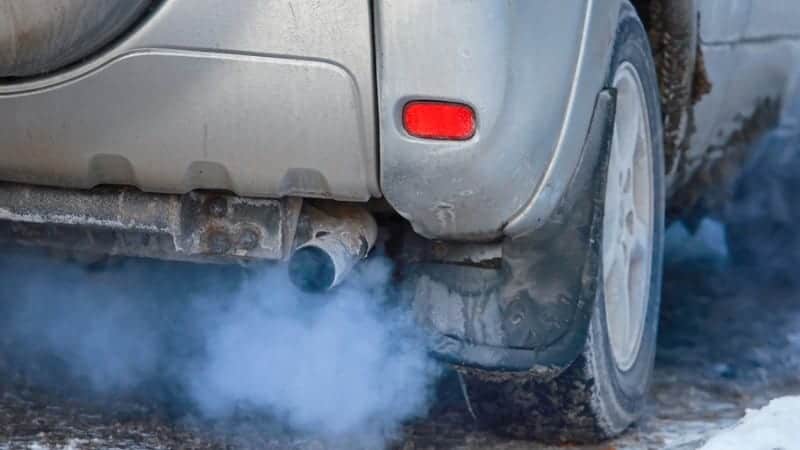 The emission of blue smoke from a car’s exhaust means a mixture of oil with gas within the combustion cycle and the release of incompletely burned fuel alongside the burning oil.

The mixture of oil with the gas is a result of oil leakage due to a defective gasket failing to make a proper seal. Whenever you experience this challenge, the causes are not farfetched from the following reasons below.

When a vehicle’s valve seals get dry and crack, they become ineffective in keeping the fluids intact separately from mixing.

Cracked valve seals easily lead to fluid mixtures, such that oil mixes with fuel during the combustion process. When this occurs, the by-product of the oil will burn in the combustion chamber alongside the fuel, thereby producing blue smoke from exhaust on startup.

Dripping oil onto the headers

A defective gasket could lead to oil escaping between the head and the engine block, leading to oil dripping onto the hot parts of the exhaust of the car’s drivetrain. When this happens, the exhaust will automatically emit blue smoke and produce a smelly odor.

Again, when a vehicle’s valve cover gasket or head gasket goes bad with oil dripping onto the hot areas of the engine bay, such as the headers, the oil will evaporate. Then, the evaporation would produce a massive outflow of blue smoke.

With this fault, you may experience blue smoke from exhaust when accelerating or from the hood when idling. The smoke also produces a horrible smell, hence the importance of paying attention to any odd smell perceived from your vehicle at any time.

Another reason why a car would emit blue smoke from exhaust in a diesel engine is due to bad glow plugs. When this occurs, it becomes difficult for the car’s engine to start normally. It may also lead to longer cranking time.

In order to diagnose this problem, connect a test light of 12 Volt to the car battery’s positive terminal, and connect the wire to each of the glow plugs one after the other. Then, check to see whether they read or not.

Read Also: White Smoke from Exhaust Reasons and How to Fix it

How To Fix Blue Smoke From Exhaust

Would you rather fix the problem that causes your car’s exhaust to emit blue smoke or risk further damage to the engine?

It is always cheaper to rectify problems at their initial stage. Ensure to follow these recommendations to fix the fault responsible for the blue smoke produced by your car’s exhaust. 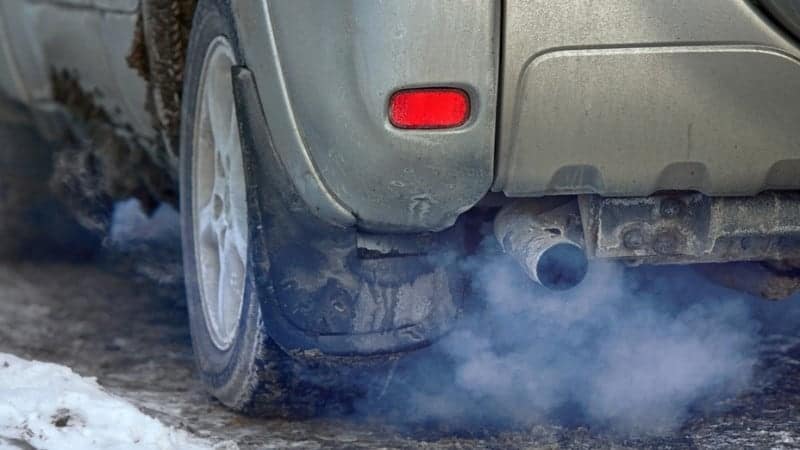 When a car’s exhaust starts to emit blue smoke, the oil leakage that is responsible may be due to excess oil. In this case, ensure to drain out the extra oil leaking out of its place.

Once this is done, check to see whether the exhaust still produces blue smoke. If it does, it could be that the head gasket, valve seals, PCV valve, piston rings, or glow plugs (especially in a diesel engine) are defective. In that case, the next option will help fix the problem.

Replace the bad valve seal or any other faulty parts

Since it is evident that a faulty valve seal, head gasket, PCV valve, piston rings, or glow plugs may be culprits to a car’s exhaust emission of blue smoke, then any of these faulty parts should be replaced.

If the problem is with the valve seal, it would cost around $40 to get the part. You would also need a wrench, and the part may cost approximately $80. Then, you could budget anything around $300 or more for labor costs.

The total cost may be pretty expensive but cannot be compared to replacing a car’s engine. Meanwhile, if the challenge is with the piston rings, you may likely have to opt for an engine replacement. Replacing this component can cost anywhere around $2,500 or more.

In any case, ensure to consult an expert mechanic to check the exact faulty part that needs to be replaced and get it done immediately.

Of course, blue smoke produced from a car’s exhaust is a bad occurrence; hence, it must be fixed as soon as possible to avoid complications. In some cases with petrol cars, that symptom may be due to oil leakage into the engine block where the fuel mixes with the air.

Meanwhile, when blue smoke is released from the exhaust in vehicles with a diesel-powered engine, it is usually due to excess oil in the car’s engine.

It isn’t a pleasant experience, especially with the horrible smell from the smoke. This is also not a good sign, and it should be fixed as soon as it is seen to avoid further damage to the car’s engine.

A blown head gasket will always be exposed by blue smoke coming from a car’s exhaust. This is usually due to oil leakage from the vehicle’s gasket.

If you experience blue smoke from exhaust on cold start or at any other time, endeavor to consult a professional auto mechanic to check out the problem and get it fixed as soon as possible to avoid further damages.

Q: How much does it cost to fix blue smoke from exhaust?

Once you notice that your car’s exhaust produces blue smoke, it would be best to fix it immediately. The cost of fixing the problem is not very expensive compared to replacing a car’s engine. So, it would be better to rectify the issue than risk complete engine damage.

The estimated cost will be around $80 for the part and somewhere around $300 for labor. However, this is just an estimated cost. Depending on your location, the car parts dealer, and the mechanic fixing the problem, it could be a little less or more.

Low oil may not necessarily cause blue smoke to be produced from a car’s exhaust. However, when blue smoke consistently comes out from a vehicle’s exhaust, it is a sign of oil leakage into the vehicle’s engine block, and this may result in a low oil level.

So, if your car’s engine oil is low, try to get a refill as soon as possible. Meanwhile, if the vehicle constantly produces blue smoke from the exhaust, your car may continually experience an oil shortage. So, endeavor to fix any issue that may result in further complications.

Q: What color should exhaust smoke be?

A vehicle’s exhaust smoke is expected to be thin white or very light. The smoke is usually similar to water vapor. The experience is common during cold seasons, especially when you start the car for the first time, probably in the morning.

Any color of smoke other than the specified above may be due to one or more faults within the engine compartment.

If you ever experience a change in your car’s exhaust smoke, endeavor to contact an expert auto mechanic to figure out what the problem is and to fix it as soon as possible.

Q: Can a bad EGR valve cause blue smoke?

Yes, a bad exhaust gas recirculation (EGR) valve can cause blue smoke to be produced from a car’s exhaust. Sometimes the EGR system may be clogged up, and at other times, it may stick open, thereby allowing spent gases from the exhaust to enter the combustion system.

When the spent gases get into the combustion system, it alters the combustion process and produces blue smoke from the car’s exhaust. It can also lead to rough idling and engine management light (EML) warning display.

Q: Can a bad O2 sensor cause blue smoke?

The O2 sensor is responsible for detecting the level of oxygen in a vehicle’s exhaust gases, thereby sending a signal to the vehicle’s engine management computer.

Once the signal is sent, the computer directs the carburetor or the fuel injection system to alter the amount of fuel released into the vehicle’s intake system. Under normal working conditions, the vehicle’s exhaust cannot produce blue smoke.

It is obvious that the reason why a car’s exhaust may produce blue smoke is due to the burning of leaking oil in the car’s engine block. Using synthetic oil seems to be the solution to the constant outflow of such blue smoke from the car’s exhaust.

If you constantly experience your car’s exhaust producing blue smoke, it may be time to switch to synthetic oil to stop the smoke. You may have to check out a dealer with quality synthetic oil for this purpose.

No matter what you do, treat blue smoke from exhaust like you would treat any other emergency. Any further complication within the vehicle’s engine may be very costly to fix. So, endeavor to fix the issue as soon as it is discovered.

Meanwhile, ensure to do all that you can to avoid this situation by using the recommended oil for your vehicle based on the manufacturer’s recommendation. Also, ensure to avoid filling excessive oil whenever you need to top it off.