Rocker arms, just like other engine parts contribute to the overall functionality of the engine. If anything goes wrong with even one rocker arm, your car won’t run well. In some cases, won’t run at all. You probably might not know something is wrong with them until you start hearing unusual noises.

So, if you start hearing weird noises from your valvetrain or engine, check it out. They are likely to be the symptoms of a bad rocker arm. Rocker arms can last for a very long time. But if not cared for, they wear off and affect the engine.

So, knowing when they are bad and getting them fixed is crucial.  In this article, I will walk you through what rocker arms are, what they do and how to know they are faulty. After which you will learn their repair and replacement cost. But first, what is a rocker arm?

What Is Rocker Arm?

A Rocker arm is a small button in a car’s engine that helps turn radial movement into linear movement. Better explained, it helps in turning spin movement from the camshaft into an up-down movement. This movement further helps in opening and closing the valves.

It can be used in the internal combustion engine of motorcycles, automotive, and other flying machines. There are several rocker arms in a car’s engine. And they work in conjunction with each other. So most times, when one rocker arm is faulty, it affects the others.

Rocker arms are made of aluminum. So you will find them at the engine head that connects the camshaft to the valves. However, you may look and not see if you’re not careful. This is because you won’t find them in the same places in all cars.

Rocker arms function together with other parts, like the camshaft, pushrods, nuts, etc. This happens to ensures that the engine runs smoothly. They come in various designs. So, how they work or how long you can use them, depends on their designs. 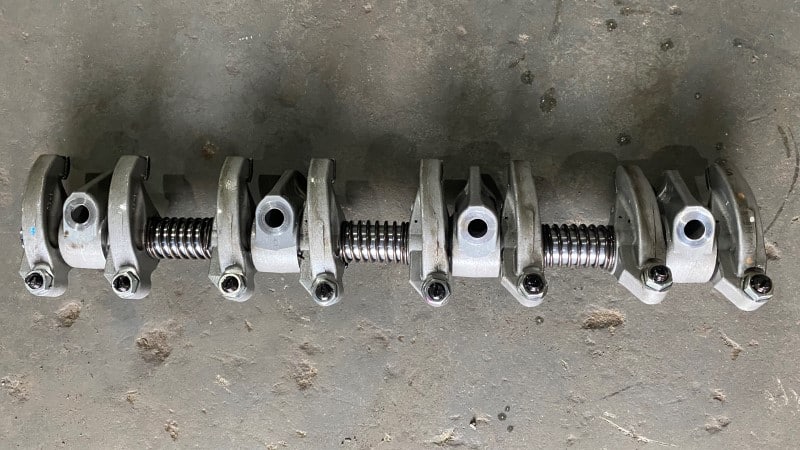 What Does Rocker Arm Do?

They help in lifting the valves for air to enter and leave the combustion chamber anytime. In other words, they help to transfer movement equivalently from the pushrods to the valves. Simply put, they are used in controlling engine valves and camshafts.

Now, if these valves do not work well, it will make gas consumption high. What does this mean? It simply means your gas will run out quickly and you will spend money to fill it again.

The rocker arms also keep engine pressure at the proper level and ensure that ignition happens at the right time. This helps to avoid engine misfire or overheat.

Does it seem like the functions of the rocker arms are not much? Then wait until they are faulty. Your car’s overall performance will not just be limited. But it might also cause permanent damage to your engine.

Because rocker arms are made of aluminum, they are strong. Hence, they have enough force needed to open and close engine valves.

So you see how important rocker arms are to the engine performance?

When your rocker arm is bad, you may start experiencing one or more of these signs.

A tapping noise like that of a sewing machine is an indication that one or more rocker arm is bad. Bad rocker arm sound is heard mostly when you start the engine or while trying to stop your car. However, other factors could cause these noises. For example, a bad camshaft, bent valves, or inadequate lubrication of the engine can also cause such noises.

When a rocker arm is faulty, it gets stuck. So because of this, the valves do not open and close well.

First thing first, identify which part of the engine the noise is coming from. Then check it out yourself or have an expert mechanic do it. This will help diagnose if the problem is from your rocker arm or other engine parts. The earlier you identify a bad rocker arm, the better. This is because as one goes bad, it spreads to affect others. Trust me, you do not want to change several rocker arms, as replacing them might be very expensive depending on your engine.

The rocker arm and drivetrain are what generate and supply power to the wheels. If they are faulty, there will be a problem supplying this power. So with time, the engine becomes weak and would not function normally.

Again, the rocker arms push the valves at a specific time to allow the inflow and outflow of air. If they are faulty, the valves will not be able to open and close at the right time. This late action weakens the engine and makes it perform poorly.

If your rocker arms are faulty, your engine will keep jerking at intervals as you drive. With time, when the rocker arms can’t function anymore, it will lead to engine knocking out.

The engine check light is a malfunction indicator light. When it is on, it means that something is wrong. So, if your engine is performing poorly, you will get a warning from the engine check light. Other things like a bad oxygen sensor, bad gas cover, faulty spark plugs, etc, can cause it. But a bad rocker arm is among the many things that can cause this light to turn on.

If you see some of those symptoms above playing out, then it’s time to inspect. If you can’t, you can have a professional mechanic inspect it for you.

To be very sure that the rocker arms are bad, compare all the rocker arms. All of them should look the same. If you notice any arm having a tear or symptoms of tear, quickly replace them. In turn, these bad rocker arms affect the engine.

How to Fix A Rocker Arm

You can fix a rocker arm yourself or have a professional do it. To do this, first, remove the faulty rocker arm. Then, replace it with a new one. But before you start, ensure that your tools box and work light are close by.

Q: What Does A Loose Rocker Arm mean?

This could be from the manufacturer’s end or you trying to adjust rocker arms at certain times. Other causes could be a bad valve seat or faulty valve springs.

A loose rocker arm noise is also like a sewing machine ticking and clicking rapidly.  So whenever you hear that sound, it may be that you have a loose or a bad rocker arm.

Q: How Do You Tighten Rocker Arms?

To tighten your loosed rocker arms, simply do the following?

You may need to get new nuts because nuts tightened and loosened over and over would not be able to hold properly.

Q: What Are The Various Designs Of A Rocker Arm?

There are different types of rocker arms specially designed for specific vehicles. Their durability and friction levels make them different from each other. But what makes each special is the way they move a car’s camshaft. Please note that not all rocker arm fits all engines. So ensure you use the one recommended for your engine.

Q: How Long Can You Drive With A Bad Rocker Arm?

Q: How Much Does A Rocker Arm Repair Cost?

Rocker arms repair costs between $500 – $1500. And almost all the money mentioned here goes into labor. Normally, the price of a rocker arm is around $5 – $20. But that’s not the only thing needed to repair it

For example, there are some gaskets you will need to remove in other to access the faulty rocker arm. So you will end up replacing all the gaskets connected to it. In other cases, you may drain out oils which cause money to replace.

However, do not try doing it yourself because of the expensive labor cost. This process requires technical know-how. So give it to an expert to do.

The most common symptom of a bad rocker arm is the tapping sounds coming from the engine. However, try to take note of other symptoms like the engine check light. And ensure you replace the bad rocker arm immediately. A bad rocker arm would not just obstruct the functionality of the valves and lower the engine’s performance. But you may also experience engine starting problems.

The process of replacing a faulty rocker arm is technical. So using an expert to do it might be a wise thing to do. Making mistakes while fixing them yourself may rise to worse problems.