Tesla is the best electric car brand in the EV market. It comes with only a steering wheel, pedals, and a 17-inch screen. The screen eliminates the need for several buttons and knobs on the ICE vehicle dashboard.

The radio, the AC, climate control, and every other system on traditional cars’ dashboards are configured inside the 17-screen. So you don’t need a gear selector.

This is one feature that is driving EV enthusiasts to Tesla brands. In addition, Tesla provides technologies for a seamless driving experience, exceeding customers’ expectations.

This article will discuss why is Tesla’s screen black while driving and how to fix it. This guide will cover all the four models on the market.

Read Also: How Long Does An Electric Car Battery Last 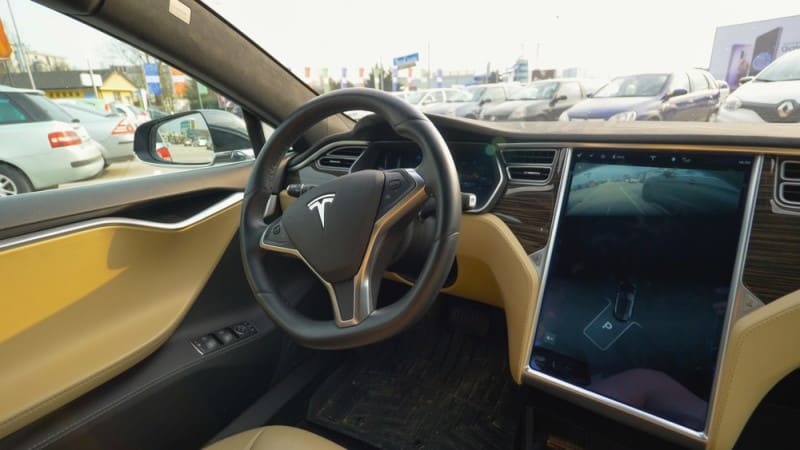 What Cause Tesla Screen Black While Driving

A few factors could cause the turning of a Tesla screen to black on models X, Y, S, and 3. Let’s examine these causes and what you should do when you find yourself in this situation.

If your Tesla model 3 blacks while driving, you’re in serious trouble. The screen is like an intermediary between you and the vehicle. In other words, it is the brain of the vehicle.

Anything that controls the gear selector, defogging of the windshield, entertainment, and navigation should always work as they should. If any of these systems go bad, fix it immediately.

Here are the common reasons for a tesla main screen to be black or blank while driving.

How long the screen will remain black depends on the severity of the culprit. The most severe among them is the eMMC failure.

A report says the cause of this malfunction lies in the embedded Multi-Media-Card memory. This malfunction is common on Tesla models built before 2018. If you have a late model Tesla S, I’ve good news. Tesla acknowledged these issues and opted to do free repairs on a black screen issues if your tesla electric car falls under these categories.

A common reason why your model y screen blank while driving is system overload. This happens when too many applications run on the car computer for the touchscreen to handle.

Regardless of the technology, the system is built on; it can fail over time. Even your phones and computer systems can lag when heavy with too many applications.

Your tesla screen is no exception. You may think Tesla is built on strong technology, so you can throw anything at it.

So, should you stop playing your favorite Shopify music? No. Instead, always check for any system updates and upgrade to newer software. This will serve as preventive measures and may help correct the underlying issues.

Read Also: Hydrogen Vs. Electric Cars: Which Is the Future? 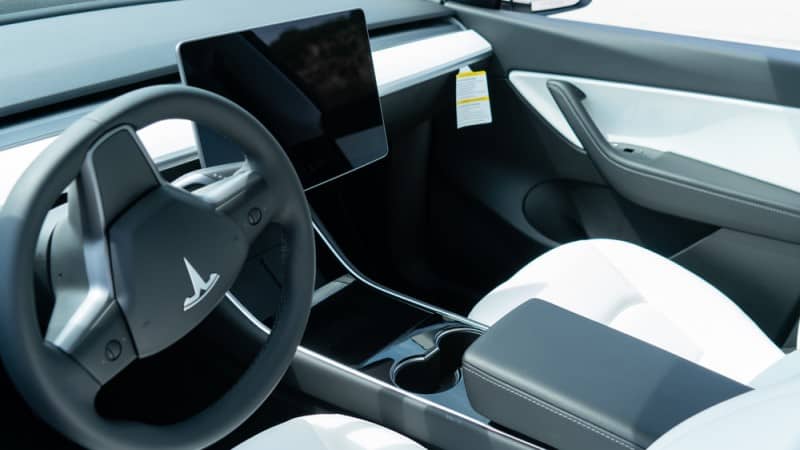 What Do You Do When Your Tesla Screen Goes Black?

Now that we’ve seen the causes of black screens on Tesla cars, what should you do when you find yourself in this situation?

The first thing you need to do is check if the malfunction is from an eMMC failure.

If your Tesla screen blacks after the update or you experience this malfunction at random, check if your car is less than eight years old, is built before 2018, and has not covered up to 100,000 miles.

If you fall into these categories, reach out to your dealership. Even if you have replaced the memory card, try reaching out to them. They may reimburse you.

If you didn’t fall into those categories above, try rebooting the touchscreen. Most times, this is all you need to get the screen functioning in due time. However, sometimes, you may need to fix the screen. For example, the component could damage because of a bad mechanical component.

Like other Tesla models, models X and 3 touchscreen house several important features on the vehicle. Therefore, you need to ensure the screen works at all times. If your screen is already malfunctioning, then you need to reset it. Here’s how to reset Tesla screen black on models x and 3.

If you have a Tesla black screen on model 3, the screen is frozen or underperforming (not allowing music streaming or connecting to your phone); you need to refresh the system. Rebooting the GPU and CPU will offer a deep system refresh to restore the systems to their normal operation.

Read More: How Long Does It Take To Charge An Electric Car?

How Do You Fix A Tesla Screen?

Rebooting the CPU and GPU is one common way to fix a Tesla screen. However, if you try it and nothing happens, you need to go the ‘hard reset’ route.

Follow the simplified steps below to run a hard reset.

Safety Highlights: If you’re not confident enough to touch your EV components, please don’t do it. Always be careful when dealing with your hybrid cars and electric vehicle’s underhood components.

Lastly, contact your dealership if both the CPU and GPU reset and hard reset do not fix the problem. They have premium equipment to diagnose the fault and fix it.

Always contact Tesla directly. Don’t visit mechanic garages. They may not be well-trained and have the required tools to diagnose your Tesla.

Q: Can you reset Tesla screen while driving?

Of course, you can reset your Tesla screen while driving, but I don’t recommend it. Instead, you can pull over and park your vehicle in a safe spot before running the system reset.

If you decide to reset the screen while cruising down the road, the system functionalities will remain the same as the reset is loading.

Here’s why I don’t recommend resetting while driving. All the system operations will maintain the previous setting throughout the resetting cycle. In other words, you can’t use other systems.

For instance, you can’t turn on the headlamp if it was off before the reset. Again, safety warnings, backup cameras, and status displays will not be available during the system reset.

Q: How do you make a Tesla screen black?

You can make your Tesla screen black by turning it into dark mode. Usually, dark mode is suitable for night driving. However, depending on your preferences, you can switch your screen too dark mode whenever you’re driving at night or set it to auto mode.

Locate the setting button to make your Tesla screen black or switch it to auto mode. It is the extreme left button on the touchscreen. Click on it, and the screen will display another menu. Then click on display. You’ll see the light, dark, and auto modes. Click on the dark mode to switch the tesla screen to black.

Q: How do you soft reboot a tesla?

Soft rebooting a Tesla means restarting the system while some essential functions are still running in the background. You can call it smart device rebooting.

This allows the driver to restart the Tesla software while the electrical and electronics systems function without the screen. Soft reboot in Tesla is divided into two. First, we have the screen reset and the full vehicle reset.

To soft reboot, press the scrolls on the Tesla steering wheels until the main screen goes dark. Then, release the scrolls. The touchscreen will come up within 10 seconds. However, Tesla recommends waiting for 30 seconds before driving the vehicle.

Q: Can you drive a Tesla without the screen?

Tesla screen controls various essential features and operations. So, this question may seem tricky to answer. However, according to the DÆrik YouTube channel footage, you can drive a Tesla with the touchscreen completely removed.

While this may seem crazy, it is quite possible. In the video, they confirmed you could run without a Tesla screen on their model 3. However, DÆrik Warn, you should not try it at home. Driving without the screen means driving without knowing the speed you’re traveling on.

Q: Does Tesla have a night mode?

Tesla touchscreens have three different modes. They have light, dark, and auto modes. The dark mode is also known as night mode. Night mode is suitable for night driving. It is like night or dark mode on your phones and computer systems.

Try rebooting or resetting the system whenever you find yourself in a ‘Tesla black screen of death’ situation. A common reset could be all you need to get the system alive again. However, contact your service provider if it doesn’t rectify the malfunction.