For most experienced drivers, the timing belt and tensioner seem pretty hard to inspect without completely taking them out. Thus, it would help if you know a few symptoms of a bad timing belt tensioner. These signs often include weird noises that indicate whether the belts are starting to crack or appear worn.

It would interest you to know that the camshaft and crankshaft of vehicles can only have that perfect synchronization when the timing belt moves consistently. Again, there is a need for the valve function to sync with the intake and exhaust strokes of the car’s engine cylinders.

Thus, the timing belt tensioner plays a significant role for this to happen and should be in good condition. Why does this seem so? There may be some serious damage if the timing belt breaks, which can often result from a bad tensioner. But, a few bad belt tensioner symptoms can help you detect the problem on time and save some cost.

What you Should Know about a Timing Belt Tensioner

A close look at the timing belt tensioner reveals that it consists of four main parts:

Everything pulls tightly with the aid of the spring. The timing belt makes its necessary movements and adjustments with the help of the tensioner arm. The pulley also comes in handy to aid the movement of the belt, while the base bears these three components.

For experienced car owners, you can attest to the fact that the timing belt barely goes bad unless it seems pretty old. Nevertheless, there is often more report of the tensioner having problems and separating from the timing belt.

The lifespan of the tensioner varies based on the use of your car, and it doesn’t appear to be specific. However, if you find yourself replacing the timing belt, you need to get the tensioner replaced. 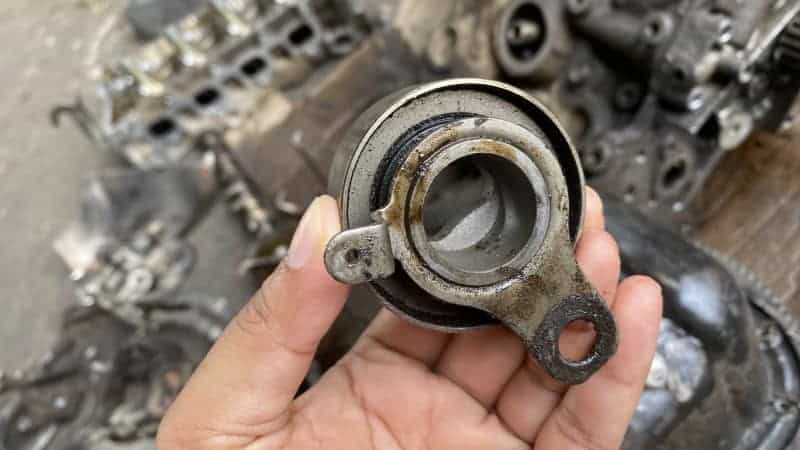 Is it safe driving with a bad belt tensioner?

Since the tensioner works well in creating enough tension power for its accessories, it doesn’t appear safe to drive with one that seems faulty. Doing so would make the timing belt slip off, creating weird noises and leading to excessive heat.

Remember, the timing belt cover is responsible for keeping the tensioner at a place. So, if you listen closely, you would hear a slapping tapping sound that seems different from the normal sound that comes from the engine.

If you start hearing a chirping sound, the tensioner’s pulley is bad. You would know that the tensioner is at its last point when the sound becomes a “squeal.” Such squealing sound would mean a total failure of the tensioner and would require instant action to fix it.

If the timing belt does not grip the pulleys firmly, you may soon start hearing a rattling sound as the pulley grinds. With a bad bearing, the sound becomes repetitive, letting you know that there is a serious issue that you should fix.

The check engine light turns on when there is an engine problem, signifying that the vehicle’s engine is not working at its optimum. You would see the light on the dashboard if the timing belt goes loose due to a bad tensioner.

At this point, the timing valve would go off, causing the light to on. However, there are other issues that can cause the check engine light to go on; hence, the need for further diagnosis. Interestingly, you can narrow down the problem using the OBD2 scanner.

Such diagnostic tool reveals codes that tell you the kind of problem the engine is facing, making it easier to fix. Mechanics use the OBD2 scanner frequently, and it can tell you if the check light is on due to a timing belt problem.

Do you find your vehicle’s starter motor engaging, but the engine won’t start? Well, this problem could be due to a bad tensioner. Kindly note that a failed tensioner would make the timing belt seem too loose to grip the gears.

Again, the pistons would not rise, preventing the engine from functioning as it ought to. You should quickly get the car to the mechanic if you notice this sign. You cannot drive to the car service station; hence, you may need a towing service.

The car’s engine misfires due to various reasons, and a bad tensioner is one of them. If the valve opens and closes at the wrong time in contrast to the rising and falling time of the pistons, the engine misfires.

When such an incident occurs, the fuel-air mixture’s combustion cannot occur within the cylinder, causing a misfire. This problem is one that you shouldn’t take lightly, as it could cause serious damage to the car’s engine.

With time, the engine’s performance starts reducing, leading to reduced acceleration. Then, you may start noticing poor gas mileage and reduced overall performance of the vehicle. Thus, it would help if you fix the problem as quickly as you can. 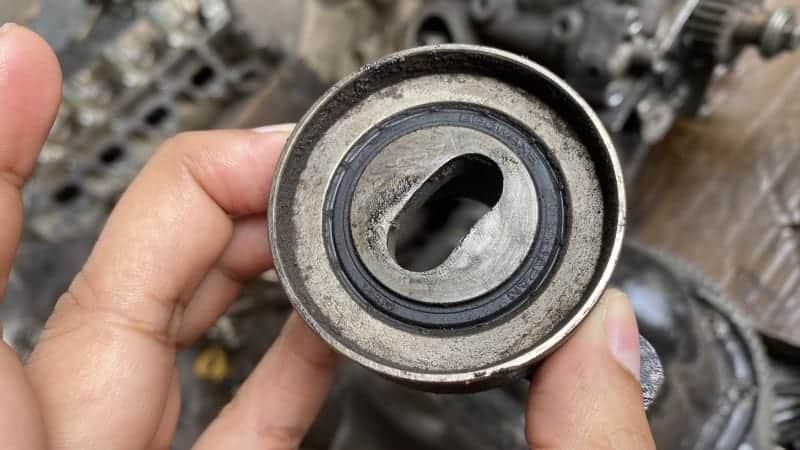 How Do You Test a Timing Belt Tensioner?

Replacing a timing belt tensioner is a complex job that requires removing the front engine cover. It also drops an expensive repair bill on the table if done in a mechanic shop. Most times, the fault is a bad tensioner and not the belt. A bad tensioner can break a timing belt and cause catastrophic damages to related components.

Here’s a simplified procedure on how to test a timing belt tensioner;

A bad timing belt tensioner will give strange noise emitting from the timing cover area. It could be a rattling or squealing noise. A loose timing belt will cause drivability issues under high revolution per minute (RPM) or high load. If a timing belt is not timed in the manufacturer’s specified sync, it will cause loss of engine power, engine misfiring, and hard engine starting.

Step 2: Try to distinguish where the noise is coming from

Step 3: Remove the drive belts and start the engine

Remove the drive belt and turn on the vehicle. See if the noise will stop. If it stops, chances are, you have a worn drive belt tensioner or bad serpentine belt and not a timing belt or tensioner issue.

If that’s not the case, proceed to the next step.

Remove the accessories on the front of the engine to access the timing cover. Lose the bolts holding the cover and take it off. The normal timing belt tensioner should have a small slack, but not much.

Step 5: Take off the timing belt

If you detect a faulty tensioner, replace it and time the engine to the manufacturer’s specified sync. You can consider getting a complete timing belt kit and replacing the belt, tensioner, and idler pulleys.

Kindly note that the cost varies depending on the car’s make, year, and model. So, you may need to check with the auto care service station near you. The cost of replacing the timing belt and tensioner seems pretty high due to the work involved.

It requires an experienced mechanic to fix such, as there is a need to get deep into the vehicle’s engine to get hold of the timing belt. If you feel confident enough to fix such a problem after noticing some symptoms of an over-tightened timing belt or one that feels loose, you can search for a few DIY videos.

Due to the difficulties associated with this car part, it is recommendable to replace the tensioner and even the water pump whenever you get the timing belt replaced. Since all these parts have the same location, why not get all three replaced at once? Doing so would save you the heartache of returning the car to the mechanic to fix the issue independently.

Q: Can I drive with a bad timing belt tensioner?

It is unsafe for one to drive with a failing timing belt tensioner, as it does not supply sufficient tension. With that, the belt can slip off easily and starts generating excessive heat that decreases the performance of its accessories.

If you keep driving and ignore the common symptoms that follow a bad tensioner, the timing belt would wear completely. Again, there could be a complete engine failure and an overall reduced performance of the car.

Q: How do I know if my tensioner pulley bearing is bad?

In extreme cases, the vehicle’s engine won’t start even though the starter motor engages. Again, you may notice the belt wearing out unusually if you inspect it, and other accessories that rotate with the help of the belt may soon fail.

Q: What does a bad timing belt tensioner sound like?

A bad timing belt tensioner noise is a noticeable symptom that starts like a whining sound within the car’s engine. You would hear a knocking sound if the timing belt goes loose due to a bad tensioner since the connected parts would start hitting the belt cover.

If you can hear a chirping sound, the tensioner’s pulley is bad. Then, a squealing sound would mean a total failure of the tensioner and would require instant action to fix it. Thus, try to listen carefully and detect the problem.

Q: Can a bad tensioner cause engine vibration?

A bad tensioner and worn timing belt can cause an engine to start vibrating, and as such, there is a need to get rid of such. With the tensioner failing, parts connected to the belt would not move at the required speed.

Hence, the cause of the vibration within the engine. An engine vibration often occurs from faulty spark plugs that prevent the ignition of the fuel in the combustion chamber. Still, ensure you look out for a bad tensioner.

Driving with a failing tensioner doesn’t appear safe, and as such, you should not ignore the common symptoms of bad timing tensioner. When you notice these signs, it would help if you test the tensioner for further diagnosis. If there is a need, take the car to an expert to replace the failing tensioner and worn-out belt.