If you have owned a modern car for a few years, there are chances that you’ve seen an FCW system failed messages on your instrument cluster. FCW system is available in many modern cars. It is a safety mechanism that helps to reduce the rate of frontal collisions.

Since the FCW system is a crucial safety feature that minimizes accidents, what if it fails? Is it dangerous? Will it lead to an accident?

We’ve heard several reports of an FCW system failed on Honda Accord and other Honda models. In fact, FCW system issues are prevalent on Honda Crosstour, Honda Odyssey, and Honda Accord.

Let’s discuss more on how this system works, what it is, what the light means on the dashboard, and how to clean the FCW sensor. So, grab a seat and a cup of coffee.

What Is FCW System?

FCW system is a crucial safety feature that monitors the road ahead of the driver with car sensors. It looks for obstacles like road blocks, other immovable obstacles, other cars, and even passersby.

The FCW system calculates the speed of your car and determines how close you are to moving or immovable objects. If your vehicle gets too close to any obstacle where you may efficiently use the emergency brakes, the system will notify you of a probable collision.

Studies have proven that the FCW feature brings down the rate of rear-end collisions by 27%. Some newer cars have automatic emergency braking systems and FCW systems. I’d recommend you go through your owner’s manual to see and get familiar with the safety systems in your vehicle.

Safety should always be our no.1 priority. Therefore, regardless of your vehicle’s safety features, apply all safety measures when driving. 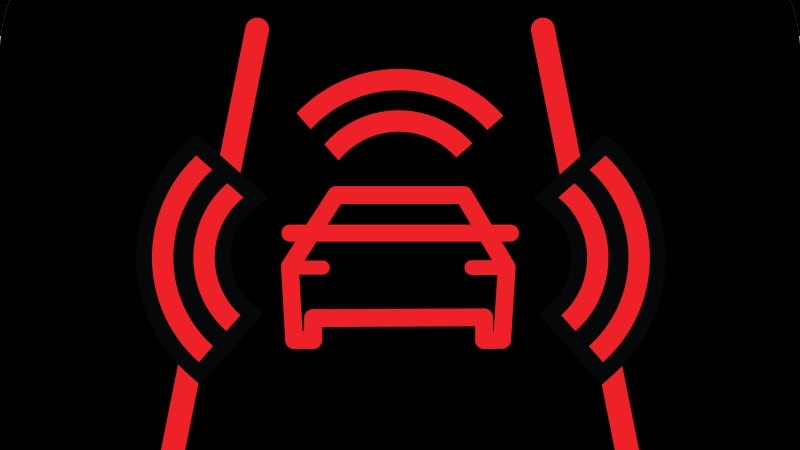 How Do FCW Systems Work?

Auto manufacturers install several safety sensors in cars like radar, lasers, and front and rear cameras to help determine and notify the driver of an impending collision. Once the FCW system determines a frontal collision, it’ll notify the driver to gear up.

The notification may come in the form of steering wheel vibration, audio alarm, or visual indication. In addition, in some vehicles (though, in rear cases), the system may engage the brakes automatically and prevent the vehicle from hitting the obstacles ahead if you do not take necessary actions.

However, you can choose how you want the FCW system to notify you of probable collisions. You can locate these options in your car’s Driver Assist System Setup menu. You can set the warning to a long, regular, or short warning distance range. I recommend leaving the system the way it is if you haven’t mastered how it works.

In any case, the FCW system can give wrong signals in extreme temperatures. So if your car displays an FCW system failed on Honda Odyssey or any model, and there’s no impending collision, you’re probably driving in bad weather.

Auto manufacturers state that the FCW system may give false signals when driving in high heat, snow, high heat, fog, or mud. If you are in this situation, locate a safe spot and park your vehicle. Then, allow the engine to cool before starting the engine and embarking on your journey.

What Does FCW Failed System Mean?

As reiterated, the FCW is a critical safety feature that notifies a driver of an imminent collision when driving at ten mph or higher. This notification helps the driver to take necessary actions to avoid hitting the obstacles ahead.

If this system fails, your vehicle won’t notify you of an imminent collision on the road. FCW system failure means your vehicle’s forward-collision warning system has malfunctioned or disengaged. If you’re involved in an accident before this happens, you need to go for a medical check-up.

In any case, this system can malfunction in extreme temperatures. The moment the FCW failure light comes up at extreme temperatures, park the vehicle in a safe place and allow the engine to cool. After that, turn on the vehicle and continue your ride. Contact your dealership to check and rectify the fault if the light persists.

How Do You Clean FCW Sensor?

Being safe when you are behind the wheels should be the priority for any driver, especially someone new to driving. Luckily, today’s cars come with cutting-edge technologies like screens, cameras, and radars to keep you safe.

And all these new technologies may seem like futuristic spy movies, but the truth is, these revolutionary innovations can be put on the fritz with just one simple thing – good old-fashioned dirt. They can leave your car filthy with salt, dirt, or snow.

So, if your car has these important safety gears like FCW, this old-fashioned dirt will not only leave your car dirty. It’ll also prevent these safety gears from functioning properly. That’s why it’s important to wash your cars regularly. But what if washing your car is not an option?

Then, you’ll have to clean the FCW sensor and other related sensors. Let’s see where these sensors are and how to clean them. Let’s start with the easy one.

The back camera: The back camera is a lens typically located above your car’s rear license plate to help you see what’s behind you on a screen from the driver’s seat. It helps you avoid backing over anything, or worse yet, anyone you can’t see behind you. To keep it clean, you only need a microfiber towel and some soapy water. Give it a quick wipe down.

Blind spot warning: This is another useful technology. It alerts you if other vehicles are near your car when you want to merge or change lanes. Blind spot warning uses radars in the rear panel of your car. Wipe it down, and you’re good.

Parking sensors: Head to the front of your car. There are likely two dots on the front bumper. Those are parking sensors. Auto manufacturers design them to prevent you from hitting anything when driving into or backing out of tight places. Give these a wipe down to prevent your vehicle from getting in a fender bender.

FCW system failed; how to fix it

FCW failure can also be a computer malfunction. For example, the system will fail if there’s a problem with the computer program supporting or managing how it works. So, the moment you see the FCW warning light, locate and park the vehicle in a safe place. After that, turn off the engine and allow it to cool.

While waiting for the engine to cool down, disconnect the negative battery terminal and leave it for around 20 minutes. This will reset the system and fix the forward collision failure. Next, if your vehicle’s windshield is covered with dirt, wipe it down with the wiper blade. If that still doesn’t fix the problem, try a system update.

Q: Where is the FCW sensor located?

The FCW location varies from vehicle to vehicle. In any case, it is usually on the front of the vehicle. This can be on the headlights, camera behind the windshield, front bumper, or grill.

However, most of the FCW sense impending obstacles with the camera behind the windscreen, and a few others works with radar. Consult your owner’s manual if you can’t locate this feature on your ride.

Q: What does FCW stand for in a Honda?

FCW stands for forwarding collision warning in Honda cars. In Honda, the FCW uses a video camera behind the windshield and radar sensors on the front bumper to monitor short-range distance. It detects obstacles ahead and notifies the driver of a probable collision.

Q: Can I drive with FCW system failed?

If an FCW system failed on a Honda Crosstour or any vehicle model, it wouldn’t stop you from driving. However, it is not safe to continue driving with a failed FCW system failure. If you choose to drive with a faulty FCW system, you need to be extra cautious.

Most vehicles have the option to select how you want the FCW to notify you. You can locate this setting by going to the vehicle settings, then to the Driver Assist or All tab, and selecting the forward collision warning. You can then choose long, normal, or short. Additionally, you can choose OFF to disable the FCW feature.

However, this process varies from vehicle to vehicle. For instance, you can switch off FCW on Honda Accord and Odyssey by holding the button on the steering wheel for about two seconds. So, if this system is off in your vehicle, there are chances that you have mistakenly turned it off.

Q: What does FCW unavailable service required to mean?

If you see ‘FCW unavailable service required’ on the instrument cluster, it means certain conditions have temporarily limited the system from functioning. Such conditions can result from poor visibility, especially when driving in the rain, snow, mud, or salty areas.

The FCW is one of the most important safety features in a car. It notifies the driver of an imminent collision when driving at ten mph or higher. If it fails, it increases the chance of getting into a collision.

You must be extremely careful when an ‘FCW system failed’ error message appears on the dash when driving. If this happens after a collision, visit a hospital for a medical check-up. Also, the error message can appear in extreme temperatures without any obstacle ahead.