As much as a car requires fuel and engine oil to run, the importance of a car coolant cannot be ignored. A car engine is bound to heat up due to internal combustion, different mechanical parts movement, electric coil generating current, and air conditioning unit. The external air is moving directly into the hood from the front grill or specialized Air Intake Systems that are pointed in such a way that it can absorb the maximum air and throw it off the engine to cool it down. Where the air cools down the external surface of an engine, the internal equipment of an engine’s temperature is maintained and cooled down with a coolant.

The primary purpose of the Coolant is to reduce the engine temperature in summers and increase the engine temperature in winters when driving in extreme climates. Coolant levels are meant to be healthy; however, there are several reasons for the coolant level going down. So a usual question raised by a layman is how much coolant loss is normal and what to do in order to make sure it stays within its limit? Before that, let us look into the possible causes of coolant loss.

Read Also: Car overheats when AC is on and idle [ Symptoms and Solutions]

Possible cause of coolant loss

Coolant leak causes engine overheating resulting in engine failure and ultimately costing a hefty amount of car repairs. Using the wrong type of Coolant or driving a car with a low coolant level in the reservoir, the engine is bound to overheat. Different reasons exist for a coolant leak depending on car engine condition, external conditions, driver carelessness, or faulty engine component. These are not acceptable coolant loss; however, the coolant evaporation rate can be quite minimal at times, which causes real confusion to the car caretaker. Let us try to dig into the reasons for causing coolant loss. 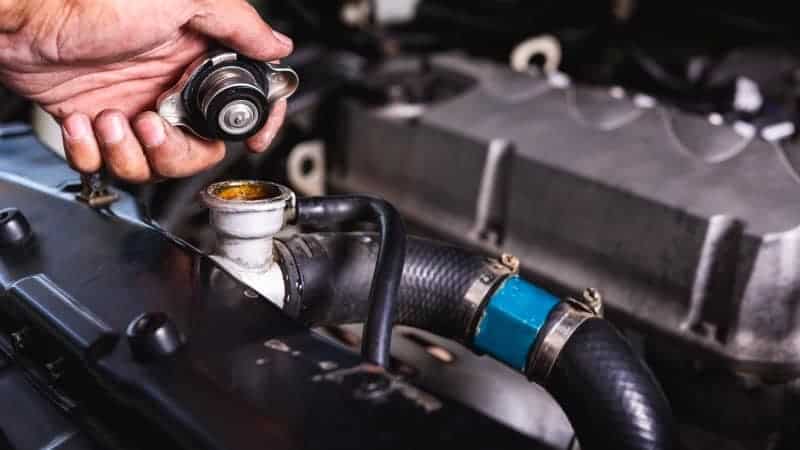 The coolant evaporation rate is quite low when the radiator cap is rusty, or the rubber is worn out. The radiator cap’s primary purpose is to maintain the coolant level and the reservoir pressure so that the Coolant can travel at the usual rate around the hose. If damaged, the Coolant tends to escape, and pressure reduces within the reservoir, causing a warning light in the dashboard. It is advised to replace the reservoir cap after a couple of years, and it needs to be checked bi-annually for rust or rubber damage.

The radiator hoses are quite close to an engine and exposed to high temperatures when the car’s engine is running. The hoses can crack or burst, causing Coolant to spill out of the system. This causes low coolant level warning, and with the continuous spillage, it will directly affect the head gasket resulting in engine malfunctioning.

Aluminum Radiator is a lightweight but practical component in managing the hot and cold coolant temperatures and maintaining the overall pressure across the engine compartment. The radiator takes much beating due to high temperatures around. Due to low-quality Coolant, using water instead of Coolant causes corrosion within the radiator walls. The corrosion results in rust, which ultimately punches holes within the radiator surface, causing a leakage.

Other than the Coolant itself, the engine has other components that are responsible for maintaining the engine temperatures. The Water Pump, thermostat housing, and radiator fan are top of the list responsible for the cooling off of the engine. The water pump’s primary purpose is to make sure the Coolant travels through the radiator, hoses, and engine block. The failure of the pump to push the Coolant to appropriate engine parts causes a series of chain events resulting in coolant loss and damaging the engine.

The thermostat housing is a coolant outlet usually located over a cylinder head or engine block. Coolant flows from the engine block to the radiator through thermostat housing. If in some cases, the Coolant stuck in a closed position with the housing, this is results in a choke-up and coolant leakage on the ground under the vehicle.

The Radiator Fan directly faces the radiator, and it might halt due to electrical motor failure resulting in radiator temperature going up, which might burst open the cap or cause radiator leakage resulting in coolant loss.

Read Also: Brake Caliper Sticking When Hot [Causes and How to Fix it] 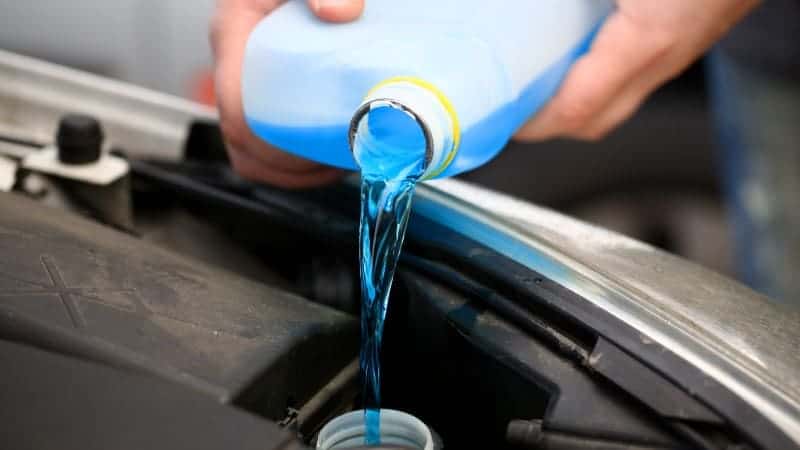 How much coolant loss is normal?

A coolant leak is bound to happen with issues within the radiator or engine, but there are chances of depleted coolant levels with no trace of leakage. A minute amount of Coolant might evaporate as it’s not a closed system entirely due to the availability of an overflow reservoir. However, with time, the Coolant flows within the engine and radiator; the chemical agents, after exposure to high temperature, lose their natural balance and get evaporated without any significant leakage. As the engine gets old, the Coolant evaporates more and more. As a usual calculation, it is found that for every year an engine passes by, the coolant level drops to 0.25″ in 4 months provided that the engine is functioning well and with no leakages or damages.

0.25″ inches quarterly makes 1 inch for every year. This evaporation of the Coolant is expected due to extreme temperatures, which turn the water element within the Coolant into steam. Due to this, it is advised to clean the radiator after a couple of years and change the Coolant alongside in order to prolong the engine’s life.

Let us cover some Common FAQ’s found all over the blogs related to Coolant. 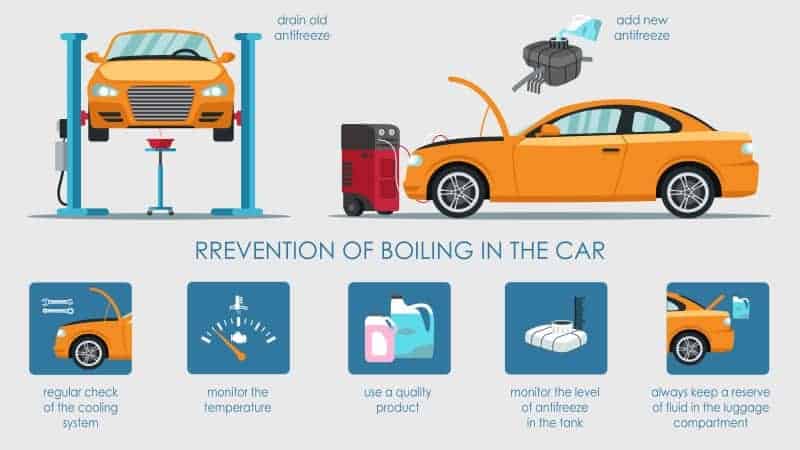 Q: Is it normal for the coolant level to drop?

Yes, due to the extreme engine temperature, the water element within the Coolant tends to evaporate, resulting in a coolant level drop. Also, due to the availability of an overflow reservoir, which makes one end of the Coolant open, tends to spill out extra Coolant or jumping Coolant out of the system.

Q: Why is my coolant low but no leaks?

Leaks are not always a reason for coolant loss. When a head gasket gets blown up, the Coolant enters the engine chamber resulting in Coolant burnt off.

Q: Why does my engine coolant keep disappearing?

It depends on what is causing Coolant to disappear. It might usually be evaporation due to the natural steaming process, engine equipment failure, disrupting of the coolant flow, a minor leakage within the radiator, cracked hoses or leaked joint of hoses that causes Coolant disappearing over time.

Q: What happens if the Coolant is below a minimum?

Get ready to spend some hard-earned bucks, if you keep on running the car with below-allowed minimum coolant level. The Coolant will keep on lowering, resulting in water pump failure as it will not be able to pump Coolant out of the radiator to the engine compartment for the sole purpose of cooling down. The pressure will increase, resulting in a chain of reactions from cracking the engine head, Coolant steaming off, gasket blowing up, and ultimately seizing the engine if precautions are not taken.

Q: How often should the Coolant be topped up?

It is suggested to check the water coolant once a month and fill it up from the external bottle if the level is below the minimum. Never open the reservoir cap if the engine is running or just switched off. If there is a minor leakage and the coolant level is regularly dropping, be sure to gauge the level on a weekly level, top it up and visit the workshop at the earliest in order to avoid any significant engine fault.

The Coolant plays a vital role in overall keeping the temperature of an engine and pressure at an optimal level. An ideal coolant is of high thermal capacity, non-toxic, avoid corrosion, low in viscosity, and density. For countries with cold temperatures, Coolants are available with anti-freezing properties that avoid the Coolant itself getting freeze due to -0 C temperatures. These properties make sure the vehicle engine runs at its full capacity along with other engine cooling equipment.

In the end, it is up to the user to either spend a small amount on buying a suitable coolant and keeping an eye on the level on a scheduled basis with a lousy quality coolant and carelessly avoiding checking the level which would result in spending a big amount of money to get the engine repaired.

There are different players in the car parts market, each trying their best to have their brand stick out. In tire manufacturing, there are Continental Tires. It is a popular brand that produces...

The right tools are awesome for fixing various problems, and Hart tools are an amazing option that you can find in the market. This product line consists of a plethora of hand, cleaning, cutting,...