A floor jack is a jack that allows you to lift one part of a vehicle when doing repairs under the vehicle. A floor jack should always be in good condition before use. It is, therefore, imperative to bleed the floor jack regularly to prevent it from sudden failures. This will happen only if you know how to bleed a floor jack. It is quite risky to use a floor jack when it has air in its system.

You rely on your jack to hold heavy loads above you when you are working below. You can imagine how unsafe it can be for the jack to fail when repairing the underhood of your vehicle. Bleeding a floor jack is not a complicated process, and any household handyman can do it. Here we shall simplify the process of bleeding a floor jack from the complex and daunting chore people think of. 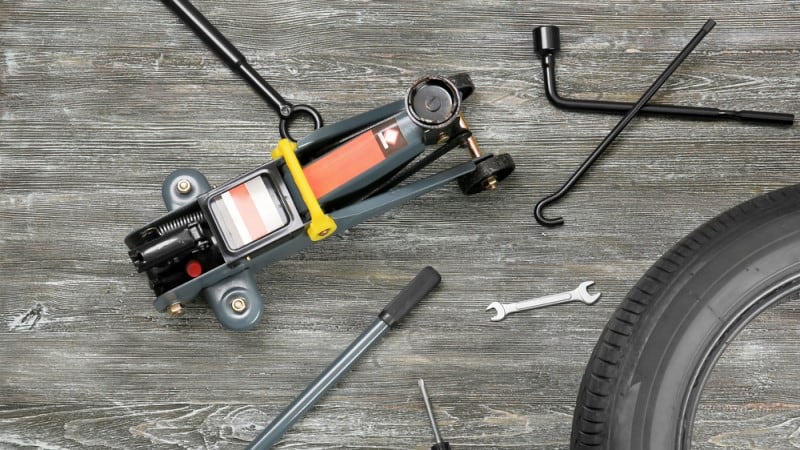 Step-by-Step Guide on How to Bleed a Floor Jack

Before you start bleeding a floor jack, there are two things you need to have. First, ensure that you have a flathead screwdriver. You can also accompany it with a star screwdriver. The other thing you should have is a hydraulic fluid. It should be strictly hydraulic fluid and not any other type of fluid.

This is because other fluids are not meant for hydraulic systems, and when used for a long time, it can result in corrosion in the system. Other types of fluids can also cause a decrease in the durability of the floor jack. Once you have the right items, follow these steps on how to bleed a hydraulic floor jack:

Read Also: Learning How to Fix a Floor Jack that Won’t Lift

Before you start bleeding a floor jack, it is crucial to prepare it for the task. Ensure that the floor jack is placed on a flat surface. Get rid of any load that may be lifting the arm of the jack. After then, clean the surface of the floor jack by wiping it with a damp cloth. This will block dirt from getting into the system of the jack when you open it.

It is important to check if it is attached somewhere before the bleeding process starts. If the jack is attached to the engine hoist, then you should remove it before you bleed.

The next thing is to open the pressure valve to release pressure. If you are using high-quality and expensive jacks, you will need to open the valve by turning the handle of the jack counterclockwise carefully. The placement of the older and cheaper models is under the handle. You will be needed to remove the handle and fit it into the release valve.

You can also make use of pliers and turn them in an anti-clockwise direction. You must wait until the arm of the jack falls back to the lowest position possible. There are also some release valves with a flat-head screwdriver fitting that you can use. When the valve has been released successfully, then you will be ready to go to the next step.

Find the filler plug and attach the flathead screwdriver and carefully turn it in an anti-clockwise direction. You will hear a short hiss when you remove the filler plug successfully. This is a confirmation that the trapped air in the floor jacks has started to escape.

The filler plug is located in Jack’s main body. The filler plug has the same appearance as the two check valves, so we are cautious not to confuse them. If you are not sure of the filler plug, consult the jack’s instruction manual to know its exact location.

When the hissing sound stops, attach the filler plug again to the jack. The release valve is closed by turning it in a clockwise direction. Later, check if the jack is short of OI, or if it will not work efficiently. If the jack does not have oil, insert hydraulic fill until it is full. If the oil is popping from the valve, then it means that the valve has oil, and you should not put more. Now you can pump the handle, and the jack will work like a new one.

After re-attaching the filler plug, go on repeating the process until you make sure there is no more air seeping out. If the floor jack is bled properly, you will not hear air seeping out. After bleeding the jack, it is safe to use.

Read Also: Great Tips on How to Repair a Floor Jack that Won’t Hold Pressure 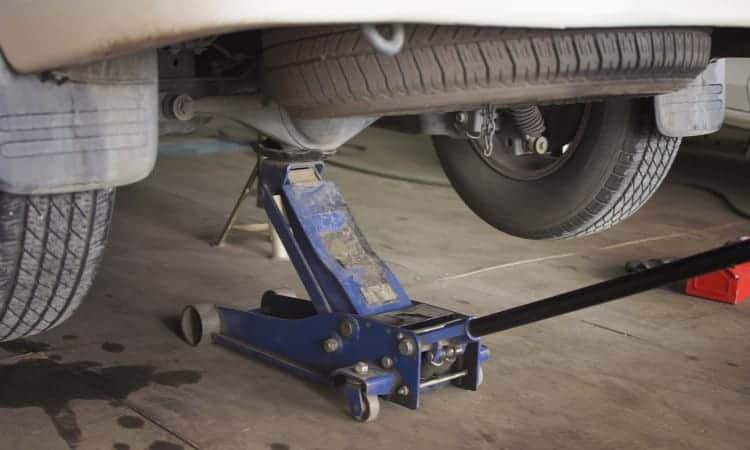 Q. How Do You Fill and Bleed a Floor Jack?

Start by opening the valve by turning the handle anti-clockwise and filling it with hydraulic jack fluid. Be careful not to use motor oil since it will compress when there is a heavy load on it. Also, do not fill it with brake fluids.

After filling the oil, close the valve by turning the handle in a clockwise direction. Pump the handle six to eight times to see if you will hear any hissing sound from the bleed plug. That hissing sound is the air that you just bled into the system.

The system is made by just a valve and a passage. Follow the process again until there is no more air coming from the bleed plug opening. With that, you will have finished bleeding the floor jack successfully.

Q. How Do You Bleed Air From a Hydraulic Jack?

If the floor jack won’t raise or if it gets jerky, it means that there is still air in the system. Follow the steps again till there is no more air coming out from the bleed plug opening. Once you have finished bleeding, place the cover plate back in its position.

Q. What Kind Of Fluid Do You Put On a Floor, Jack?

Any type of standard hydraulic oil should work perfectly for a floor jack. Ensure that the oil is of suitable viscosity. One thing one needs to be cautious of is that some hydraulic jacks that are made for automotive services use brake fluids. These are jacks of around the 1980s and before. The hydraulic jacks of this period mainly featured decal-type labels that either stated “Do Not use ATF” or “ATF ONLY.”

Q. How Do You Add Oil To a Floor Jack?

Another common question among people is how to fill a hydraulic jack with oil. When filling a floor jack with oil, start by positioning the jack on level and flat ground. Open the release valve by turning it in an anti-clockwise direction. If your floor jack has a cover plate, remove it and wipe it around the filler port plug. The filler port is the place where you will be pouring the oil.

Cleaning it will prevent the oil from getting contaminated. Remove the filler plug, which is commonly found under the cover plate. Followed by filling the reservoir with hydraulic oil until it is slightly below the fill whole’s lower rim. After that, wipe the excess oil on the rim and replace the plug.

Read Also: Bottle Jack vs. Floor Jack: Which one is Suitable For You?

Knowing how to bleed a floor jack is important, and it will save you money and time. Bleeding is a very important process for a floor jack if you want it to keep on performing effectively and safely. The question of how often you should bleed your jack depends on how often use the floor jack.

Ideally, it should be after every six months. To maintain the floor jack, clean it often, ensure it is free from debris, inspect it regularly, and do not use the wrong type of vehicle on it. Regularly bleeding the floor jack will also prolong its life.