Would you love your car engine to stay for long? Are you tired of having your car break down each and every time? If yes, then this Marvel Mystery Oil review gives you the secret. Some of the major things that make engines lose power and eventually crackdown are carbon deposits, internal clogging, and corrosion. The solution to avoiding the side effects of fuel combustion is by using Marvel Mystery Oil.

Marvel Mystery Oil is a fuel additive that increases the life span of your vehicle’s engine. This oil prevents bad gas millage by eliminating and dissolving fuel residues in fuel injectors and carburetors and lubricating and cleaning pistons, intake valves, and cylinders. Adding the Marvel Mystery oil regularly reduces the risks caused by bad mileage and prevents the engine of your car from common engine failure. Let us learn more about this oil in the below Marvel Mystery Oil.

Brute Pierce formulated Marvel Mystery Oil was shortly after the first World War. Burt was popular for his “Marvel Carburetor invention which later became the standard carburetor during this time. His inventions were motivated when the carburetors for aircraft and automobiles in Marvel Carburetor Company started getting clogging problems.

This pushed Brute to develop a formula to maintain the clogging jets. Pierces work rights were later bought by GM, and they hired him as their consultant. During his stay in GM, Burt cooked up a mixture of different chemicals and light oils to clean lead build-up and sludge in carburetors. Pierce left GM in 1923 and incorporated his work as Marvel oil.

He then started selling chemicals and light oils under the name Mystery Oil as universal cleaners and lubricants. That is how Marvel Mystery oil came to being. Marvel Company was at first based in Chicago. The company later moved to New York City and then to Port Chester, NY in 1941. Marvel oil became more popular as an effective way of treating all ailments in engines.

In World War II, this oil was used in all types of engines from ranks, to battleships to airplanes. The company later moves back to its roots in Chicago in 1999. Pierce Brute refused to disclose the formula of the oil and answered the question on the makeup as “It’s a Mystery”. That is where the name Marvel Mystery came from. Up to date, this oil is known for its mysterious ways of preventing and curing engine ailments.

What is Marvel Mystery Oil?

Marvel Mystery is a light viscosity oil almost equivalent to SAE 3W. It contains 790 PPM phosphorous additive, wintergreen for smell, dye and 20% solvent, among other things. Marvel Mystery is an oil additive, made to be used in fuel lines or engines. It was initially advertised to be a fuel additive for all types of engines.

This petroleum-based product is available from 16 ounces to 55-gallon containers depending on the users’ needs. You can use this additive together with either full-synthetic or synthetic blend oil products. The oil additive can be used in diesel and gasoline engines.

This lubricating oil by Marvel Mystery is safe for oxygen sensors and catalytic converters. When you add it in gas, it helps in improving gasoline mileage, lubricating and cleaning carburetors and fuel injectors, and also preventing and reducing gum and varnish build-up. The oil can be used on all gas ethanol and diesel fuel blends and well in synthetic, conventional, and 4 & 2 cycle oil.

When you add Marvel MM13R Mystery Oil to your oil, it prevents clatter and valve sticking, promotes easy cold weather starts, and strengthens the properties of engine oil. It also prevents and reduces sludge and acid formation and prevents breakdown, which could be caused by extreme temperatures.

When using it on oil, replace 20% of either your synthetic or traditional oil with the Marvel MM13R Mystery Oil. Ensure you use the marvel mystery oil every time you change your engine oil to get optimal performance. When using it on fuel, add 4 ounces of Marvel MM13R Mystery Oil to your 10 gallons of diesel or gas. Using this oil regularly may improve your fuel economy. 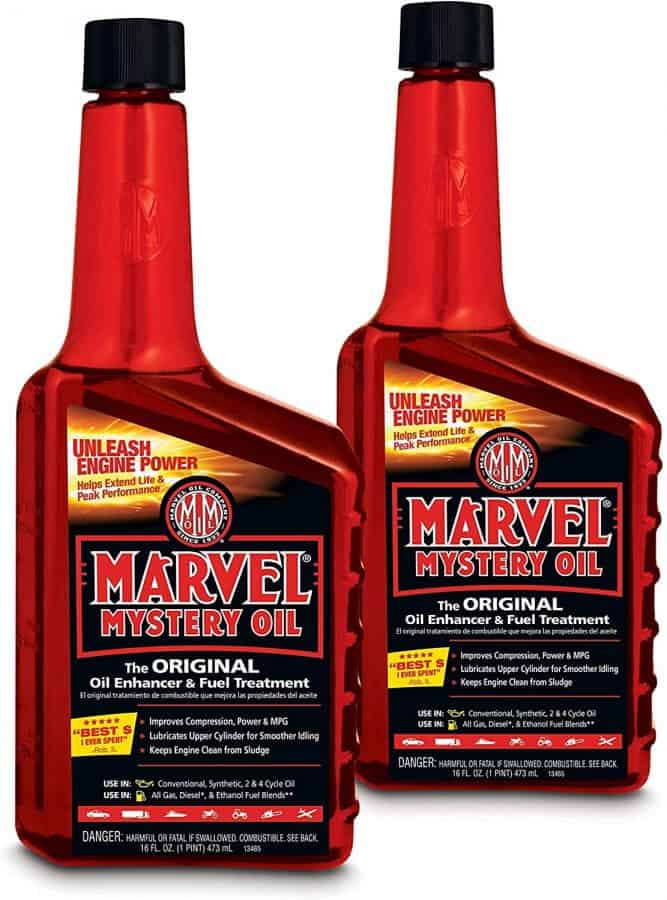 Marvel Mystery Oil MM12R helps you to get optimum performance and power of your vehicle while extending its engine life. It is an oil enhancer and fuel treatment that cleans the engine of your vehicle from the inside. It also protects the vehicle against power extremes and increases fuel economy. Using Marvel Mystery Oil MM12R regularly in your fuel and oil results in a quieter and smoother engine.

Just like other marvel mystery oils, Marvel Mystery Oil MM12R can be used in synthetic, conventional, and two- and four-cycle oil. In case you want to put it in oil, replace 20% of your conventional or synthetic oil with mystery oil. It is advisable to use the marvel mystery oil every time you change your oil for you to get maximum benefits.

Is Marvel Mystery Oil good or bad? From the Marvel Mystery Oil reviews, the additive is known for reducing friction and cleaning. The oil also helps in the lubrication of the fuel system and engine of the vehicle, thus increasing their life span. On top of been used as an oil additive, it can also be used as penetrating oil, corrosion inhibitor, and in automatic transmissions as a seal lubricator or leak stopper.

Marvel Mystery Oil also has other benefits to the engine. It creates a top ring seal which produces a higher compression. It also prevents blow-by on power strokes, thus resulting in more power. The mystery oil reduces engine wear and improves gas mileage.

How to Use Marvel Mystery Oil

The best way of using this oil is by mixing it with the gasoline in your fuel tank. It should be added like an upper cylinder lubricant. You can mix 4 ounces of Marvel Mystery Oil with 10 gallons of fuel. The oil then goes through the carburetor together with the fuel, gets into the combustion chamber, and later kindles with gasoline.

The MMO later evaporates and soaks in any build-up of carbon within the combustion chambers mostly between valve stems, guides, and around the rings. This makes the build-up loosen up eventually, and the carbon residue gets out through the exhaust system. The manufacturer’s state on the Marvel Mystery Oil can that it later leaves a lubricating residue after the process of combustion.

How to Add Marvel Mystery Oil Step by Step

In the Motor Oil

In the Fuel System

Q. Should I Use Marvel Mystery Oil?

Marvel Mystery oil has a very positive impact on your vehicle. The oil can be used in your conventional or synthetic oil blend. It is best to use the oil every time you have an oil change. The convention is the same for both diesel and gas engines. However, for diesel engines, you can add the oil at 300 to 500 miles before you change to get a better clean. Some reasons as to why you should use Marvel Mystery Oil is that it gives you optimum engine performance and improve your fuel consumption.

Q. When Should I Use Marvel Mystery Oil?

Q. Which is Better, Seafoam or Marvel Mystery Oil?

The seafoam, on the other hand, is better for fuel stabilizing. It is also good for flushing the vehicle’s system, cylinders, valves, and lubricating pistons without damaging the engine. Seafoam is only used in fuel, but MMO is ideal for both fuel and oil use. The former is much more expensive compared to Marvel Mystery Oil.

Marvel Mystery Oil helps to reduce oil consumption but only if the excess consumption is due to carbon build-up. However, if it is due to a mechanical issue, you might need to check the PCV valve first. This oil does not cause any harm unless you use it excessively. Just make sure you add the recommended amount, which is 20% of your oil. Using more of it may trip a check engine light in vehicles that are emission sensitive or increase vehicle emissions.

Most engineers recommend the use of Marvel Mystery Oil. They actually advise drivers to double up the recipe of the fuel in case they note any signs of sticky valves or gum and carbon build-up in the engines. When you note any sludge or carbon within the engine, add some mystery oil around 5 hours before you change the oil to get rid of them. The residue that mixes with the oil is removed the next time you change the oil.

Going through the above Marvel Mystery review, you are able to understand its benefits to your vehicle. It is recommendable for you to add the MMO every time you fill up your car with fuel. In case you are using the oil as a supplement, then you are advised to add it every time you do an oil change. You can also add it to the engine oil up to 300 miles before the subsequent oil change.

Since motor oil comes in different properties and weights, it is crucial to consult the owner’s manual to see the type of oil recommended for the vehicle. Marvel Mystery Oil cleans the engine and controls the sludge in it. Among other benefits, it helps in lubrication and also removes any corrosion and rust in the engine. Using Marvel Mystery Oil today will with no doubt increase the performance of your vehicle’s engine and increase its useful life.