Engine problems and repairs are one experience most folks don’t want to experience. Would you? When a driver starts experiencing complications with the vehicle engine, they move towards trading or selling off the vehicle, thinking it is an expensive repair. Luckily, there are a lot of engine problems that are easier to fix than others.

A rod knock is one of these engine issues that might make you move towards trading or selling off your baby ride.

This article will unveil what rod knock is, symptoms of a rod knock, diagnosis, and how to fix it. We’ll explain in detail what you need to know and how to prevent rod knocks. Before we dive deep into all these, what is rod knock?

What is rod knock 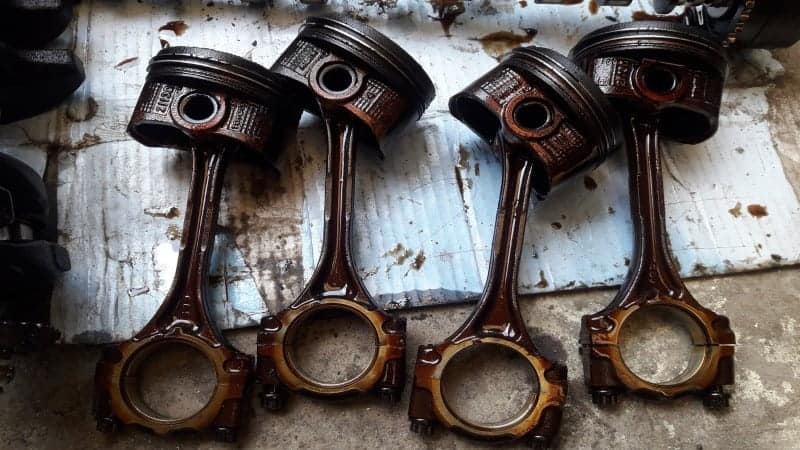 By default, car engines are manufactured with clearance tolerance for the bushing to fit in the crankcase journal.  The small clearance allows the engine oil to flow on the metal surface, preventing premature wear and tear. However, over time, the metal bushing between the con rod and the crank will start wearing off, resulting in rod knock.

What is spun bearing?

Spun bearing refers to the outcome of unfortunate circumstances in the engine cylinder bores. What do I mean? Spun bearing is the result you get when there is a lack of lubrication in the engine, and the crankshaft rotates with the bearing instead of turning inside the bearing.

This is usually caused by connecting rods or nuts stretching due to improper bolt torturing during an engine rebuild. Several other factors, such as lack of lubrication, excessive heat, and high operating loads, can cause the bearing to wear. There are several other factors that can cause a spun bearing. 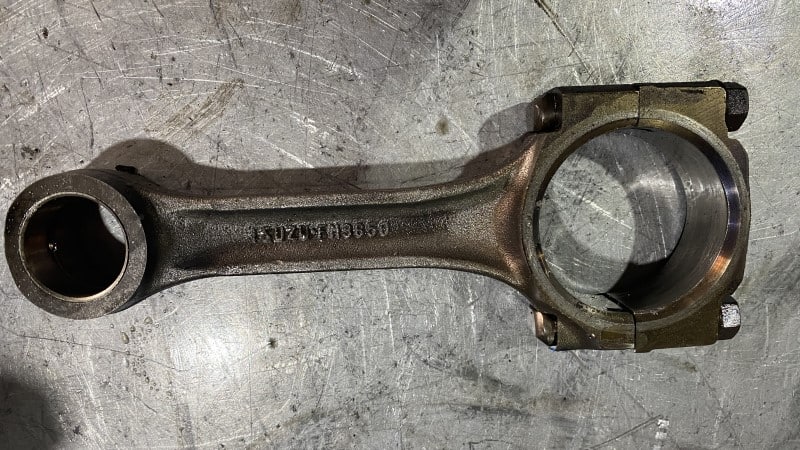 Like every other system component in your vehicle, there are a few symptoms that tell when you have a rod knock. These symptoms are as follows;

Knocking sounds: The most common rod knock symptom is a knocking sound. With a rod knock in place, you will hear a banging or knocking sound (as if someone is hitting metal on your iron door) when you turn on your car. The noise will increase as you step on the gas pedal.

Low oil pressure: When engine components like crankshaft, camshaft, and bearings start wearing out, the engine oil pressure will reduce. This is more noticeable when you first start up the car.

In some cases, it will trigger the check engine light and the oil light to display on your instrument cluster, indicating there’s an issue with the oil pressure. If these lights go off after a few minutes of idling or running the car and pressure returns, it indicates a rod knock.

As the motor oil flows in the engine, over time, it loses its density, viscosity rating, and lubricating properties. All these lead to engine sludge formation and internal corrosion.

Driving your car with a low oil level will result in low oil pressure and not circulate well where it should. This could result in excessive engine wear and damage. Several other mechanical problems can cause rod knocking. These include;

How to diagnose rod knock

Here are practical, proven steps on how to diagnose rod knock.

Check the state of the oil and oil level 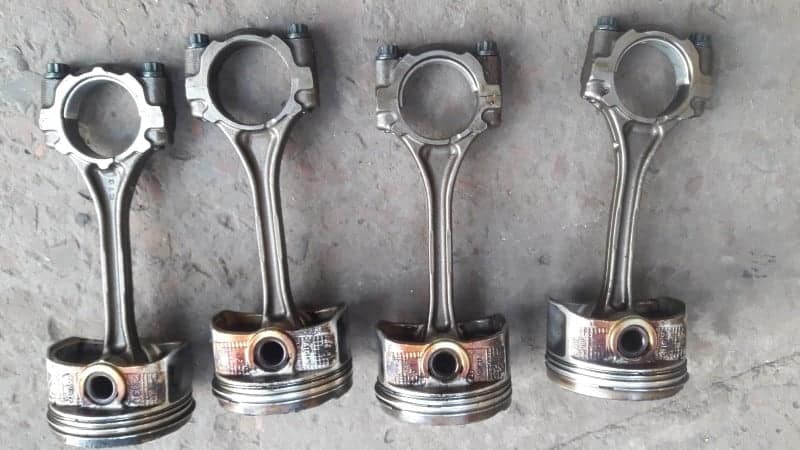 Drain the engine oil and inspect it

Get an oil catch pan close to avoid messing up the entire garage with oil. Before draining it, look at your engine cap to know the oil viscosity your engine uses. This is important, so you don’t replace the old oil with the wrong oil type.

Before draining the old oil, get a transparent container to take one cup of oil so you can take a closer look. After removing the sample for close inspection, drain the rest of the oil.

If you fail to carry out regularly scheduled oil changes, the oil will get old and start to erode the brass layers on the bearing. This happens mainly on the bearings far from the oil pump because they are getting low oil flow than the bearings closer to the pump.

You should also check the color of the oil. If it is dark brown, the oil is old or dirty and needs to be replaced. And if the oil is too light, consider replacing it. If you want to know how to extend the life of an engine with rod knock – it’s pretty simple. Always change oil at the right interval.

How to fix a rod knock

A rod knock is a sign that a problem lies in the interior components of an engine. As we explained above, several factors can cause rod knock; some are expensive repairs, while some are not. This doesn’t mean your engine is beyond repair.

However, before consulting your dealership or mechanic, there are a few steps you can take to reduce the rod knock and possibly stabilize your engine before carrying out a thorough repair.

Slide under your vehicle and place a catch pan directly under the draining plug. Get the sizeable socket size and wrench. Locate the draining plug on the crankcase and loosen it to drain the oil.

Drain the oil completely and reinsert the plug (the draining plug is also called a sump bolt)—Torque the sump bolt to the manufacturer’s spec.

Keep checking the oil as you pour in the new oil if you don’t know how many quarts your engine takes. A four-cylinder engine typically takes around 4-5 quarts.

Step 2: Remove the crankcase and inspect the cod rod bearing

A loosen connecting rod cap will cause knocking noise. Inspect the bolts holding the con rod with the lid and re-torque them. Consider inspecting the cod rod bearing and replacing them as needed.

Grimes and dirt might make their way into your gas tank when you refill your tank at the gas station.  When the fuel pump is transporting gas to the engine, it sends that dirt and grimes along, causing engine knocking.

Cleaning your fuel injection system will clear out those grimes and resolve the rod knock. If you have older vehicles that use carburetors, do not use a fuel injection cleaner. Instead, get a carburetor cleaner and spray it in the carburetor.

If your oil pressure is low or you have a low oil level, you’ll likely hear a splattering, tickling, or ticking noise from the engine. If this noise is from the valves, or lifters, adding or doing an oil change will stop the noise. But unfortunately, if the noise is rod knock, an oil change will not stop it.

As explained earlier, a rod knock is a sound indicating wear and damage to your engine system. So, changing to oil with a higher viscosity rating (heavier or thicker oil) will help eliminate or at least reduce the rod knock. It will potentially prolong your engine life. This doesn’t mean you should not diagnose and fix the cause of the knocking.

Q: How long will an engine last with rod knock?

If you have a rod knock in your vehicle, you might also be asking, ‘how long can you drive with a rod knock?’ Regardless of your question, once an engine starts to knock, nothing is too sure to determine how long it will last.

You can have a total breakdown the next time you start your vehicle, or it can keep working for 3-6 months. However, driving with rod knocks for a couple of minutes is not recommended. It can blow up your engine and keep you in the middle of nowhere.

Q: Can you hear rod knock at idle?

Q: What happens when you hear a rod knocking?

Rod knocking is a problem with the internal engine moving parts. Once it occurs, you’ll hear knocking or banging sounds, have low oil pressure, and check the engine light in your instrument cluster. If you fail to track down the cause and fix it in time, it will result in catastrophic damage to the engine.

Q: Is it worth fixing rod knock?

A rod isn’t a problem that will go out on its own. You should diagnose and fix the problem on time before it escalates. If you notice and fix the rod knock-on time, it won’t dig a hole in your pocket. So, it is worth repairing a rod knock at an earlier stage.

Q: How Much Does It Cause to Fix A Rod Knock?

Rod knock is one of those complicated engine problems that many folks overestimate, thinking it’s the end of the game with their car’s engine.

If you notice the problem earlier and take immediate action, your dealership or mechanic might resolve the problem without breaking your budget. However, if you notice and ignore the signs highlighted above fixing the issues might cost you a lot. At this point, replacing your engine might be the only option.