Here, we’ll discuss the possible causes and effects and how to fix rust or oil in coolant passages. You’ll also learn how to prevent rust from entering the cooling system. Before we forge ahead, kindly note that oil in coolant and coolant in oil are two different things. But first, let’s see what causes rust in the coolant system. 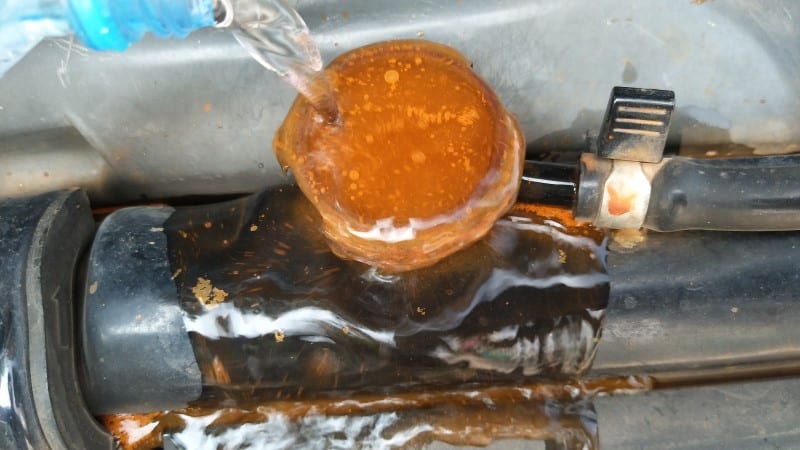 What causes rust in the coolant system?

Most cooling system components are made of metal materials. If you start running low on coolant levels, the areas that water is not touching will start rusting. The corrosion will not happen overnight. But once it starts, it’ll gradually affect other areas.

We understand that low coolant levels can cause severe engine overheating. But what you did not know is that if the coolant is not too low to cause overheating, it can cause the systems to start rusting.

Only water in the cooling system

Refrain from pouring only water into the coolant reservoir. If not, the water will oxidize the metal cooling system components, creating rust. These metal components include water pumps, impellers, and water pipes. Therefore, it is essential to use coolant or antifreeze instead of using only water.

We published a well-detailed article that explains when and how long you can use only water as a coolant. It also explains what type of water you should use.

Another common cause of rusty water in the coolant tank is using the wrong coolant type. Newer cars need enhanced coolant for optimal performance, and most cars have recommended coolants you should use. However, using the wrong type or mixing different coolants can affect the cooling performance.

Also, mixing different coolants can cause rust in coolant problem since these products are formulated with different compounds and solutions. The rust will likely start from the cylinder gaskets, water pumps, impellers, radiators, or radiator hoses.

Air in the cooling system

Another prevalent cause of rusty water in coolant reservoir is air in the system. Coolant stops traveling from the radiator to the engine block when you turn off your engine. So, the coolant will cool down since it no longer travels to the hot engine block as you switch off the engine. And it’ll contracts as it cools down. This contract causes air pockets in the system.

Not changing the coolant

Old coolant will cause rust inside the radiator once the coolant additives deplete. It’ll also have effects on heater core tubes, water pumps, and the coolant hoses as the rusty particles start circulating within the cooling system components.

Now that we’ve seen what causes rust in coolant, let’s see the effects of rust on the cooling system components. 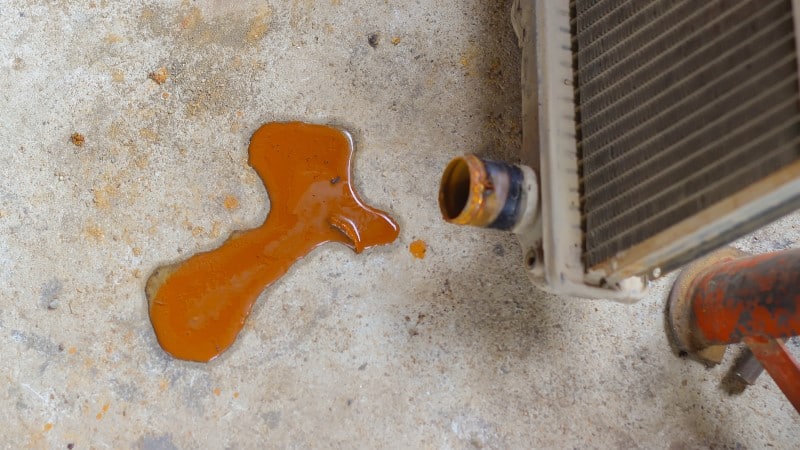 What happens if Rust in Coolant

Rusty sludge in coolant reservoir or the coolant passages will expand over time if you ignore it for an extended period. The rust may clog the radiator and the heater core. If this happens, you’ll experience cycle overheating issues and the heating system not working.

The heater core is a part of the cooling system and heating systems. So you’ll not get enough warm or hot air into the cabin when you turn on the climate control knobs. Overheating due to a clogged radiator can cause severe and expensive damage.

How to prevent Rust in Coolant?

As reiterated above, several system issues like low coolant levels, running with the wrong coolant type, mixing different coolants, old coolants, and air in the coolant system are the common causes of rust in the system.

If not prevented or rectified, these rusts will cause severe damage to the cooling system and the engine itself, leaving expensive repair bills on the table. Prevention is better than cure.

How do I get rust out of my coolant system?

The best way on how to remove rust in coolant is to flush the cooling system. Coolant flush involves draining and replacing the old coolant in the system with a reputable coolant flush. After that, run the vehicle for a week and drain & replace the coolant flush with the recommended coolant.

We published a detailed article that discusses how to flush the coolant and why coolant flush is necessary. It also reviews the best coolant flush in the market and how to make the right pick if you prefer to search for another flush.

Q: Can rusty coolant cause overheating?

Q: What does brown sludge in coolant mean?

Q: Is rust in radiator a problem?

A lot of rust in coolant will cause problems not only to the cooling system but to the engine and other parts of the vehicle. This is because oxidation happens everywhere, and it is a headache for the cooling system and the engine. For this reason, you should prevent rust from entering your radiator by following the precautionary measures listed above.

In general, dirty fluid is a threat to the overall engine performance. For example, a rusted or dirty coolant can cause coolant leaks, leading to overheating engine and a blown head gasket. These are issues that should be resolved on time to avoid causing catastrophic engine damage.

Flushing the coolant will curb the small rust on the cooling system, and applying undercoating or rust proof will prevent minor rust underneath the vehicle from spreading. For potential causes, efficient fixes, and preventive measures, check out this article – how to prevent car rust.

Q: What does brown water in radiator mean?

Brown water in the radiator means you have sludge in the cooling system. This usually results from dirt, debris, corrosion, or rust in the system. At first, this will only affect the system’s performance, but as the rust or corrosion increases, it’ll start causing severe system damage.

Q: How much does it cost to fix Rust in Coolant?

A coolant flush is an inexpensive way of keeping the engine coolant in a good state. Meanwhile, the cost of fixing rust in your coolant depends on a few factors. These factors include the coolant flush you want to use, the mechanic doing the fix, your region, and your vehicle type. However, you should budget to spend between $100 and $300 on average.

After removing the rust, you need to ensure that it doesn’t happen again by taking some precautionary measures.